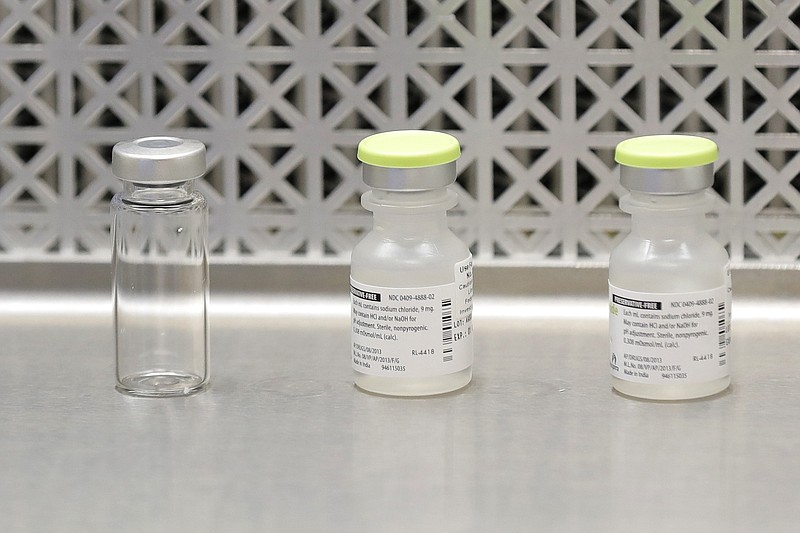 This March 16, 2020 file photo shows vials used by pharmacists to prepare syringes used on the first day of a first-stage safety study clinical trial of the potential vaccine for COVID-19, the disease caused by the new coronavirus, in Seattle. As the nation awaits a vaccine to end the pandemic, local health departments say they lack the staff, money and tools to distribute, administer and track millions of vaccines, most of which will require two doses. - Photo by AP Photo

Millions of Americans are counting on a COVID-19 vaccine to curb the global pandemic and return life to normal.

While one or more options could be available toward the end of this year or early next, the path to delivering vaccines to 330 million people remains unclear for the local health officials expected to carry out the work.

“We haven’t gotten a lot of information about how this is going to roll out,” said Dr. Umair Shah, executive director of Texas’ Harris County Public Health department, which includes Houston.

In a four-page memo this summer, the federal Centers for Disease Control and Prevention told health departments across the country to draft vaccination plans by Oct. 1 “to coincide with the earliest possible release of COVID-19 vaccine.”

But health departments that have been underfunded for decades say they currently lack the staff, money and tools to educate people about vaccines and then to distribute, administer and track hundreds of millions of doses. Nor do they know when, or if, they’ll get federal aid to do that.

Dozens of doctors, nurses and health officials interviewed by Kaiser Health News and The Associated Press expressed concern about the country’s readiness to conduct mass vaccinations, as well as frustration with months of inconsistent information from the federal government.

The gaps include figuring out how officials will keep track of who has gotten which doses and how they’ll keep the workers who give the shots safe, with enough protective gear and syringes to do their jobs.

With only about half of Americans saying they would get vaccinated, according to a poll from AP-NORC Center for Public Affairs Research, it also will be crucial to educate people about the benefits of vaccination, said Molly Howell, who manages the North Dakota Department of Health’s immunization program.

The unprecedented pace of vaccine development has left many Americans skeptical about the safety of COVID-19 immunizations; others simply don’t trust the federal government.

“We’re in a very deep-red state,” said Ann Lewis, CEO of CareSouth Carolina, a group of community health centers that serve mostly low-income people in five rural counties in South Carolina. “The message that is coming out is not a message of trust and confidence in medical or scientific evidence.”