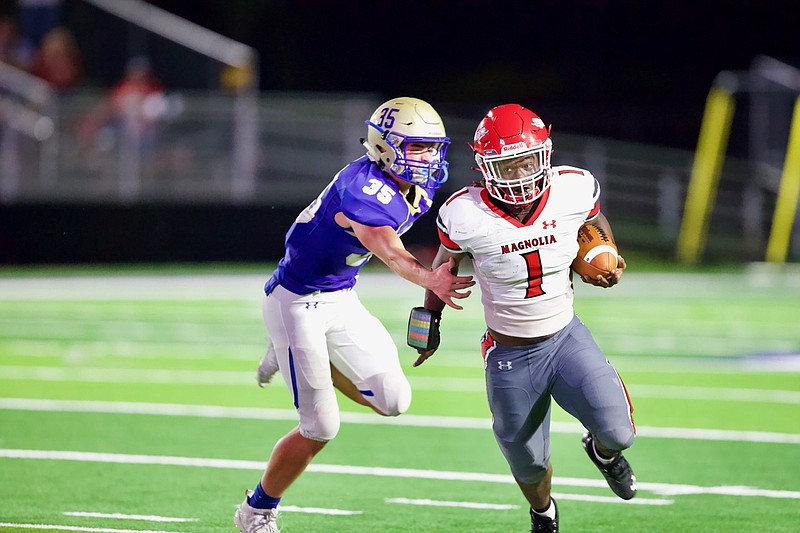 Magnolia’s Garrion Curry gets away from a Harrison Goblin during a 42-35 loss Friday night. The Panthers will travel to Crossett this week for a 7 p.m. game against the Eagles. - Photo by Bill Nielsen

“That’s what I wanted and that’s what I want for this program. I do believe we have the toughest schedule, and it was done on purpose. The better competition you play, the better you get (win or lose),” King said following a season-opening 42-35 loss to Class 5A third-ranked Harrison Friday night on the Little Rock Christian campus.

“We played hard and it was a big improvement from the scrimmage at Gurdon. Things don’t get any easier as we head to Crossett,” he said.

The Eagles are one of the top teams in Class 4A and made a deep run into the playoffs last season. The Panthers rallied from behind last season to score twice in the fourth quarter for a 36-30 victory.

Against Harrison, the Panthers had some explosive plays on offense, but couldn’t slow down Goblin quarterback Cole Keylon.

He threw for 265 yards and two touchdowns, while rushing for another 180 and a score.

The Panther defense was able to pick off three of Keylon’s passes.

While looking to score first, the Panthers quickly marched to the Goblins’ 18 before fumbling.

Two plays later, Keylon threw an 80-yard strike to Jordin Welch, who later rushed in from the 10 to make it 7-0.

With 5:04 to play in the first period, the Panthers answered with a 33-yard bruising touchdown run by Javorrea Murphy. Jay Todd Baker’s PAT put the finishing touch on the six-play, 65 yard drive and evened the score at 7-7.

Following a fourth-down reverse play to Marcus Harper, the Panthers tied the game again, 14-14, on a 7-yard run by James’Darious Smith. The drive covered 65 yards and took 12 plays.

Keylon continued his passing attack, hitting Noah Moix on a 26-yard strike, making it 21-14 with 8:30 left in the first half.

OVERSET FOLLOWS:Five minutes, Garrion Curry returned the ball 63 yards to even the game at 21-21.

The Panther defense stiffened again late in the first half as Kendrick Carey intercepted a Keylon pass and returned it 93 yards before being tackled at the 1 with four seconds remaining.

King opted for the touchdown instead of the field goal. Another fumble resulted in a deadlock halftime.

Magnolia took its first and only lead of the game when Curry scored from the 23 early in the third to make it 28-21. He finished with 128 rushing yards and two touchdowns.

They then recovered an onside kick, but defensive back Treston Johnson came up with an interception a play later.

Magnolia’s defense forced the Goblins to punt again, but wasn’t able to move the ball during the closing seconds.

“The kids really played hard. Harrison is a good team, but you can’t put the ball on the ground four times against a good football team,” said King. “That was the difference in the ballgame, especially the one inside the 20 and the one before halftime.”

The coach said Magnolia had its chances and the defense came up with some big plays at times.

“We made some stops in the second half when we needed to. I’m proud of my kids because they fought hard,” he said.

The coach said the Panthers could’ve easily quit after getting down two scores with about seven minutes to go.

“Overall, if we can get better every week, we are going to be alright. We just have to keep work hard and correcting the mistakes,” he said. “We are young and still without some players, but I think we are going to end up being a pretty good football team.”