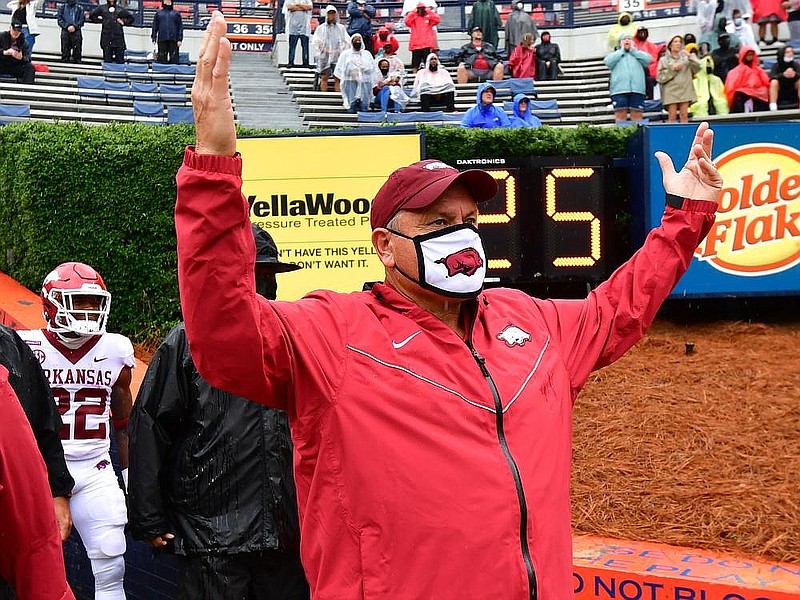 Arkansas coach Sam Pittman raises his arms during a game against Auburn. After an open week, the Hogs will be back in action Saturday at Texas A&M. - Photo by AP Photo/Butch Dill

FAYETTEVILLE — University of Arkansas Coach Sam Pittman is expecting a large, loud crowd at Texas A&M’s Kyle Field when the Razorbacks resume play Saturday after a shared open date with the Aggies.

“We expect at least 50,000 people, probably,” Pittman said on his weekly video news conference. “We are cranking up the volume, and we are going [to practice] inside today.”

Florida Coach Dan Mullen, who witnessed and heard the Kyle Field atmosphere first hand, advocated after that game for Gator fans to be allowed to “pack the Swamp” for his team’s remaining home games. Florida has not played since then, as it has had back-to-back home games against LSU and Missouri postponed due to covid-19 concerns, with a rescheduled game against Missouri looming Saturday.

The Razorbacks (2-2) have been solid on the road so far with the pandemic suppressing crowd counts. Arkansas upset No. 16 Mississippi State 21-14 on Oct. 3 before a crowd of 13,564 in Starkville, Miss. The next week, a blown officiating call prevented the Razorbacks from closing out what would have been a victory at No. 13 Auburn before a crowd listed at 17,490 on a rainy day. Instead, the erroneous call allowed Auburn to kick a field goal in the final seconds of a 30-28 win for the Tigers.

Pittman said the Razorbacks got in three days of light Texas A&M game planning last week before introducing the very specific blueprints for the Aggies on Monday.

“Last week we treated it as A&M basic game plan, so we tried to introduce all those things,” Pittman said. “The introduction, actually, for A&M will be today. What we decided was we were going to make this into a regular week once we got here. We decided we like the preparation that we’ve been having.

“So we basically used those three days as base game-plan introduction. Today we will introduce everything on Texas A&M and we will have a regular Monday practice.”

The Razorbacks are shaping up to be healthier on both sides of the ball than they’ve been since the season opener, if not quite fully healthy.

Cornerback Montaric Brown is expected to be closer to full strength after suffering an upper body injury at Mississippi State that kept him out of the next two games. In his absence, the cornerback situation has evolved.

His replacement, Hudson Clark, won SEC freshman of the week honors for his three interceptions in a 33-21 win over Ole Miss. The other starting cornerback, Jerry Jacobs, opted out on the rest of the season one week after freshman Khari Johnson started in his spot against the Rebels.

Pittman said when reserves come in, play well and merit more playing time, those contributions are weighed when a starter returns to health.

“You just let them both rep and you have to make a decision,” Pittman said. “It’s a good problem to have. But you certainly want to give opportunity to both individuals to have a chance to start and have a chance to go out there. The starting part I think means more to the kids than it does to the coaches, obviously. We just want to be able to play the two guys that’s been playing well.

“The guy that’s earned the playing time for coming off the bench because of an injury or something like that, we certainly will respect that, what he’s done in games, too.”

Linebacker Bumper Pool (shoulder) and defensive end Dorian Gerald (ankle) should both be closer to returning by Saturday. Pittman classified Gerald as one of the “iffy” guys on the roster.

“Dorian Gerald, I would love to have him back on Saturday, but it’s Monday,” he said. “We’ll see how he looks today. We just don’t know, but certainly we hope we have him back.”

Gerald has not played since the season opener, while Pool missed the win over Ole Miss after coming off the field with a stinger against Mississippi State, then another shoulder issue at Auburn. He returned in both games.

Pittman sounds enthusiastic about the game plan the staff has put together to face the Aggies and how the Razorbacks mentally refreshed during the bye week with no live tackling.

“I just thought we had really good mental work, mental preparation on A&M, on our game plan and on what we’re going to try and get accomplished,” he said. “I really like the plan on all three sides of the ball and all three different areas of the game.