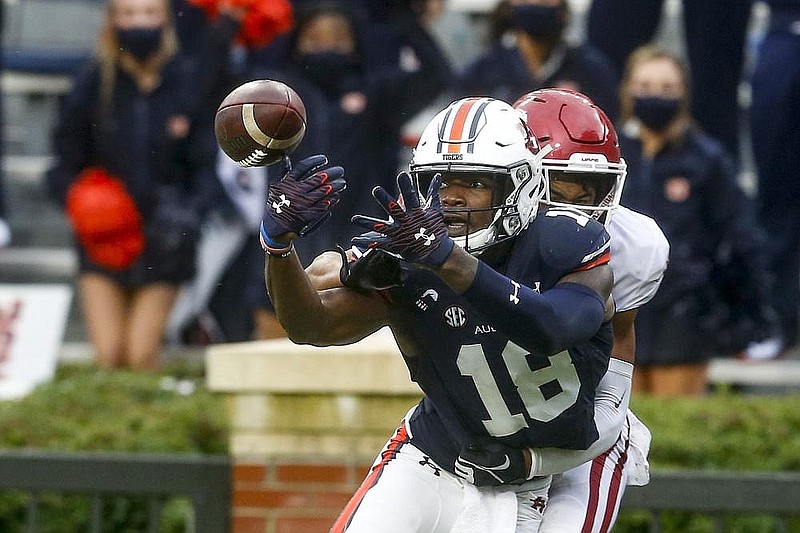 n Auburn wide receiver Seth Williams (18) tries to catch a pass as Arkansas defensive back Khari Johnson (19) defends. The Razorbacks have an open date this week before resuming play at No. 7 Texas A&M on Oct. 31. - Photo by AP Photo/Butch Dill

FAYETTEVILLE — Ole Miss Coach Lane Kiffin made sure to mention the defensive improvements he’d seen from the University of Arkansas when he spoke with Coach Sam Pittman prior to Saturday’s game.

“Like I told Sam before the game, I don’t know if there’s a better job in the country of what a defense looked like last year compared to this year and how they play,” Kiffin said. “The same players for the most part.”

After Pittman was hired in December, he brought in Barry Odom — fired after four seasons and a 25-25 record at Missouri — as defensive coordinator.

“Barry’s just done a great job,” Kiffin said. “We saw them the first half versus Georgia, saw them the whole game against Mississippi State and now against us.”

The Rebels, averaging a national-best 573.0 yards, were held to 442 by the Razorbacks.

Arkansas forced seven turnovers, twice stopped the Rebels on fourth down at the goal line and scored two touchdowns on interception returns.

Pittman made sure to praise the entire defensive staff when he was asked about Odom.

“Barry Odom is awesome,” Pittman said. “So is Sam Carter, so is Rion Rhoades and so is Derrick LeBlanc.

“Those guys on defense get their team ready to play. They have all kinds of tendencies. Where the back is, who is inside, who is outside and where numbers are. They have it cut up for the kids and the kids obviously watch it.

“We’re talented. We’ve got a talented group. We’ve got a resilient group. We have a group that can catch passes on defense and return them for touchdowns.”

The Razorbacks’ defense that excelled was missing three starters due to injuries: linebacker Bumper Pool, cornerback Montaric Brown and end Dorian Gerald. Another starter, cornerback Jerry Jacobs, played off the bench after being injured last week.

That hasn’t stopped the Razorbacks’ staff from orchestrating a remarkable turnaround through four games after Arkansas ranked 110th nationally in total defense in 2019.

“They do a great job of keeping the ball in front of them and limiting explosive plays, which has been what we’ve relied on a lot,” Kiffin said. “So good game plan.”

Ole Miss led the nation with eight plays of 40 or more yards before the Arkansas game. The Rebels’ longest play Saturday was a 34-yard pass from Matt Corral to Elijah Moore.

“This is a great league, a physical league,” said Pittman, who previously was an offensive line coach at Tennessee, Arkansas and Georgia. “We understand that, but I also said from Day One that we’re the University of Arkansas, we damn sure belong in the SEC. And we do.”

Along with an impressive defensive performance, the Razorbacks got enough offense — particularly with Treylon Burks producing 137 yards receiving and 46 rushing – to win their first SEC home game in four years, since beating Florida 31-10 on Nov. 5, 2016.

“We’re starting to believe in each other,” Burks said. “I just like the fact that we’re playing as a team.

“We’re not playing selfish. We’re one unit, one goal is to win. It’s showing on Saturdays, so that’s what I’m proud of.”

Pittman was asked about the Razorbacks (2-2) keeping their composure — rather than falling apart as often was the case in going 4-20 and 0-16 in the SEC the last two seasons – after Ole Miss executed a successful fake punt to set up a touchdown that cut Arkansas’ lead to 26-21 in the fourth quarter.

“I don’t want to talk about last year’s team to be honest with you,” Pittman said. “We’re in Week Four. Our team hasn’t gotten rattled ever. I’m proud of them.

“I know what you’re saying. You’re giving us a compliment and I appreciate it.”

The Razorbacks, who have an open date this week before resuming play at No. 7 Texas A&M on Oct. 31, could get some of their injured players back for the Aggies.

“You know what’s amazing?” Pittman said. ‘We can be a lot better than what we’re playing right now.

“Our kids understand that. I didn’t say I’m disappointed. I’m not disappointed at all, but I’m saying we can be a lot better.”