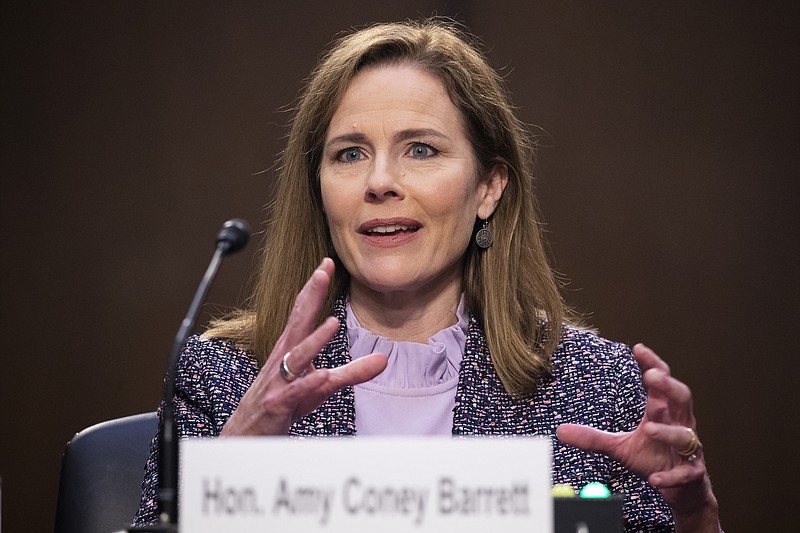 WASHINGTON — Supreme Court nominee Amy Coney Barrett presented herself in Wednesday’s final round of Senate confirmation questioning as a judge committed to a strict reading of the Constitution, holding deep personal and religious beliefs but vowing to keep an open mind on what would be a 6-3 conservative-majority court.

Senate Republicans are championing President Donald Trump’s pick, an appeals court judge who adheres to an “originalist” constitutional approach. Doubtful Democrats are digging deeper into the judge’s views on health care, abortion, racial equity and voting rights, but they are running out of time to stop her quick confirmation.

The conservative late Justice Antonin Scalia was her mentor, but Barrett said when confronted with his rulings and outspoken comments that she is her own judge.

The 48-year-old Indiana judge was being asked about several of Scalia’s decisions, some controversial. She did not respond directly to Sen. Dianne Feinstein, the top Democrat on the panel, who asked whether Barrett agreed with Scalia’s view that the civil rights era Voting Rights Act was a “perpetuation of racial entitlement.”

Barrett said Scalia’s approach — “originalism and texturalism” — is hers as well. But without discussing the specifics of that case, she called the Voting Rights Act a “triumph in the civil rights movement.”

When Democratic Sen. Chris Coons of Delaware ran through several of Scalia’s opinions including his dissent in the landmark 2105 Obergefell v. Hodges gay marriage case he wanted to know just “how closely” she stood by his views.

“I hope you’re not suggesting I don’t have my own mind,” Barrett said.

Her nomination to replace the late Justice Ruth Bader Ginsburg has ground other legislative business to a halt as Republicans excited by the prospect of tipping the court balance to conservatives race to confirm her over Democratic objections before Election Day.

Sen. Lindsey Graham, R-S.C., opened the final day of her testimony praising Trump’s nominee as an “unashamedly pro-life” conservative who is making history as a role model for other women.

“She’s going to the court,” Graham said. “This is the first time in American history that we’ve nominated a woman who’s unashamedly pro-life and embraces her faith without apology.”

Democratic Sen. Dick Durbin of Illinois agreed Barrett is making history — but as the first nominee considered so close to a presidential election, tapped to fulfill the president’s public quest to install a ninth justice in time to undo the Affordable Care Act in a case heading to the court Nov. 10.

Durbin called Trump’s intent to dismantle the health care law a cloud — “an orange cloud” — over her nomination, a political slam at the president’s tan.

Barrett’s nomination has been the focus at a Capitol mostly shut down by COVID-19 protocols, as Americans struggle during the pandemic, and Congress is delayed by bickering over differences in providing more aid. The virus has hung over the proceedings after Trump introduced Barrett at a Rose Garden event that apparently spread COVID. Two senators on the panel who attended have been stricken.

The former law school professor, who had little trial court experience before being confirmed to the appellate court in 2017, did not stray from her disciplined refusal to disclose her views on specific issues, saying it’s not appropriate without consideration of the actual facts of any given case. “I would of course keep an open mind,” she told senators at various points, including on whether to allow cameras in the courtroom.

As Democrats probed Barrett’s views, Durbin asked Wednesday if her strict adherence to originalism means a president could not “unilaterally deny the right to vote” based on race, noting restrictions on mail-in ballots being erected in several states before Nov. 3. She agreed there are “many laws” that protect the right to vote, including the 14th and 15th Amendments to the Constitution, but stopped short of a blanket statement: “I really can’t say anything more.”

Sen. Patrick Leahy, D-Vt., asked what she thinks of Trump’s view that he can pardon himself. Barrett said a president’s ability to pardon himself has never been tested in court and the question calls out for “legal analysis.”

In some ways it was an extension of Tuesday’s long and lively session as she declined to say whether she would recuse herself from the upcoming health care case or any election-related disputes involving the heated race between Trump and Democratic nominee Joe Biden. Along with trying to undo the health care law, Trump has publicly stated he wants a justice seated for any disputes arising from the election, and particularly the surge of mail-in ballots expected during the pandemic, as voters prefer to vote by mail.

Barrett testified she has not spoken to Trump or his team about election cases, but skipped past Democrats’ pressing questions about ensuring the date of the election or preventing voter intimidation, both set in federal law, and the peaceful transfer of presidential power. She declined to commit to recusing herself from any post-election cases without first consulting the other justices.