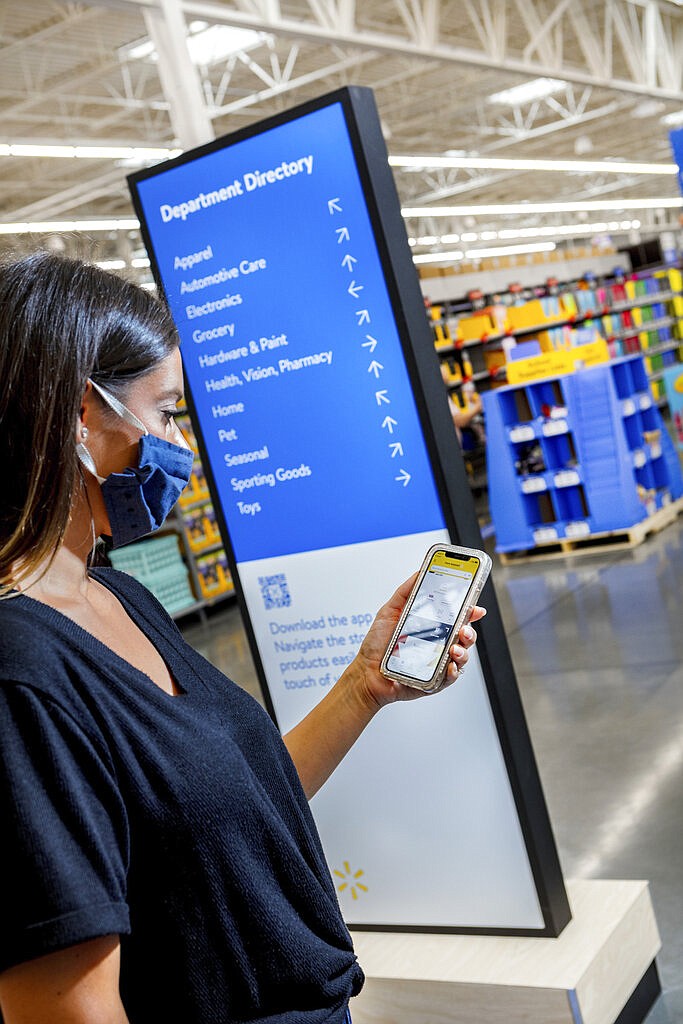 In this July 2020 photo provided by Walmart, a woman looks at her smartphone near a digital store directory inside the Walmart Supercenter in Springdale, Ark. Walmart is getting inspiration from the airport terminal as it revamps the layout and signage of its stores to speed up shopping and better cater to smartphone-armed customers. (Mark Steele + FITCH/Courtesy of Walmart via AP)

NEW YORK (AP) — Walmart is getting inspiration from the airport terminal as it revamps the layout and signage of its stores to speed up shopping and better cater to smartphone-armed customers.

The nation’s largest retailer, based in Bentonville, Arkansas, said that the look, which includes signs with bold dimensional typeface spotlighting sections, is currently in one store. It will be rolled out to 200 stores by early next year. with plans to add another 800 stores by early 2022. Walmart says it was working on a new store layout a year ago. But the pandemic accelerated those efforts as customers are increasingly focused on contactless shopping amid safety concerns.

“We were inspired by airport wayfinding systems as best-inclass examples of how to navigate large groups of people,” says Janey Whiteside, executive vice president and chief customer officer at Walmart’s U.S. division, in a corporate blog.

As part of the overall signage, the exterior and interior of the stores will reflect the Walmart app icon. As customers enter the store, they will see colorful iconography and a store directory that encourages them to download and use the Walmart app while they shop. It says its aisles will feature letter and number combinations to guide customers from phone to products.

It’s also featuring dedicated sections within the store for toys, baby products and other areas. Shoppers who don’t use their smartphones for shopping will still benefit with the bigger signs, which will help them find items, Whiteside noted.