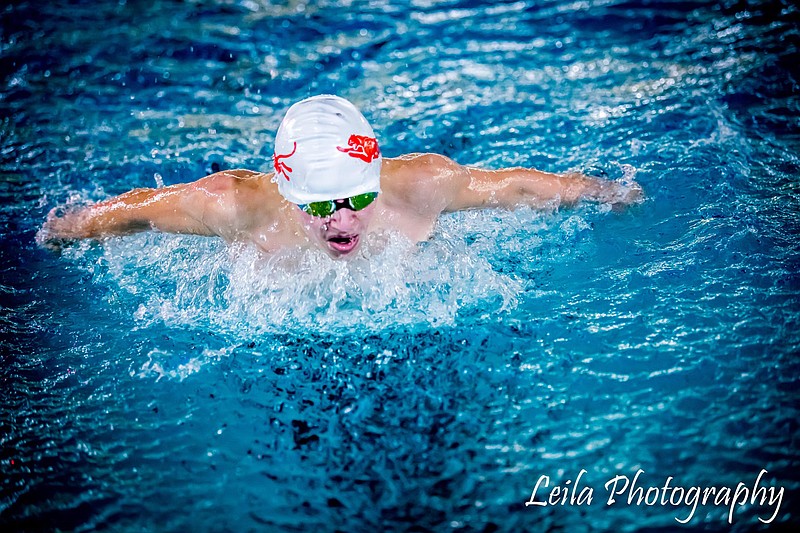 Carson Waters battles in the butterfly competition during Magnolia’s first swim meet of the season. The Panthers and Lady Panthers placed first in the three-team event. On Dec. 12, MHS will compete against other teams at Texarkana’s Texas High School Aquatics. - Photo by Lelia Photography

EL DORADO – The Magnolia Panthers and Lady Panthers jumped into the water for the first time this season and placed first in an event at El Dorado.

The MHS Swim and Dive Team competed Nov. 12 against the El Dorado Wildcats and the Camden Fairview Cardinals.

Magnolia swimmers placing first in both the 50m freestyle and 100m breaststroke were Cecily Sanchez and Harrison McWilliams.

All of the MHS relays, except the boy 200m Medley Relay, also placed first in the meet.

“This was a great way to start the season. Our next meet is Dec. 12 at Texarkana High School Aquatics, where the new MHS divers will get their first time to compete this season,” said swim coach Kathleen Dingman.

“It’s a long story but no other team in the state put in a bid, so Magnolia did thanks to Superintendent John Ward and Athletic Director Dyun Long. It was approved to be in Texarkana since it is a border town, even though the facility is in Texas. Crazy year for all of us, but we are excited to host the state meet,” said Dingman.