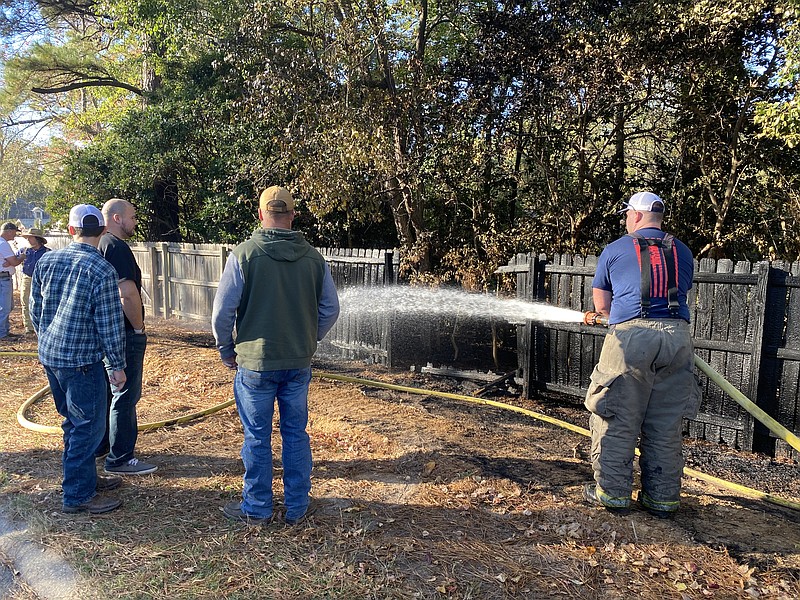 Emergency responders spray water after a fire destroyed a section of fenceline Monday on Columbia Street in Magnolia. No official statement on the cause of the blaze had been released at press time.

A small fire overtook a section of fenceline on Columbia Street in Magnolia around 3:05 p.m. Monday. City and volunteer firefighters alike responded to the blaze with city police officers on the scene.

Several yards of fenceline were reduced to a charcoal-like consistency with ash surrounding each side of the fence. Because of the pine straw and other dry materials on the ground, the fire spread about four feet on the street-facing side of the fence. Inside the fence, some low hanging branches burned, but the fire’s spread was put to a halt by emergency services before it could overtake the ground foliage.

One neighbor on the opposite side of the street stated that she walked outside at 3 p.m. to clean up the brush in her backyard and after a few minutes, returned to her front yard to see the fence on fire. She stated that she did not hear any passing traffic or any other indication as to why the fire started. She called emergency services and pulled a chair out onto her porch to watch the blaze. Another neighbor commented that she thought it may have been due to a cigarette from a passing vehicle.

No official statement on the cause of the fire has been released at this time.