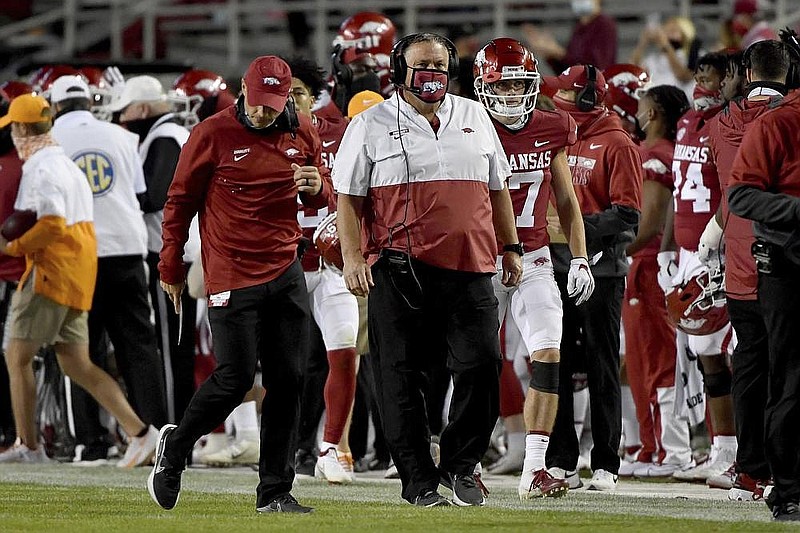 Arkansas coach Sam Pittman heads to the locker room at halftime during Saturday’s game with Tennessee. - Photo by Associated Press

Pittman said he is asymptomatic and was tested again Monday to confirm the positive diagnosis. The results of that test will not come back until Tuesday.

If Pittman tests negative Monday, he must test negative two more times in order to coach the Razorbacks at No. 6 Florida on Saturday.

Pittman’s positive test came during scheduled Sunday testing for the football team, which is tested three times each week. He said he learned of the positive test at 6:30 a.m., Monday and was the only member of the team to test positive.

“I wish I wouldn’t have gotten the covid,” Pittman said. “To be honest with you, I haven’t done anything different than what I’ve done ever since (the previous week’s test).

Pittman is quarantining in his home. He will continue to participate in team meetings virtually this week.

Defensive coordinator Barry Odom will serve as Arkansas’ interim head coach while Pittman is in isolation. Odom spent the previous four seasons as head coach at Missouri where he had a 25-25 record.

In August, Odom credited Pittman’s organizational plan that was put in place in the event he tested positive for the virus.

“He’s done a heck of a job,” Odom said at the time. “I’m fortunate that we have the staff that we do. I think — knock on wood — that’s not going to happen, but if something like that were to happen the staff is so great, I would be able to continue to do the things we need to do on defense and then obviously (offensive coordinator) Kendal (Briles) and I would spend a lot of time going into that game on the management of what that’d look like.

“You have to plan for everything, I understand that. I don’t really know that we change that much. I am fortunate that I’ve got in-game experience of sitting in that chair for the last four years. I think we’d be able to manage and it wouldn’t happen without the staff we have here in place, for sure.”

The Razorbacks (3-3) are coming off of a 24-13 victory over Tennessee on Saturday and Pittman has been mentioned as a candidate for SEC coach of the year.

He is the third SEC coach to test positive for the virus this season. Alabama coach Nick Saban had a false-positive test last month and was able to coach a high-profile game against Georgia later the same week following three negative test results.

Florida coach Dan Mullen also tested positive for the virus last month. Mullen’s positive test was part of a large outbreak on the Gators’ team and he did not miss any games because Florida had two games postponed.

Odom has coached against Florida four times and has a 2-2 record against the Gators. In 2018 he recorded arguably the biggest victory of his career when Missouri won 38-17 at No. 13 Florida.