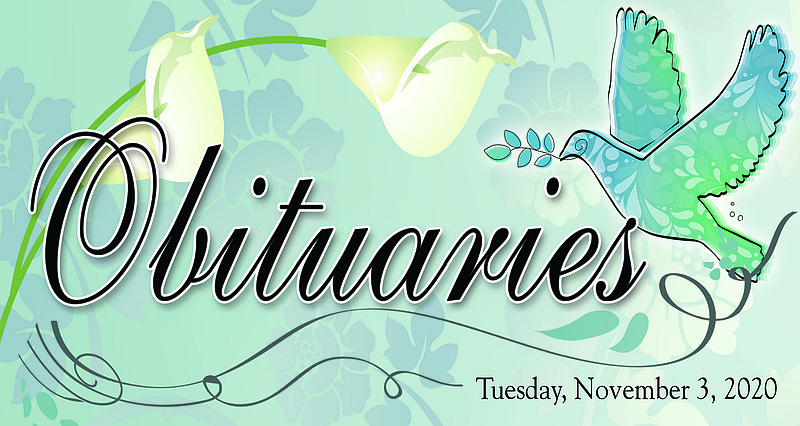 Michael was born December 20, 1960 in Chicago, IL. He served in the United States Marine Corp and worked in the construction industry. He was a member of the Fraternal Order of Eagles Aerie #4259.

Michael is preceded in death by his parents James “Jim” C. McKinnis and Harlene Jean (Armstrong) McKinnis Heehler and infant brother Jackie McKinnis. He is survived by his

Graveside services will be held on Saturday, November 7, 2020 at 2 p.m. at the Western Cemetery in Plainfield, AR with Bro. Elvis Griffin officiating under the direction of Lewis Funeral Home, Inc. in Magnolia.

Gwendolyn Callicott Gill, 78, of Arlington, TX passed away Tuesday, October 27, 2020 at home surrounded by her family.

Gwendolyn was born November 18, 1941 in Waldo, AR to the late Harvey “Pete” and Virginia (Herring) Callicott. Gwendolyn married her high school sweetheart in October 1961 and was a devoted Navy wife for 20 years to her late husband Joe H. Gill. She retired after 32 years from Cardinal Health. Her family was her priority in life. She touched so many people with her kind and selfless spirit and made it no secret that her strength came from her Lord and Savior Jesus Christ.

Graveside services will be held on Wednesday, November 4, 2020 at 10:00 a.m. at the Shiloh Cemetery in Lamartine, AR under the direction of Lewis Funeral Home, Inc. in Magnolia.

Memorial donations may be made to the Arthritis Foundation, www.arthritis.org/donate

Edward was born April 6, 1939 in Richmond, VA. He served in the United States Army during the Vietnam War and retired as Lieutenant Colonel after 22 years of service. After retiring from military service, he taught technical drafting and welding at Magnolia High School for 20 years and after retiring from teaching he worked for 5 years at Farmers Bank and Trust Company in Magnolia.

Edward formerly served on the Board of Abilities Unlimited and the Board of Magnolia Country Club. He was a member of Central Baptist Church and the Warnock Springs Deer Camp. He enjoyed gardening and loved to hunt, fish, and play golf with his friends.

Graveside services will be held on Friday, November 6, 2020 at 2 p.m. at the Magnolia Memorial Park Cemetery with Military Honors under the direction of Lewis Funeral Home, Inc. in Magnolia. Visitation will be Thursday, November 5 from 6:00 to 8:00 p.m. at the funeral home.

Memorial donations may be made to Central Baptist Church, 207 West Union, Magnolia, AR 71753

Harold Fredrick Cheatham, 86, of Taylor, Arkansas passed away October 31, 2020. He was born April 24, 1934 in Stamps, Arkansas to Arthur and Ella Roberts Cheatham. Harold loved hunting, fishing, gardening and planting trees everywhere he went. He enjoyed fixing and flying airplanes and winding electric motors. He was a self-taught electrician. He loved to stay busy, spending most of his time outdoors and with family.

Dr. J.C. Phillips, 65, of Magnolia, AR, passed away, Sunday, Nov. 1, at his home. Arrangements are pending with R.L. Reed Funeral Home of Magnolia.