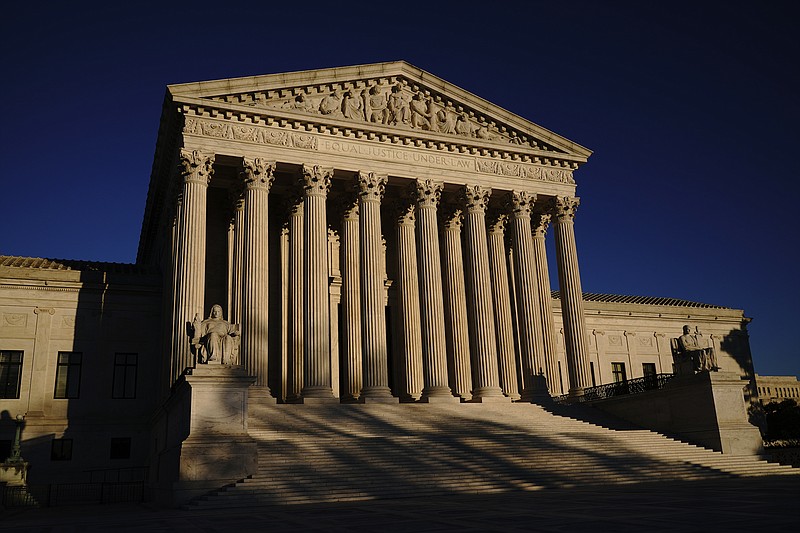 In this Monday, Nov. 2, 2020, file photo the Supreme Court is seen at sundown on the eve of Election Day, in Washington. The Supreme Court is to hear arguments in a case that could put the brakes on what has been a gradual move toward more leniency for children who are convicted of murder. - Photo by AP Photo/J. Scott Applewhite, File

WASHINGTON — The Supreme Court on Tuesday suggested it could halt what has been a gradual move toward more leniency for children who are convicted of murder.

In cases over more than a decade, the court has concluded that children should be treated differently from adults, in part because of their lack of maturity. But the court, which has become more conservative over the last few years, could decide not to go any further.

The justices on Tuesday were hearing a case about sentencing juveniles to life without parole. The court has previously said that should be rare, and the question before the justices has to do with what courts must do before deciding to impose a life without parole sentence on a juvenile.

During arguments, which the justices heard by phone because of the coronavirus pandemic, Justice Samuel Alito suggested the court has gone too far.

“What would you say to any members of this court who are concerned that we have now gotten light years away from the original meaning of the Eighth Amendment and who are reluctant to go any further on this travel into space?” Alito asked at one point, referencing the amendment’s prohibition against “cruel and unusual” punishment.

The case the court was hearing Tuesday is the latest in a series of cases going back to 2005, when the court eliminated the death penalty for juveniles. Five years later, the court barred life-without-parole sentences for juveniles, except in cases where a juvenile has killed someone.

Then, in 2012, the justices in a 5-4 decision said juveniles who kill can’t automatically be sentenced to life with no chance of parole. A related decision four years later said those sentences should be reserved “for all but the rarest of juvenile offenders, those whose crimes reflect permanent incorrigibility.”

The justices are now being asked whether a juvenile has to be found to be “permanently incorrigible,” incapable of being rehabilitated, before being sentenced to life without parole.

But the court has changed significantly in recent years. More conservative justices have replaced Justice Ruth Bader Ginsburg and Justice Anthony Kennedy, whose votes were key to the 2012 decision.

The specific case before the justices involves Mississippi inmate Brett Jones, who was 15 and living with his grandparents when he fatally stabbed his grandfather. The two had a fight in the home’s kitchen after Bertis Jones found his grandson’s girlfriend in his grandson’s bedroom. Brett Jones, who was using a knife to make a sandwich before the fight, stabbed his grandfather first with that knife and then, when it broke, with a different knife. He was convicted and sentenced to life in prison without the possibility of parole.