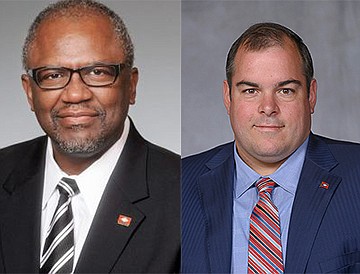 Representative David Fielding (left) and Republican candidate Charles Beckham (right) won their races in the AR State Congress. Fielding is the Democratic incumbent for House District 5 and has served as a state representative since 2011. Beckham won State Senate District 12 against the Democratic incumbent, Senator Bruce Maloch. Maloch has served in the State Senate since 2013.

Republican newcomer Charles Beckham bested incumbent Sen. Bruce Maloch (D), where the race in Columbia County saw Maloch leading by 555 votes but trailing behind in the rest of District 12, where Secretary of State records indicate a Beckham win with 16,696 votes over Maloch’s 12,894.

Presidential election results were not finalized in every state, but a clear winner was shown for the State of Arkansas with Secretary of State records showing President Donald Trump (R) with 750,790 votes over former Vice President Joe Biden (D) with 415,435. Columbia County residents voted overwhelmingly for the incumbent president, with 5,469 ballots cast for Trump and 2,781 votes cast for Biden.

In the election for US State Congress District 4, Representative Bruce Westerman came out on top with 187,170 votes over the 103,966 ballots cast for William Hanson (D) and the 12,832 ballots cast for Frank Gilbert (L). Westerman saw a win among Columbia County voters, who gave the incumbent 5,559 votes. Hanson trailed behind with 2,672 along with Gilbert receiving only 164 votes.

State Issues One and Two were passed by Arkansas voters, while Issue Three failed to follow through. Columbia County voters shared a common interest with the State majority on Issues One and Three, yet deferred to vote against Issue Two.

For Emerson residents who participated in the 2020 General Election, a potential 1% Sales and Use Tax to be levied on the town fell short in the vote, with 88 voters in support of the tax and 109 votes against.

A table showing election results for local elections in Columbia County is listed below: