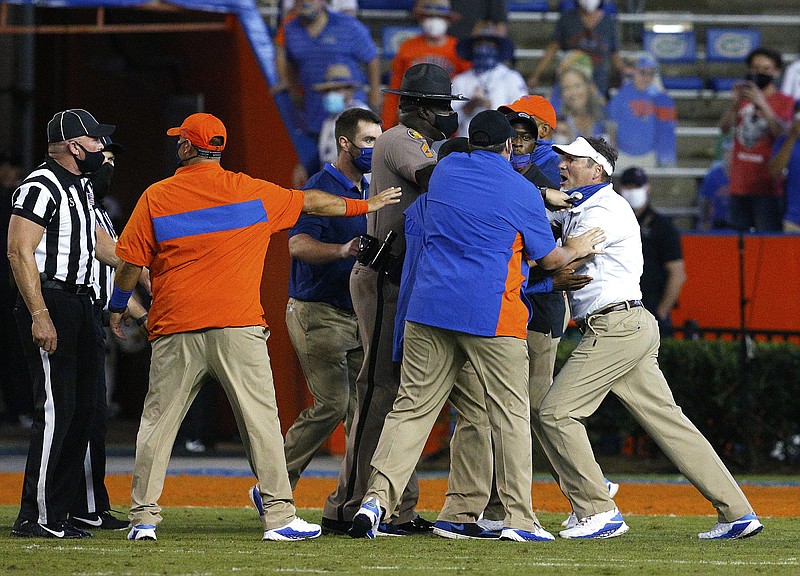 Florida coach Dan Mullen, right, is held back by coaches and law enforcement after a fight broke out at the end of the first half of the team’s NCAA college football game against Missouri in Gainesville, Fla., Saturday. - Photo by Brad McClenny/The Gainesville Sun via AP

GAINESVILLE, Fla. (AP) — Florida coach Dan Mullen did more to inflame than extinguish a tense situation against Missouri, drawing a public reprimand and a hefty fine.

The Southeastern Conference docked Mullen $25,000 on Monday for his role in a benches-clearing brawl against the Tigers on Saturday night.

The league also issued half-game suspensions for Missouri linebacker Chad Bailey, offensive lineman Dylan Spencer and defensive lineman Markell Utsey. Each of them will sit out the first half of Missouri’s next game, against No. 5 Georgia on Nov. 14.

Florida defensive lineman Zach Carter and linebacker Antwuan Powell, both ejected from the game for fighting, will be suspended for the first half against the Bulldogs next week in Jacksonville. NCAA fighting rules mandate an automatic half-game suspension for the ensuing game.

Missouri linebacker Tre Williams was ejected for a flagrant unsportsmanlike conduct foul and will not be punished further.

“There is no place in college football for the kind of incident that took place at halftime of the Missouri at Florida game Saturday night,” SEC Commissioner Greg Sankey said. “Everyone involved is responsible for meeting sportsmanship standards throughout each game.

“Running on the field to confront a game official, the gathering of teams in an on-field confrontation and student-athletes throwing punches are all disappointing at any time, but even more so as we work to support healthy competition during a pandemic.”

The suspensions could be significant for the eighth-ranked Gators (3-1), who were without 15 players against Mizzou. Some of the absences stemmed from injuries, others because of COVID-19 test results and contact tracing. It’s unclear how many of them will return against the Bulldogs, a game that likely will determine who wins the East Division and advances to the SEC title game.