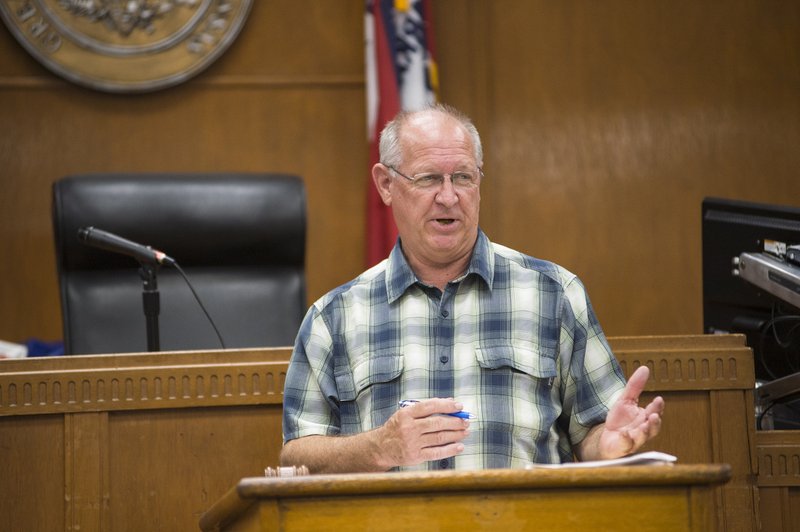 County Judge Denny Foster speaks during a May 4 Columbia County Quorum Court meeting in Magnolia’s downtown courthouse. The gathering was the first of the county’s governing board since March.

In its first meeting since March 18, the Columbia County Quorum Court on Monday held a relatively brief gathering where the primary topics of discussion included the passage of a resolution allowing for the purchase of personal protective equipment (PPE) from a local funeral home with connections to Columbia County Judge Denny Foster, as well as addressing solid waste issues.

The Court met in its traditional home on the second floor of the Columbia County Courthouse in downtown Magnolia, but the seating arrangements were far more spread out than usual. The local Justices of the Peace and other county officials and guests were well spread over the courtroom.

The agenda for the night included an ordinance authorizing the purchase of goods from the business of a spouse of a Columbia County officer due to “unusual circumstances.” The matter ultimately passed by a unanimous vote.

The issue at hand dealt with Columbia County’s need for PPE for its employees during what the federal, state, and local governments have deemed a state of emergency due to coronavirus. Lewis Funeral Home in Magnolia was stated as a PPE supplier for the county, but the mortuary has a direct family connection to Foster. To allow the equipment purchase, specific clauses in the resolution were needed to be passed by the Court.

Due to the county’s recent difficulty in obtaining an adequate supply of PPE from traditional vendors, the local funeral home was tapped as a supplier. The purchases from Lewis Funeral Home, according to the ordinance, will be limited only to those deemed necessary by the county judge or otherwise required by the state.

Another item of interest Monday dealt with the issue of solid waste. The discussion began during a committee report when JP Jason Ray noted that the wheels had.

recently been destroyed on his nearly brand-new green Columbia County garbage container. He stated that the container was only around two months old and that they had only traveled up and down his driveway, yet the wheels were already busted due to rough pickups by the County’s contracted solid waste provider WCA (Waste Corporation of Arkansas).

Frustrated by the issue, Ray noted that, when a new or relatively new container is rendered inoperable due to the solid waste provider, the county is left footing the bill to issue a new green garbage can.

“WCA is breaking our equipment, and then it’s a cost to Columbia County to have it fixed,” he said. “I think that’s an issue that needs to be addressed.”

Foster noted that last week, there were also eight or nine reports of trash cans that had seen the same wheel-busting issue.

“One can is not significant, but if you start adding that up if it’s happening all over the county every week, that’s an expense that we are having to bear, and I don’t think we should have to,” Ray added.

JP Rick Waller added that he had personally seen WCA destroy two trash containers’ wheels in recent months and that, when the county’s contract with WCA is up, “that issue needs to be negotiated.”

The county’s current five-year contract with WCA began in August 2018. The waste pickup company has been Columbia County’s solid waste provider since it won the services via low-bid in 2015. Prior to that, Get Rid of It handled local solid waste duties.

The issue of recycling pickup was also addressed by Foster. He told the Court that the lack of blue-container collection has been addressed multiple times with the company, but it has yet to get any better.

“We’ve had people go 17 weeks without it being picked up,” he said. “I’ve done what I can do talking to them, telling them this has got to improve -- it has yet to improve.”

The county judge stated that he will continue to work on the issue, but until the ramifications are financially great enough for WCA to change, the problem is likely to continue.

In other Quorum Court news: