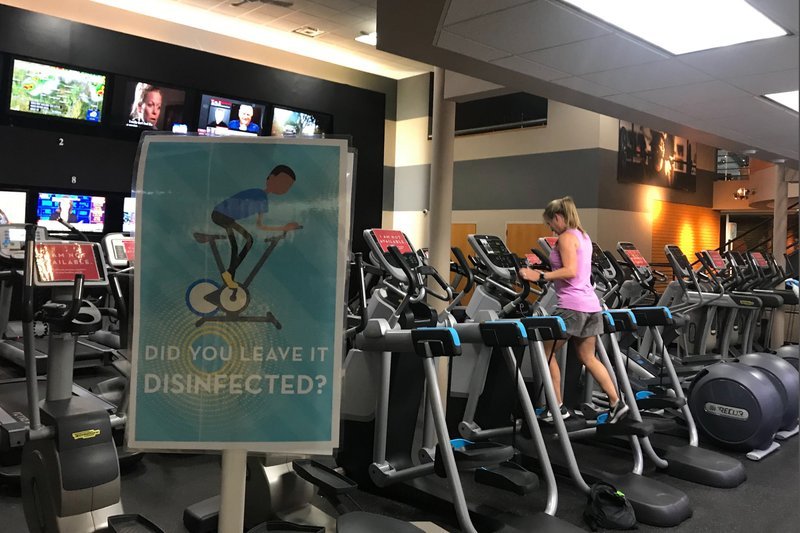 LITTLE ROCK, Ark. (AP) — Arkansas movie theaters, bowling alleys, arenas and other large venues will be allowed to reopen but with new limits to curb the spread of the coronavirus, Gov. Asa Hutchinson said Monday.

Hutchinson continued rolling back the state's restrictions on businesses as gyms began to reopen with similar social distancing rules. The Republican governor also issued recommendations to churches and other places of worship, which had not been closed in the state, on how to safely resume in-person services.

Health officials said at least 3,458 people have tested positive for the coronavirus, an increase over the 3,431 reported Sunday. The number is likely higher because many people have not been tested and studies suggest people can be infected and not feel sick. The number of people who have died from the illness caused by the virus rose from 76 Sunday to 81.

Hutchinson said large outdoor venues will be allowed to reopen Monday, while indoor ones can open May 18.

The venues will face similar restrictions, including limiting audiences to 50 or fewer people and requiring at least 6 feet of distance except for family groups.

"We need to keep with social distancing and we need to follow these guidelines so that we can, after another period of time, go into a greater number of people and more flexibility," Hutchinson said.

The recommendations for churches include eliminating the use of items touched by multiple people such as offering plates, no classes for youth or childcare, and no physical contact.

Arkansas was among a handful of states that hadn't issued a stay-at-home order but it was under other restrictions that Hutchinson has eased in recent days. Gyms were allowed to reopen on Monday, and the state is allowing barbershops and hair salons to reopen Wednesday.

Health Secretary Dr. Nathaniel Smith said the state is working on separate rules for allowing the reopening of three casinos that have been closed because of the virus.

NO IMMEDIATE DECISION IN INMATES' CASE

A federal judge declined to rule immediately Monday in a lawsuit filed by inmates accusing the state of not doing enough to prevent the virus spreading in its prisons.

U.S. District Judge Kristine Baker rejected the inmates' request to immediately order the state to take additional steps to curb the virus. Baker's ruling still keeps the inmates lawsuit alive and she planned a hearing Thursday on their complaint.

The lawsuit was filed after an outbreak of coronavirus at the Cummins Unit, where officials say at least 873 inmates have tested positive for the virus. The Health Department said five inmates at the prison died over the weekend from the illness caused by the virus.

For most people, the coronavirus causes mild or moderate symptoms, such as fever and cough that clear up in two to three weeks. For some, especially older adults and people with existing health problems, it can cause more severe illness, including pneumonia.

The state announced it will resume accepting applications for a grant program intended to help businesses comply with new coronavirus safety rules.

Legislative leaders over the weekend approved setting aside another $40 million in federal coronavirus relief money for the program, which will help businesses purchase disinfectant, protective gear and other needs.

The state stopped taking applications for the grants an hour into its launch last week after more than $38 million worth of requests came in, surpassing the $15 million initially proposed for the program.

The Economic Development Commission said it would resume taking applications for the program on Tuesday and Wednesday.