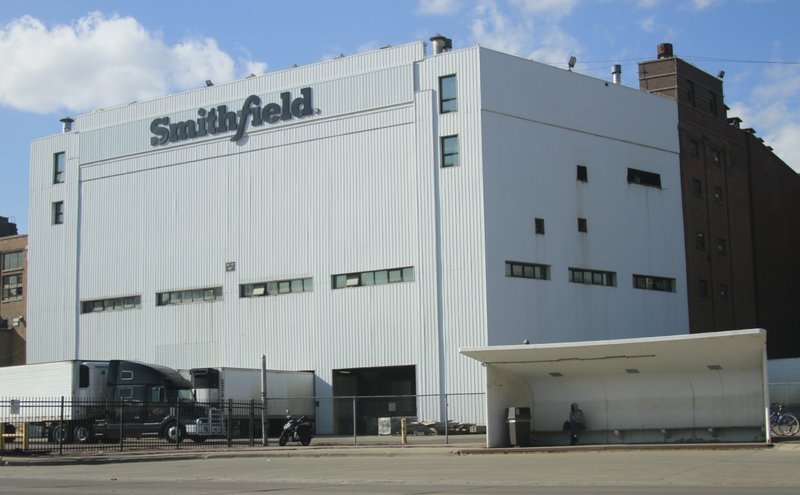 This April 8, 2020 file photo, shows the Smithfield pork processing plant in Sioux Falls, S.D. The union representing employees at the South Dakota pork processing plant says it will partially reopen on Monday, May 4, 2020, after shuttering more than two weeks ago because of a coronavirus outbreak that infected hundreds of employees. (AP Photo/Stephen Groves File)

SIOUX FALLS, S.D. (AP) — A South Dakota pork processing plant will partially reopen Monday after shuttering for more than two weeks because of a coronavirus outbreak that infected hundreds of employees, a union that represents plant workers said Friday.

Smithfield Foods asked about 250 employees to report to the plant on Monday to staff two departments — ground seasoned pork and night cleanup, according to the United Food and Commercial Workers union local. The union said it was informed Thursday about the partial reopening.

The Virginia-based company asked that employees who are sick or who might be more susceptible to severe illness and death from the virus — those over age 60 or who have existing health problems — to stay home, according to the union. For most people, the new coronavirus causes mild or moderate symptoms, such as fever and cough that clear up in two to three weeks.

Smithfield Foods did not immediately return a request for comment.

More than 800 employees of the Sioux Falls plant have tested positive for the coronavirus and two have died. The plant employs about 3,700 people and produces roughly 5% of the nation’s pork supply. The number of COVID-19 infections is likely higher because only people with symptoms have been tested and studies suggest people can be infected without feeling sick

The South Dakota plant is just one of many around the nation that have temporarily closed due to outbreaks. It also isn’t the only one to announce plans to resume operations since President Donald Trump this week issued an executive order that plants must stay open.

Arkansas-based Tyson Foods said Friday that its Logansport, Indiana, pork processing plant also will reopen Monday. It’s been closed since last Saturday. All employees received testing, the Indianapolis Star reported, but Tyson did not disclose how many tested positive.

“We toured the plant and feel the additional measures implemented will allow employees to work safely, while continuing to follow (Centers for Disease Control and Prevention) guidelines and recommendations,” Dori Ditty, the health officer for the county where the plant is located, said in a statement.

More than 4,900 workers at meat and poultry processing facilities have been diagnosed with the coronavirus, including 20 who died, according to a report released Friday by the CDC. The illnesses occurred among 130,000 workers at 115 facilities in 19 states, according to the CDC. Some other states didn’t provide data, so the actual count is believed to be higher.

The researchers said plant workers may be at risk for a number of reasons, including difficulties with physical distancing and hygiene and crowded living and transportation conditions. They suggested that disinfection be enhanced and that workers get regular screening for the virus, more space from co-workers and training materials in their native languages.

The United Food and Commercial Workers union, which represents roughly 80% of beef and pork workers and 33% of poultry workers nationwide, has appealed to governors for help enforcing worker safety rules. They also want to slow down meat processing, including getting rid of waivers that allow some plants to operate at faster speeds.