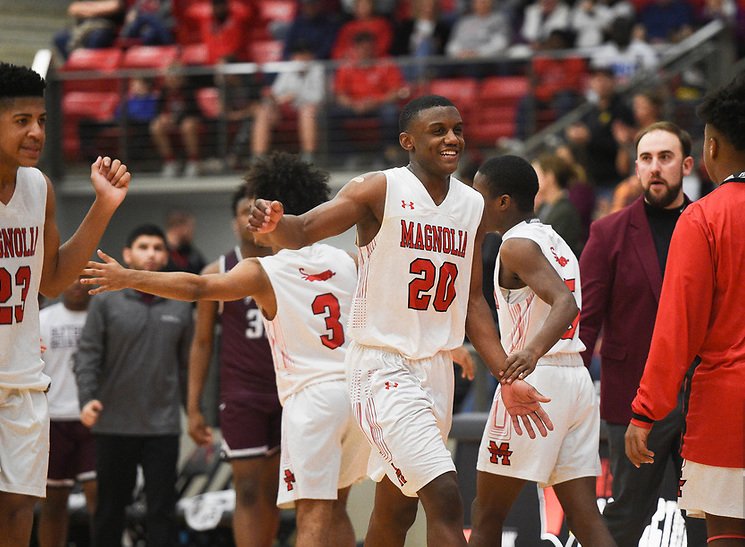 Magnolia guard Derrian Ford (20) reacts, Friday, March 6, 2020 during a basketball game at Cardinal Arena at Farmington High School in Farmington. Ford also lead the team on Saturday with 36 points in a 2 OT win over Brookland to advance to the Class 4A State Boys final for a second straight year. (NWA Democrat-Gazette/Charlie Kaijo)

FARMINGTON – Magnolia and Little Rock Mills will play again for the Class 4A State Championship after the Panthers survived a double overtime 63-56 win against Brookland and Mills knocked off EStem 75-64 Saturday in the semifinals of the Class 4A boys state tournament at Cardinal Arena.

It’ll be the second consecutive appearance for Mills, which lost 78-76 to Magnolia in last year’s title game where the Panthers claimed their first championship in 20 years.

Derrian Ford scored 36 points and the Panthers avoided an upset last Saturday night to advance to the state title game after the double-overtime thriller.According to Lindsey, Brookland is a type of team that doesn’t mind winning 20-19. He noted they were able to get the Panthers out of their rhythm, which is to get up and down the court.

“Brookland was well-coached and had so many shooters out there. That’s what made it tough,” said Magnolia head coach Ben Lindsey. “We you get up on them, they play keep away until someone is open for a shot.”

The coach said he knew it would be tough on his Panthers if Brookland had the lead.

“They had it most of the game and that’s what I was afraid of,” he said, adding his Panthers didn’t come out and get a good start.

Ford had 28 points in the second half and Lindsey said the sophomore is something special.

“Athletes like that don’t come along very often. We have good players on this team, but he’s got to be one of the best to come through Magnolia. Go look at that wall at Panther Arena and you will see some good ones,” explained the coach.

Lindsey also said Magnolia fans need to enjoy Ford and the other young talented Panthers while they are around.

“They are also super, super kids that we shouldn’t take for granted because they won’t be here for ever,” he added.

Brookland (20-14) led for most of the game, grabbing a 5-0 lead and holding the advantage until late in the fourth quarter.

Another Magnolia sophomore, Adrien Walker, who did not enter the game until late in the fourth quarter, got a steal and layup to draw a foul with 18 seconds left. His free throw gave the Panthers the lead for the first time at 46-45.

“No matter what level of basketball you play, a team needs a little luck or something to go its way. We had some luck with us on our side,” stated Lindsey.

Brookland’s David York was fouled with 0.6 seconds left and hit the first free throw to tie the game, but missed the second, sending it into overtime tied 46-46.

Magnolia led 53-49 with under a minute left in the first overtime when Brookland’s Drew Thompson banked in a three-pointer from the right side and drew a foul on the shot with 27 seconds left. His free throw tied the game at 53-53 with the four-point play.

“That was an unbelievable shot and foul on the play. I will leave it there. Again, Brookland’s plan was to pass as many times as they could and then find a shot. Everyone they put on the floor could shoot the ball,” he said.

In the second overtime, Ford took the game over. The sophomore hit back-to-back driving layups for a 59-54 Magnolia lead, then his two free throws with 26 seconds left clinched the win.

Throughout the course of the game during timeouts, Lindsey said he kept reminding his Panthers of who they were and why they were where they were.

“I told them to keep pressuring them and rotating out of our different traps. But the main thing was reminding them they had been in this position before, including last year’s championship game.

Looking ahead to the rematch with Mills, Lindsey said the Comets are super, super athletic and very deep.

“They are loaded, but we are going to give it our best shot. We plan to go nose-to-nose with them, and then see what happens,” he added.

Jakari Livingston’s final slam dunk told fans all they needed to know about what Little Rock Mills has accomplished this season.

Livingston scored 24 points and had three dunks in the second half to stop a comeback attempt by eStem, which tied the game 37-37 in the third quarter. Mills pulled away again and set off a celebration by its fans, players and cheerleaders after Livingston added another dunk for the final points of the game.

“Livingston is tough, and he had some really good spurts for us,” Mills Coach Raymond Cooper said about his junior center. “He guards, he rebounds and, as you can see, he’s pretty explosive, too, with the basketball.”

Returning to Hot Springs was a season-long goal for Mills, which lost to Magnolia in the title game last year. Mills lost its first game this season to West Memphis, but the Comets steadily improved and will take a 15-game winning streak into the championship game.

Javion Guy-King added 19 points for Mills despite being saddled with four fouls. His production countered brothers JK Sanders and Jacob Sanders, who combined for 31 points for eStem.

EStem (25-14) won two of three games in the state tournament after entering as a No. 4 seed. The Mets eliminated No. 1 seed Ozark 65-48 on Thursday after beating Camden Fairview 47-42 on Wednesday. But eStem couldn’t contain Livingston and Guy-King, especially in the third quarter when Mills built a nine-point lead.

“[Guy-King] had four fouls there, and I was waiting for the right time to put him back in,” Cooper said. “He’s such a matchup problem because he can handle the basketball and rebound. We got him back in toward the end of the game, and I was just praying he didn’t pick up that fifth foul.”

WHERE TO WATCH, TICKETS TO FRIDAY'S GAME

The game will be broadcast on television on Arkansas PBS (formerly AETN).

The game will be broadcast on local radio on KVMZ 99.1.

According to Magnolia Schools, there are a few different options for purchasing tickets for the state finals:

1) Pre-sale tickets (for 4A session only) will be available in the Athletic Director’s office in the Annex Building starting today at 10:00. The school will receive a percentage of the proceeds.

2) Single session and day passes will be available at the gate. $8 for all for session or $12 for day pass.

3) Single session and day passes are available online through the link below. Magnolia will play during session 4 on Friday. $8 for session or $12 for day pass.agnolia had a chance to win it at the end of the first overtime, but Colby Garland’s layup at the buzzer rimmed out.