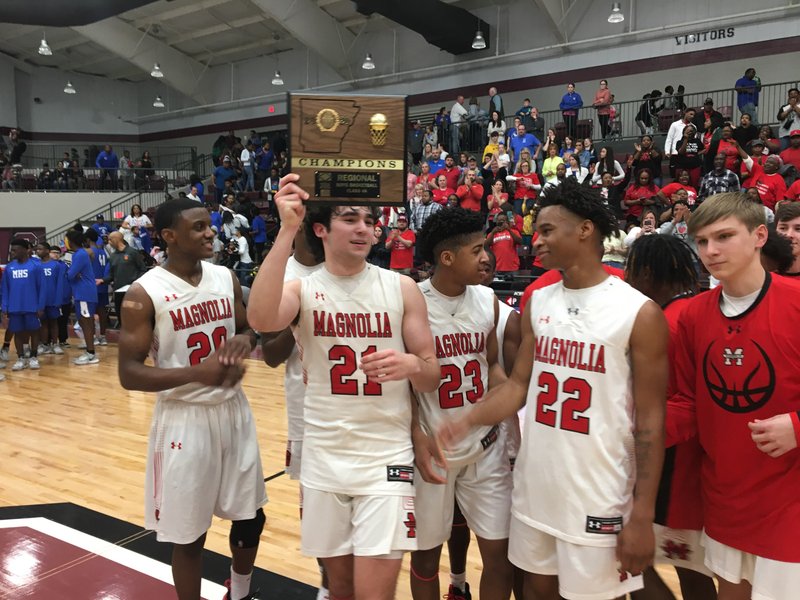 Magnolia senior Kyle Carver holds up the Class 4A South Region Championship plaque after the unbeaten Panthers defeated Monticello 59-48 in the finals at Crossett. At Farmington this week, the Panthers (25-0) received a first-round bye and will play at 5:30 p.m. Friday against either Blytheville or Dardanelle. A victory would put the defending Class 4A State Champions in Saturday night’s semifinal round at 7:30 p.m. The state finals will be at 7:45 p.m. Friday, March 13, in Hot Springs. - Photo by Chris Gilliam

Magnolia claimed its first Class 4A Region Championship last weekend and is now set to defend a state title from a year ago.

First-year head coach Ben Lindsey said he’s was proud of his guys on the way they battled and played in the regional tournament.

“It’s time to get the little things corrected and prepare for that next phase. We will review stuff on both opponents and try to fine what we do,” said Lindsey.

At the Class 4A State Basketball Tournament, which starts today at Farmington High School near Fayetteville, the Panthers will play the winner between Blytheville and Dardanelle.

Both teams are 25-6 on the season. On their way to the state title a year ago, the Panthers slipped past Blytheville 63-61.

This season, two of the Chickasaws’ losses have been by two points to overall No. 1 North Little Rock and by four to Little Rock Mills, last season’s state runner-up.

“Right now, it’s all about confidence and I think we are playing with a lot of it right now. We are going in the right direction,” said Lindsey.

In the regional tournament, the Panthers blew past Bauxite (70-36) and Nashville (70-46) in the first two games, but had their toughest battle during a 59-48 win over Monticello. It was their third victory over the Billies, who gave them two of their five losses last season.

“That was a pretty exciting game. Monticello is really, really good,” Lindsey said after the win.

The Billies fought back from a 15-point third-quarter deficit and closed the gap to six midway through the fourth quarter.

Key buckets by Derrian Ford and Kyle Carver helped the Panthers claimed the 11-point victory and the championship.

“The scary thing about them is they have some good shooters who can heat up in a moment. They are quick, elevate well and tough to guard,” said the coach. “Sometimes when they start hitting shots like that, there’s not much you can do about it,” he said.

Against Monticello, Garland led with 23 points and Ford finished with 12. Kyle Carver added 11 and Braelyn Beasley had 10.

In second round action against Nashville, Ford led with 23, Beasley had 18, Carver 10 and Garland nine. Against Bauxite, Ford was the front-runner again with 24 points and Garland added 22.

Magnolia faced early foul trouble in two region games, but Lindsey said he has plenty of confidence in players like Drevonte Dismuke or Adrien Walker coming off the bench.

“Drevonte, as small as he is, has a knack for the ball on the boards. He comes out of nowhere and gets the rebound,” he said of his 5-6 junior guard.

Garland and Beasley faced foul trouble in the tournament, and Lindsey said, “It’s not any fun when you don’t have all your guys out there.”