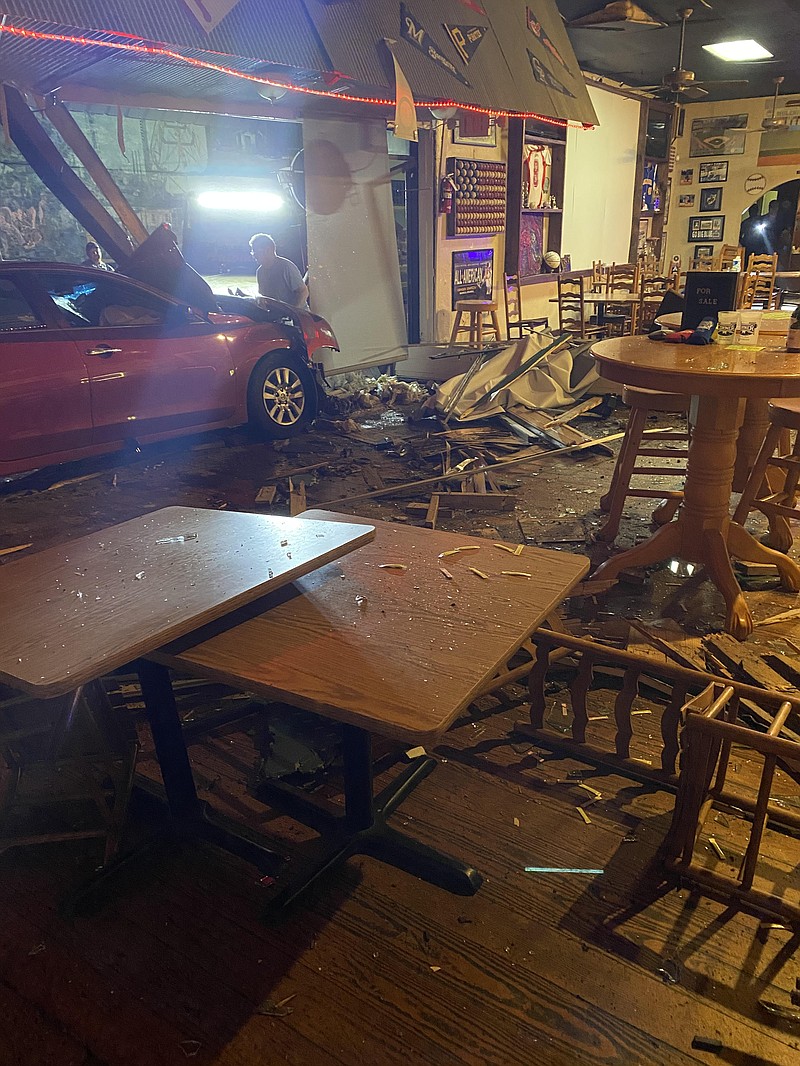 A maroon Nissan Altima crashed through the north wall of The Corner Clubhouse around 12:40 a.m. Sunday morning. - Photo by Alexandra Langston

A maroon Nissan Altima crashed through The Corner Clubhouse while attempting to evade police, according to a press release from the Magnolia Police Department Criminal Investigation Division.

On Sunday morning, Magnolia Police Officers attempted a traffic stop on a maroon colored Nissan Altima around 12:40 a.m. near the intersection of Jefferson Davis and North Vine streets.

The Altima then traveled southbound on North Washington Street before entering the one-way portion of Washington near the Square on the wrong side of the road. The suspects attempted to make a left-hand turn but instead crashed the car through the north wall of The Corner Clubhouse, the press release says.

The vehicle slammed into the brick and glass wall of the restaurant before coming to a stop with half of the car inside the business. The two men inside the vehicle fled south toward Calhoun Street as the pursuing officer tried to find out if anyone was still inside the vehicle, according to the release. The officers searched the area but were unable to locate the driver.

“This is like the icing on the cake for 2020,” said Corner Clubhouse owner Alexandra Langston. On Tuesday, she sat at the bar with dirt on her hands, still busy cleaning up from the wreck that destroyed a quarter of the front entrance.

Langston explained that the wreck had taken out much more than just the glass and brick at the north wall of the restaurant.

“Besides the structure damage, we lost tables, chairs and fixtures on that side. A lot of debris hit TVs and things behind the bar. It also took out our point of sale system.”

Langston stated that the vehicle also damaged a main support beam, with the weight of the wall creating a concern for the structural integrity of the building. She also said that she has received help from many people in the community during this tough time.

“The town has been great to us. Yesterday, every official you can imagine came by to offer their support,” said Langston, who mentioned that many members from her church came by to help, with one welding a temporary support beam to replace the one that was damaged in the crash. She also stated that S&S Hardware offered to open up that Sunday for Langston to get supplies to open.

Despite the issues, Langston looked towards the brighter side of things.

The suspects in this case are still at large with the Magnolia Police Department Criminal Investigation Division urging residents to contact them at (870) 234-3765 if they know any information.