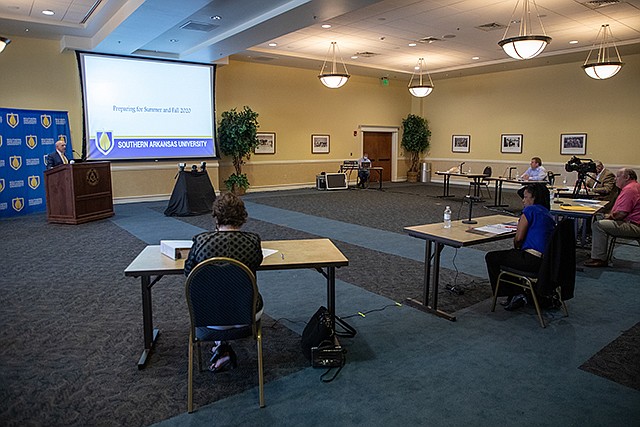 The Southern Arkansas University Board of Trustees met last week in the Reynolds Center Grand Hall on the SAU campus. The Board approved the 2020-2021 University system budget as presented.

SAU held the in-state undergraduate tuition constant showing no increase per credit hour, and mandatory student fees were unchanged but reflected a temporary transfer of $1 from the student activity enrichment fee to the health services fee. Tuition and fees for off-campus undergraduate students were held flat. The food service contract rose by 3.1percent, precipitating a slight increase to student meal plans.

The University budgeted expenditures $6,762,722 lower than the previous fiscal year. Due to a forecasted decline in enrollment, state funding reductions, and contractual increases, the University took many actions to balance the budget. Unfilled positions were frozen or restructured to help offset the anticipated decline in revenue. Additionally, budgeted expenditures for graduate assistants, student and contract labor were significantly reduced. Other savings were captured by reductions to non-fixed or non-contractual supply and service accounts and to travel budgets.

The University prioritized essential operations and employee retention throughout the budget process. While currently there are no workforce reductions due to decreased revenues, changes were implemented to employee benefits to balance the budget. Employees will see an increase in health insurance premium contribution rates, and SAU will reduce the employer retirement match to state levels. The freeze on unfilled positions comes at a cost to existing employees to create the robust experience students are accustomed to having at SAU but with fewer resources, a situation the institution hopes to improve as the economy improves.

During his opening comments, system president Dr. Trey Berry said SAU is working tirelessly to ensure that students return to campus safely and to the quality they expect. He expressed his gratitude to faculty and staff for their efforts to successfully reopen the campus. “We are going to get through this together, and we’ll be stronger for it.”

SAU is reopening in phases, with the first having begun on June 15 and the second to begin July 6. Two committees were established to make sure the reopening adheres to all safety guidelines. Berry praised the committees for their hard work, noting the risk-management team has met several times to discuss the over-arching situation. “They have done a wonderful job,” he said.

A re-opening committee consisting of faculty and staff and led by Dr. David Lanoue and Dr. Donna Allen has met frequently to establish policies and procedures for the fall. “They have spent hours looking at state and federal guidelines to get us ready,” Berry said, thanking all committee members.

He informed the Board that the fall semester will begin a week earlier than normal, on August 11, and end before Thanksgiving, to keep students as safe as possible. Spring and Summer Commencement will be held on Aug. 7-8 in Wilkins Stadium. “We look forward to celebrating the achievements of our graduates,” said Berry. Social distancing will be observed during the ceremonies.

Berry said SAU has purchased hundreds of personal protection devices for the fall including masks, hand sanitizers, testing machines and plexi-glass shields for use in high-traffic areas. People will also be required to wear masks inside buildings.

Regarding the upcoming year, Berry thanked the budget committee for its work over the past few months. “It has been a very unusual budget process. The committee has had many frank discussions,” Berry said. “We have a tremendous faculty and staff, and we have all learned a lot about our priorities.”

He informed trustees that Josh Kee, Vice President for Advancement, and his team have established the Mulerider Strong Fund, which will assist SAU in times of emergency. “We have been amazed at what our alumni and friends have done already,” Berry said, promising additional information on the fund in the near future.

Berry pointed to Mulerider heroes who have made a positive difference during the pandemic. The College of Science and Engineering has used its 3D printers to create shields used at local health care facilities, including Magnolia Regional Medical Center. He thanked the College for providing this service to health workers.

Berry recognized 2005 SAU alum Grant Smith, who has led the State of Arkansas’ efforts to make it possible for all state employees to work remotely. This included getting laptops to all state workers so that they could work from home. Berry also praised Zachary Shealy, a 2018 SAU nursing program graduate, who quit his job in Tyler, Texas, to work on the pandemic’s front lines in New York City. “He saw the huge problems they were having and ran to the fire,” Berry said. “We have Muleriders doing this all over the country.”

Another Mulerider hero who Berry singled out for praise is Colorado resident and 1942 Southern State alum Ray Burns, who has begun a campaign to raise money for the COVID-19 crisis by walking 100 miles by his 100th birthday in August. “He is a veteran of World War II, the Korean War and the Vietnam War,” said Berry, lauding Burns’ effort.

Berry also noted that SAU has received a grant totaling almost $700,000 from the Arkansas Natural and Cultural Resources Council (ANCRC) for the restoration of historic Bussey Hall. Work to restore the residence hall to its proper glory is expected to begin in July.

In his comments, Dr. Jason Morrison, chancellor of SAU Tech, said the college is working to ensure a safe reopening in the fall. He also recognized the retirement of David McCleane, vice chancellor of student services, who served SAU Tech for 15 years. McCleane thanked Morrison and the Board for the opportunity to serve students.

In other agenda items, the Board approved SAU’s request to add six new academic programs, supporting the institution’s mission to educate students for productive employment in a global environment. The programs approved included a BSE/MBA and BS Engineering Physics program, a 4+1 LBPH/MPA program, an Educational Examiner Licensure program, and two Graduate Certificates in Data Analytics and Business Leadership.

Under the SAU Appropriation Act of 2020-2021, new provisional positions were granted to sustain the new academic programs, including additional staff, faculty and classified pool positions based on the needs of student service. The motion to increase the provisional request for SAU was approved up to the statutory limit of 70. SAU-Tech was approved a request to continue the 15 current provisional positions they currently have and to fill any remaining positions needed by the institution. The Board’s approval of these positions will go to the Arkansas Department of Higher Education for certification to the Legislative Council.

The Board approved and adopted athletic budgets as presented, including the renewal of a $19 athletic fee for SAU. The SAU Tech budget included a $9 per credit hour fee, with eighty-eight percent of the fee allocated for athletics and twelve percent for student activities.

In other business, a change of accounting policy was approved, shifting from a straight-line method of depreciation to the State’s uniform depreciation policy. This change is expected to reduce the University’s annual depreciation expenses.

The Board authorized the University to refinance 2013B and 2015 Student Fee Secured Capital Improvement Bonds, at interest rates 2.0-2.5% below current rates, saving the institution almost $700,000 over the life of the bonds. Terms of the refinanced bond issue will not exceed the remaining 25-year maturity date of the original issue.

After the Board adjourned from Executive Session all personnel changes were approved and the meeting adjourned.