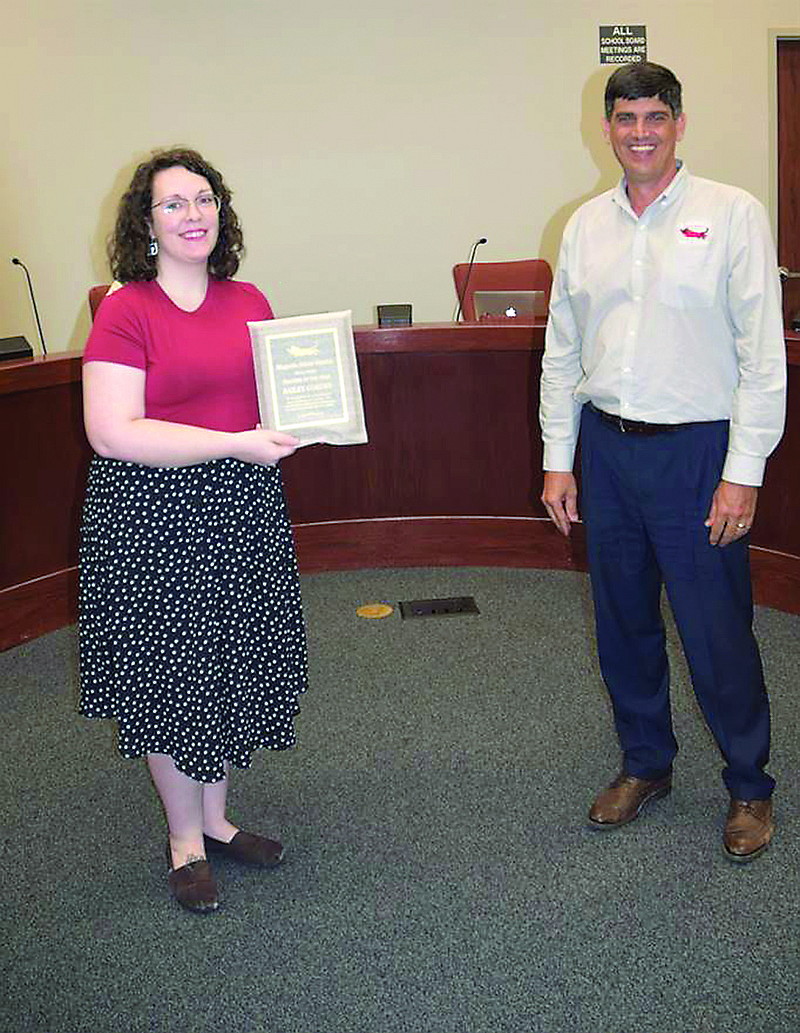 Bailey Coburn was recently recognized as the Magnolia School District’s Teacher of the Year.

The news came earlier this week at the Magnolia School Board meeting. This award was presented to Coburn, the East Side Elementary School art teacher. Superintendent John Ward read Coburn’s biography and then presented her with the plaque of recognition.

Coburn is a graduate of Ashdown High School and Henderson State University. She teaches over 600 students each week, leads 5 different music programs each year, including East Side Elementary’s first Veterans Day program, and began a weekly yoga program for students with conduct and sensory impediments.

She will represent the Magnolia School District in the Arkansas Teacher of the Year competition.

Following this are classroom observations and interviews at the finalists’ schools, with the 2021 Arkansas Teacher of the Year announcement set some time prior to December 20.

The board also discussed district property that is to be removed from the fixed assets list, which includes 12 buses, one pick-up truck and one car that were auctioned off the week prior. The Board also discussed district finances, with Ward noting that last year when the board made the decision to do breakfast in the classroom, there was no way to know what impact it would have had on their food services fund.

Ward then spoke to the board about the resolution issued by the School Board Association which calls for the suspension of district policy to align with emergency COVID-19 legislation and statutory rule waivers which will end when the public health emergency ends.

Ward recommended that the board approve this resolution, and the board voted unanimously in approval.

The Board also discussed changes to the student handbook. The changes to the handbook were minimal, with a small change to the phone and communications devices section that detailed that state-approved devices would be allowed during assessments, as opposed to the previous year detailing that no devices could be present during an assessment.

The last change was on assessment remediation, which clarifies the requirements for students in the Special Education program to graduate. The changes were all approved by the board.

The board then approved Ward as Board Representative to South Central Service Cooperative, approved scheduling the July board meeting, and approved the temporary employees for 2019-2020.

The board then discussed the Division of Elementary and Secondary Education LEA Assurance and Application for Arkansas Ready for Learning Model and Appropriate Waiver for School Year. Ward clarified that this was an assurance that the school district is committed to providing a viable curriculum regardless of whether the school district is conducting on-site or off-site learning.

“While we do plan to attend school on a regular schedule, we are prepared to provide that same level of instruction off-site,” said Ward, who stated that the school will have to send a district support plan to the Division of Elementary and Secondary Education to approve. The reentry plan is currently being developed by the reentry task force, which Ward expects to be completed in the next two to three weeks. The assurance to provide a viable curriculum on- or off-campus was approved by the board.

During the Superintendent’s Report, Ward spoke about the Arkansas Department of Education’s Ready for Learning information, which is available on the ADE website. This resource is available for anyone to review and it details the efforts that districts will need to make to support schools, teachers, parents and students to innovate and adapt to new learning opportunities.

Ward also discussed the remodeling efforts in the school district, noting the junior high school will receive access to the freshman academy building once the new flooring is installed in five classrooms. Bricks are being placed around the auditorium with the top half of the auditorium matching the arena. Ward said he will receive a schedule for the auditorium work’s completion at a construction meeting on June 16.