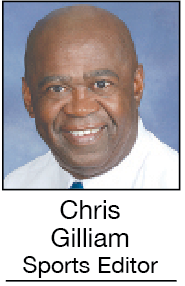 MAGNOLIA — EDITOR’S NOTE: I thought it would be interesting to reflect on somo old columns. This one was published June 19, 2005 in the South Arkansas Sunday News.

There are some phrases or sayings that stick with you once you hear them.

Coaches occasionally use “one liners” we pick up on and carry with us the rest of our lives.

A Southern Arkansas University junior from Camden organized the event and his theme (Now is the time) was exactly what the nearly 150 teen-agers needed to hear.

I was impressed with how one speaker explained gangs and clicks, while another talked about how wrong decisions are made after receiving the wrong information.

This was only the second annual summit and 20-year-old executive director Matthew Hamilton was overwhelmed to see attendance more than double in a year’s time.

Gangs, politics, athletics, responsibility, racism and college were just some the topics covered during the weekend event.

Every speaker encouraged teens by saying “Now is the time.”

From picking the right friends to making right decisions, youths were encouraged to be smart and informed.

It was also an event run primarily by young people.

It had all the excitement of a sporting event and necessary information needed in life.

Former Rep. Robert White and current Rep. William Hardy were also amazed at the turnout, as well as being impressed by how a 20-year-old college student was able to work nearly non-stop for a year to pull it together.

Matthew stopped by to see me Thursday and he’s already excited about next year’s event.

Like a head coach, he’s planning his strategy to make the 2006 event more successful.

He’s already reeled me in and don’t be surprised if he comes knocking at your door.

To use his theme once again, “Now is the time” to start preparing for everything, whether it’s life or athletics.

Athletes shouldn’t wait until mid-July to start getting in shape for fall football practice in August.