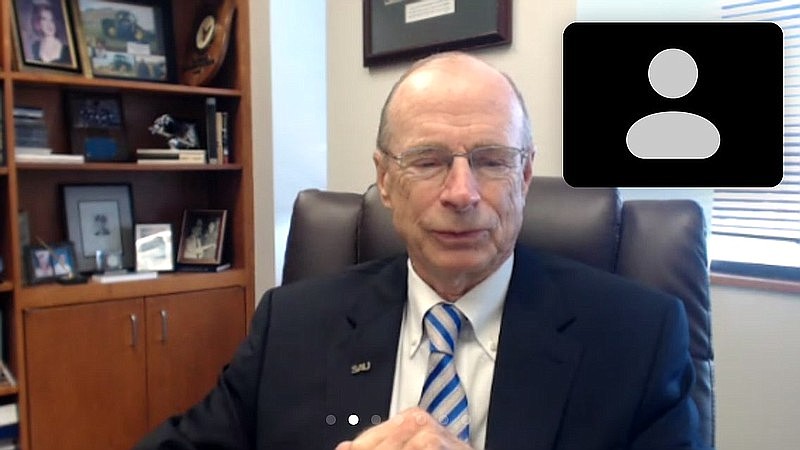 Dr. David F. Rankin, President Emeritus of Southern Arkansas University, long-time economics and finance professor and author, spoke Monday about the effects the ongoing COVID-19 pandemic has had on the economy during a meeting of the El Dorado Rotary Club.

Dr. David Rankin, President Emeritus of South Arkansas University and a long-time professor of economics and finance, spoke Monday about the effects the ongoing COVID-19 pandemic has had on the United States economy during a meeting of the El Dorado Rotary Club.

“It’s been called the dismal science; I call it the exciting science, because I think it’s an opportunity to meet some of the challenges we have coming up and not throw the baby out with the bathwater,” Rankin said at the start of his presentation.

Rankin compared 2020 to the opening line of Charles Dickens’ “A Tale of Two Cities”: “It was the best of times, it was the worst of times.”

In January, he said, the economy looked “wonderful”; unemployment was down, inflation was down and the stock market was performing well. However, as the pandemic spread throughout the U.S., the economy “dropped out.”

“Unemployment was 3.5%. You can’t ask for better than that,” he said. “(The pandemic) has created an economic dislocation like nothing we have ever seen.”

He said that while the U.S. has faced notable recessions in the past — the 2008 financial crisis, the 2000 dot-com bubble, the early 1980’s recession and, of course, the Great Depression — the current recession differs in significant ways.

“All of those were kind of natural, normal type recessions; this one was not,” he said. “It happened on the basis of the virus.”

As the novel coronavirus began to spread throughout the country, state governments responded by shutting down businesses and asking workers to stay home to stop the spread of the virus. Rankin said he supported the federal government’s response in passage of the CARES (Coronavirus Aid, Relief and Economic Security) Act, which, he said, helped to inject some activity back into the economy.

“(During the Great Depression, the Federal Reserve) stood by and watched it happen,” Rankin said, noting that a third of banks in the U.S. went under, causing those with money — both investments and savings — to lose everything due to the lack of deposit insurance at that time. “We would’ve gone into a depression otherwise. … The government had to fix it. They saw what was happening in the economy, and it’s kept us from moving in a downward style.”

The stimulus will create more debt, though, he said. The deficit was at about $1 trillion at the start of the year; Rankin predicted that with an expected second round of stimulus forthcoming, the country could end the year with an additional $4 to $6 trillion of debt.

“We basically are monetizing our debt. We’re basically the borrower and the lender,” he said. “The Treasury issues the bonds and the Federal Reserve buys the bonds.”

He noted that he does support additional “helicopter money,” direct payments to U.S. residents, in order to keep the economy afloat.

“This was not trickle-down. This was a direct injection into your pocketbooks,” he said. “In the Depression, it would’ve been better to dump money out of airplanes over cities than what they did.”

Rankin has sat on the Governor’s Council of Economic Advisers since Mike Huckabee’s administration, and he complimented Gov. Asa Hutchinson’s response to the virus. While some states enforced complete shutdowns and shelter-in-place orders, Hutchinson did not.

“If we don’t have people out making things, then there won’t be anything … We can’t just shut the economy down; we have to keep the biggest part of it going,” he said. “You cannot shut an economy down and expect things to run and work and the grocery shelves to be full.”

While acknowledging that there could be more people who have contracted COVID-19 than official data suggests, Rankin said he believes that since only about 1% of Arkansans have tested positive for the virus, it’s time to get back to work.

“We cannot stand the economic damage,” he said. “We have to learn how to balance this and protect people, particularly the most vulnerable, but we’ve got to get back to work.”

Rankin said some businesses and industries have been hit particularly hard by the pandemic, such as airlines, businesses across the hospitality industry and even clothing retailers; but others, particularly those in the technology sector, like Zoom — which the Rotary meeting was held over —, Apple, Google and Netflix have seen their profits increase.

“I think Walmart … I think they’re going to be really, really successful,” he said.

He also noted that rural areas could potentially experience a “Renaissance” now that working from home is an option for a broader range of professionals. He said he thinks going forward, it will be important for those entering the workforce to have strong technical skills and be knowledgeable about technology.

“Instead of focusing on things that are not important, I’m talking about keeping up with the latest tech,” he said. “Those social skills and workforce skills are also just as important as tech.”

Rankin is also the author of “What Every American Needs to Know About Economics,” which is available for purchase on his website, davidfrankin.com. The El Dorado Rotary Club meets every other Monday at noon.