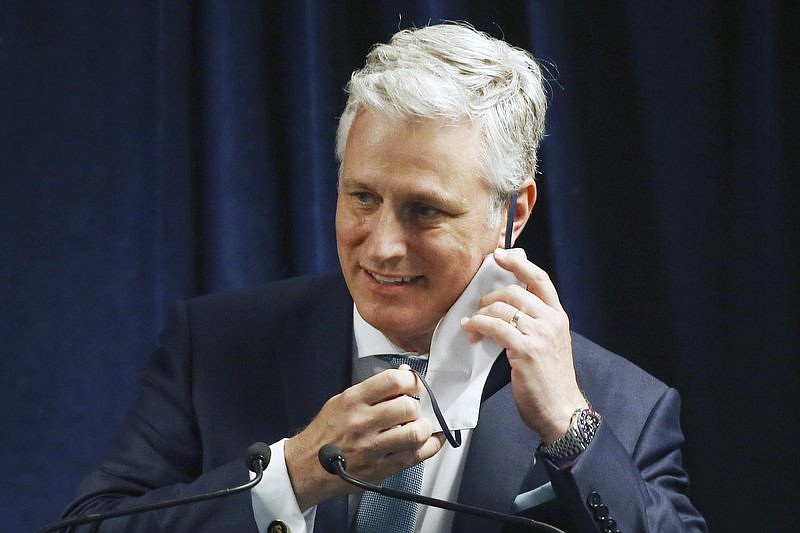 n this file photo, Robert O’Brien, assistant to the president for national security affairs, removes a face covering prior to speaking during a news conference in Phoenix. O’Brien has tested positive for the coronavirus. He’s the highest-ranking White House official to test positive so far. - Photo by (AP Photo/Ross D. Franklin)

That’s according to two people familiar with the situation who spoke on condition of anonymity because they weren’t authorized to discuss it by name. The White House confirmed that O’Brien has mild symptoms and “has been self-isolating and working from a secure location off site.”

Officials did not respond to questions about the last time the president and O’Brien had contact, but the White House insisted that, “There is no risk of exposure to the President or the Vice President” and that the “work of the National Security Council continues uninterrupted.”

Trump told reporters as he left the White House on Monday that he wasn’t sure when his national security adviser had tested positive and hadn’t “seen him lately,” but would be giving O’Brien a call. White House economic adviser Larry Kudlow had said earlier that O’Brien’s daughter also has the virus, and that that is how officials think he was exposed.

O’Brien also recently returned from a trip to France, where he met with top European officials and was photographed standing close to others and not wearing a mask.

O’Brien is the highest-ranking White House official known to have contracted the virus and the first since May, when a personal valet to the president and the vice president’s press secretary tested positive for the virus that has now infected more than 4 million people nationwide. Numerous U.S. Secret Service agents and Trump campaign staffers have also tested positive, including national finance chair Kimberly Guilfoyle, who is the girlfriend of Trump’s oldest son, Donald Trump Jr.

Senior White House staff and anyone who comes into close contact with the president and vice president are tested for the virus daily, but mask-wearing remains lax across the White House complex.

Trump, who has long dismissed the severity of the virus and claimed wrongly earlier this month that “99 percent” of cases are “totally harmless,” said in a recent interview on Fox News Channel that he had personally “lost five people, probably six, actually, as of this moment, I think, pretty soon” to the virus.

O’Brien had previously served as Trump’s top hostage negotiator and successfully worked for the release of several Americans, including pastor Andrew Brunson, who spent two years in a Turkish prison. Since taking on his new role, O’Brien has worked to establish an amiable relationship with the president, who has been drawn to O’Brien’s low-key California vibe and style.

The Republican lawyer, who also worked in the administrations of George W. Bush and Barack Obama, is generally seen as a jovial presence, frequently stopping by to chat with reporters traveling aboard Air Force One. He typically works from a corner office on the first floor of the White House, a few steps from the Oval Office.

The news about O’Brien’s positive test was first reported by Bloomberg News.