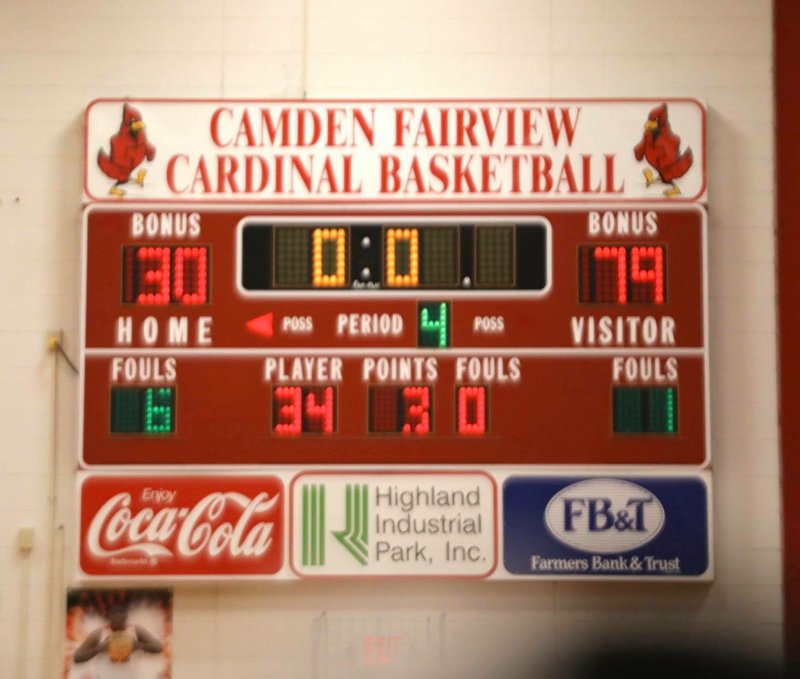 The final scoreboard reading after Magnolia versus Camden Tuesday night.

The top-ranked team in Class 4A is pounding opponents in the Region 8 Conference, with the latest victim falling by 49 points.

The Magnolia Panthers (13-0, 4-0) have evoked the Arkansas Activities Association’s “mercy rule” in each of its league games this season and many nonconference contests. They blew out Camden Fairview 79-30 Tuesday night, knocked off Crossett and Monticello by 32 points each, and won over Star City by 34 points. The mercy rule calls for a non-stopping game clock, usually in the fourth quarter, when one team goes ahead by 30 points or more.

The Panthers will be on the road again Friday when they travel to Hamburg to face the Lions (5-10, 0-4), who are winless in league play. Magnolia and Warren (10-4) are both 4-0 in conference, with the Lumberjacks playing at Monticello (14-5, 4-1) Friday night. Crossett and Star City have three losses in league play, while Camden Fairview and Hamburg are 0-4.

At Camden Fairview, the Panthers trailed 7-4 in the first two minutes, but went on a 12-2 run to gain control. Senior Braelyn Beasley, who finished with a game-high 19 points, had four consecutive buckets during the run as Magnolia led 14-9 after the first period. Colby Garland finished with 17 and Kyle Carver added 12. Eight other Panthers also contributed to the scoring.

Head coach Ben Lindsey said he’s learning more and more about his team with each game.

“Colby and Derrian Ford, though they are great players, are beginning to move more without the basketball. We are also pretty good at what I call hockey assists, which involves setting up people down the road,” said Lindsey. “In basketball, you only get an assist for the guy when it directly leads to a bucket. We are good at getting the ball off the rim and getting it to where it needs to be. It’s that first guy that makes the first pass and not that guy who makes one that led to the bucket.”

Magnolia, led by Beasley, Garland, Carver and Ford, used a 13-0 run at the start of the second quarter that put the game out of reach for the Cardinals. Camden Fairview managed to get its first bucket in the final two minutes, but the Panthers carried a 33-12 lead into the locker room at halftime.

With a continuous clock, reserves played the entire fourth quarter and Magnolia still managed to score 22 points during the eight-minute stretch.

At Hamburg Friday, Lindsey said he’s not sure what defense the Lions will throw at the Panthers.

“So far, we’ve seen just about everything. We have seen the 1-3-1, triangle-and-2, and what some people will call a tandem, where you guard two and leaving three in the middle. Our guys have handled everything so far, but it’s hard to prepare when you don’t know what you’re going to see every night,” said Lindsey. “Hopefully, this experience we’re getting will come in handy.”

Overall, Lindsey said he’s pleased with effort of his Panthers. He noted they are playing extremely hard and doesn’t matter to them who scores the most.

“I know everyone wants each of them to score 20 a game, but you tell it doesn’t matter to them when you watch them play,” stated the coach.