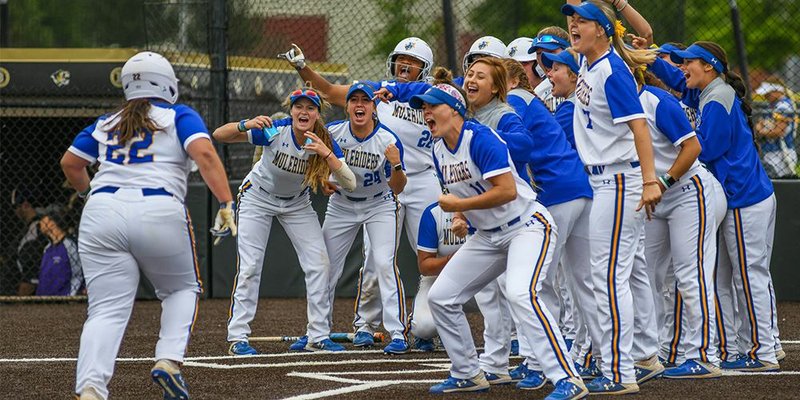 The 2020 Lady Muleriders softball team has been picked to finish first in the GAC. - Photo by Southern Arkansas University

Southern Arkansas softball has a lot of firepower returning for the 2020 season and that’s one reason GAC coaches picked them to repeat as conference champions.

The Lady Muleriders are the defending regular season champions and received 120 points and 10 of 12 first-place votes.

The season is set to begin in less than two weeks.

Arkansas Tech and Harding both tied for second in the poll with 105 points apiece, both receiving a first-place vote as well.

The Lady Muleriders are coming off a 46-13 season that included a trip to the Central Regional Tournament for the fourth year in a row under head coach Jason Anderson.

Wader who posted a 22-4 record and 1.44 ERA, while Taylor and Elisa combined for 23 victories. Favela added a team-leading .358 average plus 13 home runs. Chelsea Fagan also returns after she led the team with 19 home runs.

The Golden Suns repeated as the GAC Tournament champions and qualified for their fourth NCAA Regional in the last five seasons.

While they must replace their top three pitchers, the Golden Suns return All-American and GAC Freshman of the Year Tymber Riley plus 2019 GAC Championship MVP Ashton Sangster.

Riley hit .398 with 12 home runs while Sangster led the GAC with seven triples and ranked third with 50 runs scored.

Hipp won 17 games and her 2.53 ERA ranked fifth in the league. Feringa posted a .331 average and Fields ranked sixth with 47 RBI.

The year concludes in Bentonville with the Under Armour GAC Championships, set for April 30 through May 2 with the top eight teams competing in a single-elimination event.

At the Arkansas Tech Winter Invitational in Conroe, Texas, SAU’s back-to-back games will be against two of the last three national runner-ups in Texas A&M-Kingsville (2019) and Angelo State (2017).

In addition, the Lady Muleriders will also face St. Mary’s (TX) and Tarleton State opening weekend before heading to Commerce, Texas the next weekend to take part in the Texas A&M-Commerce Tournament, where they will face Rogers State, Commerce, Texas Women’s and UT-Tyler.

They wrap up their nonconference slate the following weekend in Bentonville as a part of the Alvy Early Memorial Classic, taking on Upper Iowa, Pittsburg State, Northwest Missouri and Maryville.

Under Anderson, the Muleriders are 16-4 against their 2020 non-conference opponents.

The Lady Muleriders open conference play the next weekend at home, hosting Harding in a four-game set.