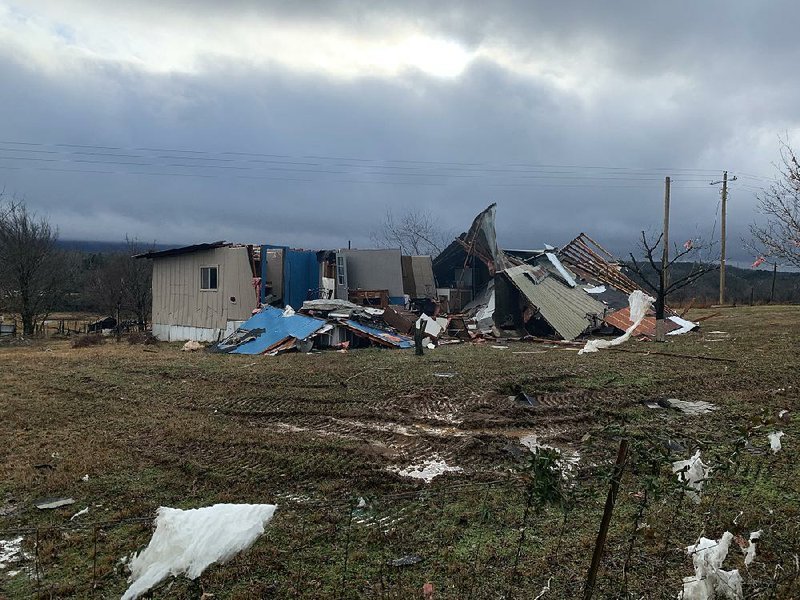 A home on Old Military Road in Midway sits in ruin Saturday after an EF-2 tornado struck in Logan County late Friday. - Photo by Arkansas Online

The National Weather Service has confirmed eight tornadoes touched down in Arkansas during powerful storms that moved through the state overnight Friday into Saturday morning.

No injuries or deaths have been reported.

Two of those tornadoes were rated EF2. One traveled 13.6 miles in Logan County and had peak wind speeds estimated by the weather service at between 111 mph and 135 mph.

Several barns, chicken houses and out buildings were destroyed, the weather service said. At least nine homes were damaged, including five that were destroyed, according to Logan County officials.

Another EF2 tornado started northeast of Hamburg in Ashley County and "tracked roughly 20 miles to just east of Montrose" in Chicot County, the weather service wrote in a damage survey report. Peak winds were estimated at 130 mph.

"Thousands of trees were uprooted and snapped along the path along with numerous power lines and poles downed," the agency wrote on that tornado, which occurred after 3 a.m. "Some of the heaviest damage was to a mobile home just off [Ashley County Road 129]. The home was thrown 15 to 20 feet and destroyed."

Six other tornadoes were rated EF1 in strength. One that occurred near Seaton in Lonoke County blew in a grain bin and tossed a shed, according to the report.

Another occurred near Jerome in Drew County, "mangling" a silo, according to the report.

In south Arkansas, Ashley County saw three separate tornadoes, according to the report.