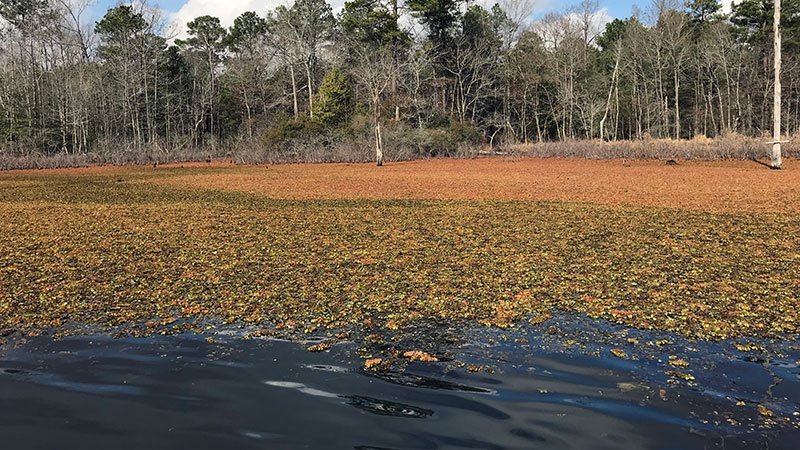 Giant Salvinia covers a patch of water at Lake Columbia.

With the recent discovery of the invasive plant species giant salvinia making its way into Lake Columbia, an emergency 3-foot drawdown is now underway after local and state authorities met Wednesday and decided on the move. The drop in lake level hopes to expose the plant along the bare banks of the Magnolia-area lake shores ahead of sub-freezing weather forecast Saturday night.

The meeting was called after the Arkansas Game and Fish Commission (AGFC) on Monday reported that giant salvinia had crept its way into coves at the lake. And since the waterbody is a drinking source for Magnolia and many Columbia County towns that Magnolia sells water to, no herbicides can be used in the elimination process while the plant is still in the water. Once the plant is exposed on the banks, though, plant-killing chemicals can then be used to eliminate the nuisance.

“Numerous members of the Arkansas Game and Fish Commission were present at Wednesday’s meeting who specialize in aquatic nuisance species, aquatic vegetation, fisheries management, and biology,” said Dan Gregory, Chairman of the Columbia County Rural Development Authority, the agency that manages the lake, in a Wednesday news release.

RDA board members as well as representatives of the city of Magnolia, the Arkansas Department of Health, the Department of Agriculture, and the State Plant Board were all present at Wednesday’s meeting, according to the release.

The emergency drop in water level is currently underway.

“The drawdown itself can have beneficial results as it will pull the giant salvinia away from other vegetation on the banks, better exposing it to cold air,” Gregory added. “The colder, the better.”

No one quite knows how the plant made its way into Lake Columbia, but the free-floating, rapidly-growing vegetation that is similar in appearance to duckweed, only much larger, is nothing to take lightly. The South America species has steadily made its way up from Louisiana and Texas lakes to southwest Arkansas and thrives on warm weather. It is described by AGFC as “harmful” and “invasive” because of its ability to quickly spread and virtually cover a lake, thus starving the water underneath of oxygen and light and choking out all other plants and animals if left unchecked.

The species was first discovered in the immediate Columbia County vicinity just over a year ago, when giant salvinia was first reported in December 2018 at Lafayette County’s Lake Erling, located roughly 30 miles southwest Lake Columbia. The RDA Board has been aware of the threat, and installed numerous warning signs and made social media posts steps that could be taken to potentially avoid the spreading of the species into Magnolia, but no major boating or fishing restrictions were applied at Lake Columbia.

And with the lake, which is owned by Columbia County and built-in 1986 as drinking and recreational source, supplying water to much of the county, removing the invasive plant will be no easy task. The Wednesday news release stated that herbicides could be used once the lake is drawn down, but the Arkansas Department of Health has a strict policy of not allowing chemical applications to water supply lakes.

“That policy remains in effect, but the Health Department has agreed to research herbicide applications that have been used in water supply lakes in Texas and Louisiana,” said Gregory.

The AGFC has issued tips on how to keep the plant from spreading further.

The agency reminds boaters to use the CLEAN, DRAIN & DRY method to halt the aquatic nuisance species to other bodies of water.

• Clean the boat, trailer, and all equipment – Remove all plants and pieces of vegetation and seeds.

• Drain your boat – Remove the drain plug from your boat when you leave the water.

• Dry – Let all gear dry for at least five days before visiting new waters. If drying is not an option, spray all equipment with a high-pressure hose or hot water.

Visit www.cleandraindry.org for more information about invasive species and what hunters can do to help.