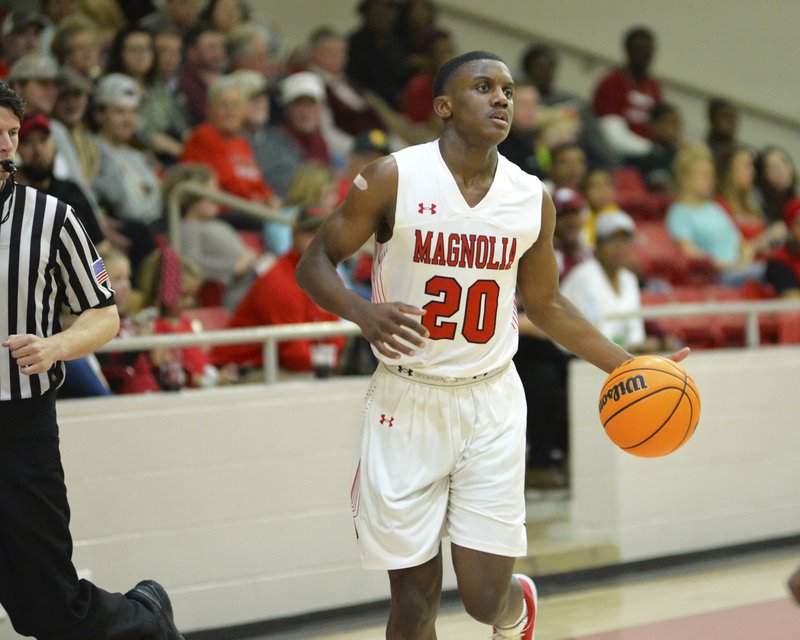 Derrian Ford (20) is seen in a Feb. 18, 2020, home game in Panther Arena. The sophomore guard on Wednesday night led Magnolia with 24 points in a win over Buaxite in the regional boys basketball tournament. The team has now punched its ticket to the Class 4A State Tournament. - Photo by J.D. Bailey

Top-ranked Magnolia (22-0) rolled to 70-36 win over Bauxite Wednesday night to secure its spot in the Class 4A State Basketball Tournament.

The Panthers, who are ranked second overall in the state behind North Little Rock, will be back on the court tonight at 5:30 in the second round of the South Region Tournament at Crossett. Magnolia, which hasn’t won a regional title, captured their first game a year ago and lost in the second round before moving on to claim the state title.

In the matchup against the fourth-seed Bauxite Miners, Magnolia leaped out to an 11-0 lead and never looked back. Colby Garland opened the game with a 3-pointer, followed by a bucket from Braelyn Beasley and three consecutive baskets by Derrian Ford.

Ford led the team in scoring with 24 points, while Garland added 22. Beasley finished with nine.

“I thought our defense played well. Ford played about as good a defense one can play on Bauxite’s Max Chenault,” said Panthers’ head coach Ben Lindsey. Chenault finished with 15 points, but Lindsey the athlete has ripped other teams apart.

“This may have been our best defensive showing all year. We were all over him and the others,” said the coach.

Chenault had a pair of 3-pointer in the first period, but the Panthers went on the lead 20-6 after the first break.

Magnolia’s defense only gave up eight points in the second period and carried a 40-14 advantage into the locker room at halftime. Ford had a pair of 3-pointers in the period, while Garland and Adrien Walker knocked down long-range shots.

Chenault hit another 3-pointer and added a free throw after being fouled on the shot.

Ford scored the first five points of the third period and the Panthers were up 47-14 after the first two minutes. A 10-0 run late in the quarter helped the Panthers go up 63-23 after three periods.

The mercy rule (continuous clock after 30-point advantage) was in effect throughout the fourth period and marked the 16th game this season Magnolia has envoked the rule on opponents.

“We stuck to our assignments and I was proud of that. I feel like we have several good players and they all are unselfish. Big time players step up in big time games. That’s what Derrian did and so did Colby,” said Lindsey. “As good as all these guys are, all they want to do is win.”

The regional finals are set for 7:30 p.m. Saturday.