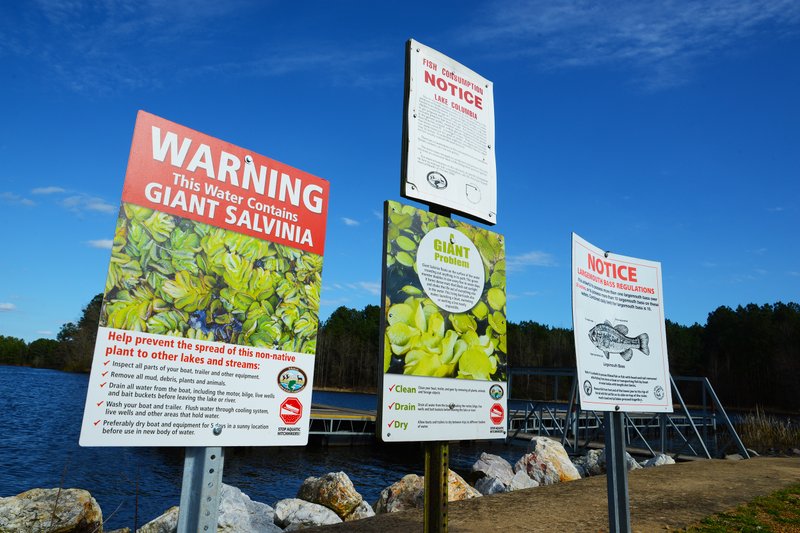 A series of warning and notice signs at Lake Columbia's South Shore Landing highlight the presence of giant salvinia in the water and tips on how to avoid its spread further.

With a need for urgent action, the Columbia County Rural Development Authority this week approved a proposed contract with Lochow Ranch Pond and Lake Management Services of Bryan, Texas, to spray the areas of Lake Columbia where the invasive plant species giant salvinia has taken over.

The final approval on the matter of the contract is still needed by the Arkansas Department of Health, but the initial phase to combat the plant is underway. There was a total of four contractors ranging from Georgia to Louisiana to Texas that submitted bids, but, ultimately, Lochow Ranch -- which also holds the contract for giant salvinia management at major waterbodies in East Texas, including the Lone Star sides of Caddo Lake and Toledo Bend -- was accepted due to the company’s reputability and experience.

The weed management company is slated to make two trips to Lake Columbia, costing an estimated $20,000 total, to hit the affected areas of the lake with two different chemicals: Galleon SC Aquatic Herbicide and Clipper Herbicide, which also attacks lake and pond watermeal. Both treatments are made for use in drinking water lakes and reservoirs, according to Lake Columbia Manager John Ed Gunnels.

“The chemicals are safe,” he said. “They’re all EPA water-approved, but we still have to get it to the health department for them to sign off.”

The plant killers also contain a surfactant, or surface-active agent similar to what many soaps or detergents use to adhere to materials or organic matter.

The in-water spray method was decided upon instead of a furthe lake drawdown after salvinia contractors recently visited Columbia and notified lake management that, even if the plant does stay on the banks after the water level has receded, any moisture at all -- dew, frost, rain, mud, etc. -- will keep the plant alive and thriving. But by leaving it on the bank, it will be much harder to kill since the larger contractors typically use airboats with spray equipment and often cannot reach the areas.

“Where it’s piled up like that, your only remedy is by hot, severe drought in the summertime,” said Gunnels. “If it stays just the least bit damp, it will come back.”

The recommendation from all of the contractors, according to Gunnels, included attacking the plant in the water, where it sits up on top of the surface for cleaner and better adherence and only in the areas of the lake containing giant salvinia -- estimated to be around 20 acres total when including shoreline sections.

“They will spray once and come back in 30 days to do it again,” said the manager.

RDA’s giant salvinia management package was sent Tuesday to the Arkansas Department of Health for final approval to use in Lake Columbia. The state organization ultimately holds the final say on any chemical moves made to address the plant problem.

Magnolia Mayor Parnell Vann said Monday that the city could be back on lake water by May or June if the salvinia treatment works and passes state standards. Gunnels noted that the health department will perform a final test on the water at the lake intake and at the treatment plant where it will seek a goal of zero parts per million for any herbicides. The city has been using Sparta Sand Aquifer wells since 2018.

With such expense for contract sprayers, the RDA hopes that Gunnels and his assistant can take on the task of spraying and managing giant salvinia themselves as part of their regular lake duties to alleviate the large costs associated the plant.

“Ninety percent of the expense is mobility and labor,” the lake manager said.

In a second motion passed Monday by the RDA, the board gave Gunnels permission to explore options for a mud boat, or craft with a high prop shaft and motor to navigate extremely shallow waters and swamp-like areas.

The cost was estimated to be around $25,000 for the boat. An airboat, which the professional contractors use, is around $125,000 and not an option for the RDA. The lake management team is also underway now to become herbicide-application certified and will be testing in March.

Gunnels noted that even if the first two sprayings at the lake by Lochow Ranch work, the problem of giant salvinia is likely not to go away. He stated that only two lakes in Texas out of the numerous infested with the invasive plant species have totally ridded themselves of the plant.

“This is just not anything I can see we’re going to get rid of permanently,” said Gunnels. “But we’ll be able to keep it under control. We can stay on it.”

Vann added that he attended a meeting recently in Texas where reps from surrounding states battling giant salvinia were also present and everyone acknowledged that the invasive species is a problem and “it’s here to stay.”

Gunnels predicted that the plant management process would probably require spraying at least twice per year and that, without a constant, large revenue stream at the lake, the facility could not afford to professionally contract plant treatment firms year after year. The lake does not charge launching fees and its only other source of revenue comes by way of campsites fees that don’t typically generate significant funds after utilities are taken into account.

“The health department and all of these companies say we need our own boat,” said Gunnels.

The state of Louisiana in 2019 spent $9 million to address its salvinia problem.