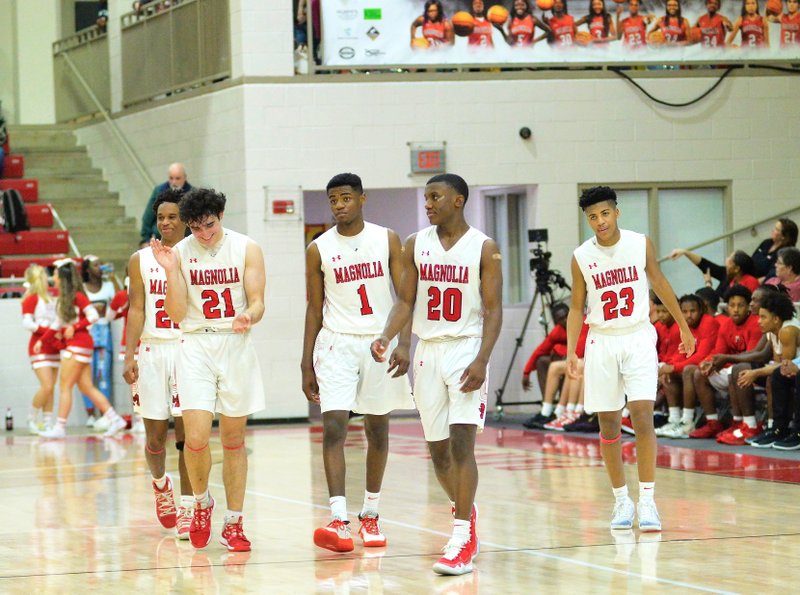 Magnolia's starting five of Braelyn Beasley (22), Kyle Carver (21), Devonte Walker (1), Derrien Ford (20), and Colby Garland (23) take the floor against Hamburg in the Panthers' home finale on Feb. 18, 2020. The undefeated team faces Warren on the road Friday to close out the regular season. - Photo by J.D. Bailey

The top-ranked team in Class 4A and defending state champions will look to complete an unbeaten regular season Friday night at Warren.

Tip-off will follow a girl’s game that begins at 6 p.m.

Magnolia has already secured the top seed in the next week South Region Tournament at Crossett, while the Warren Lumberjacks are trying to earn the second seed.

The Panthers have breezed through conference season, beating every opponent except Warren by 25 points or more, evoking the mercy rule.

Back on Jan. 28 at Panther Arena, the Lumberjacks came in with a game plan of simply holding the basketball.

The result was Magnolia’s lowest offensive output of the season, which was a 24-16 victory.

A week ago against Camden Fairview, the Cardinals didn’t slow the pace like the Lumberbacks, but wasn’t in any hurray to shoot the basketball.

Head coach Ben Lindsey said following that contest that the Panthers handled the situation well and was able to force the issue more.

Last Friday, Magnolia has its best offensive performance of the season by beating Star City 97-40.

All five starters scored in double figures and the sixth man off the bench had nine points.

“We were sitting back and playing comfortable to start with, but began to pick them up full court and applying some pressure. After that, we simply wore them down,” said Lindsey.

Star City battle the Panthers early, leading 11-9 midway through the first quarter. The game was tied 15-15 late in the quarter, but Walker’s second 3-pointer at the buzzer put the Panthers up 22-16 at the break.

Magnolia used a 20-0 run in the second period and opened the third quarter on a 13-0 burst to totally take control of the game.

The Panthers had a 50-point lead late in the third quarter before winning by 57 points.

Lindsey indicated his Panthers were hitting on all cylinders against Star City and each Panther did their job.

Braelyn and Kyle simply do what they do best. They battle harder than anyone under the board and don’t back down,” said the coach.

He noted that Walker showed what type of player he’s capable of being.

“I was also extremely proud of Colby’s performance. He was diagnosed with the flu and strep throat earlier in the week, but still came out and played a solid game,” said Lindsey.

Ford took an elbow over the eye and had to be bandaged up, but Lindsey said he showed his toughness once he re-entered the game.

At next week’s South Region Tournament, the Panthers will play at 5:30 p.m. Wednesday against the fourth seed from the 48-7 Conference.

In girl’s action, the Lady Panthers have secured the third-seed in the region tournament and will take on the 4A-7 second seed at 4 p.m. Thursday, Feb. 27 at Crossett.

A victory would not only qualify them for the Class 4A State Tournament at Farmington the following week, but put them in the region semifinals at 4 p.m. Friday, Feb. 28.

The Lady Panthers will tangle with Warren Friday night, who has secured the second place slot in the region tournament behind unbeaten Star City.

When Magnolia met the Lady Bulldogs last week, they couldn’t get on track from the start.

Star City raced out to a 23-2 first quarter lead and never looked back.

“We had a terrible first half. We missed some easy shots and things were not going our way,” Lady Panther head coach Donnell Ford said following the Star City loss.

He said Lady Panthers must continue to play hard, close the regular season strong and have a good showing in the region tournament.

“I thought against Star City we fought hard in the third and fourth quarters. That was something positive I believe will carry us here on out,” added the coach.