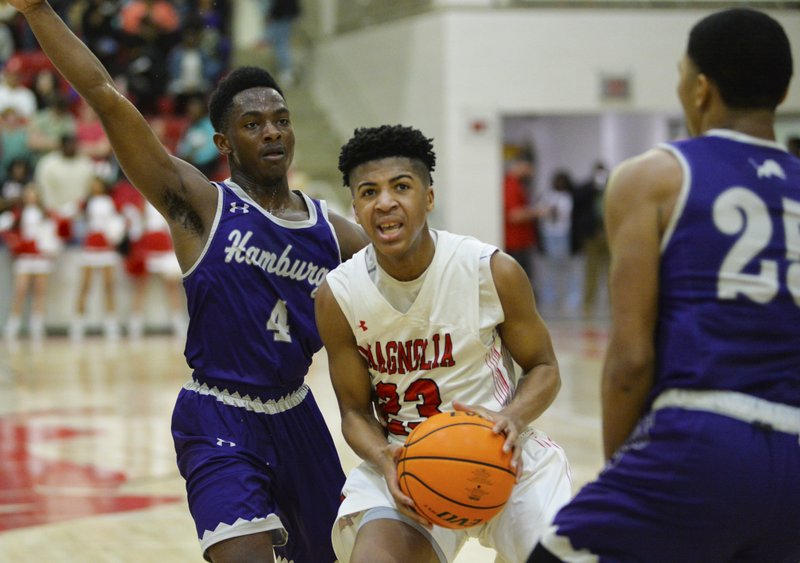 Magnolia sophomore Colby Garland pushes the ball up the court for the unbeaten Panthers. - Photo by J.D. Bailey

Magnolia claimed the 4A-8 Conference title Tuesday night with an impressive 46-point win over Hamburg.

With the regular season finale set for Friday at Warren, the unbeaten and No. 1-ranked Panthers (20-0) will be the top seed in next week’s Class 4A South Region Tournament at Crossett.

Magnolia is looking to win its first regional crown, after being defeated by Monticello in the second round last season before going on and winning the state championship.

This year’s state tournament will be March 2-7 at Farmington.

“I’m very happy for the kids. I know everyone has aspirations of greater things beyond this, but no matter what, their names will go on a banner for conference champions,” said head coach Ben Lindsey.

During the 88-42 victory over Hamburg, Lindsey said his team’s overall defense was good.

“I told them to come out with respect for Hamburg because we only led 21-18 after the first quarter at their place. They did exactly what I asked them to do,” explained the coach.

The Panthers led 27-11 after one period, ahead by 26 points at halftime and 41 points after three quarters.

“When you have shooters like Devonte and Collby, people have to come out on them. That opens things up for Derrian around the rim, while Braelyn and Kyle are there to clean up,” stated Lindsey.

The coach said he has been reminding his players to stay focus on what’s in front of them.

“It’s okay to wish for the future, but enjoy what you have because nothing is guaranteed, not even tomorrow. Right now, we are preparing for Warren because that’s the next game in front of us,” he said.

A month ago, the Lumberjacks came into Panther Arena and slowed the game to a snail’s pace. The Panthers ended up winning 24-16, but Warren led 13-12 at the half.

“I don’t know what they will do at their place, but we are preparing for every,” said Lindsey. “It was tough on us when they put four athletic guards out there. They ran a box-and-one on Colby the first time, but I think Devonte will be much better this time around.”

The Lady Panthers (13-7, 7-4) locked down the third seed in the region tournament following a 50-23 win over Hamburg Tuesday night. They close the regular season at 6 p.m. Friday at Warren.

“We want to close the season on a winning note as we head into the tournament,” said head coach Donnell Ford.

Against Hamburg, Magnolia led 18-0 after one quarter and was up 37-4 at halftime. After three periods, the Lady Panthers held a 50-12 advantage.

“They didn’t handle our pressure very well. We were able to get the lead and eventually pulled away,” said the coach. Kiara Frazier and Jadda Purifoy led the team in scoring with nine points apiece, wile four other Lady Panthers had six points each.

At the upcoming region tournament, both the Panthers and Lady Panthers know what time they will play, but not who their opponents will be. The 4A-7 Conference will play a district tournament to determine their top four teams in the South Region.