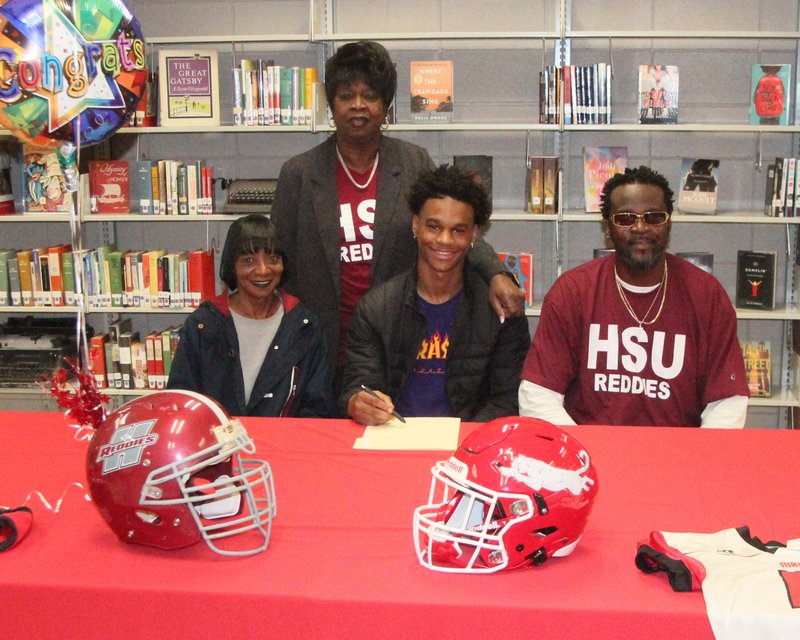 A soft spoken Braelyn Beasley didn’t have much to say after signing an NCAA Division II letter-of-intent Monday afternoon.

“I want to thank all of y’all for being here and I love you all,” the all-state quarterback said after choosing to play for the Henderson State Reddies next fall.

“I am very excited to get this chance to play college football and further my education,” said Beasley.

He was the center of attention when fellow students, teachers, coaches, family, and administrators gathered in the Magnolia High School Media Center for the announcement.

“Magnolia has been great and supportive in preparing me for this next level,” said Beasley.

Beasley, a two-way athlete who also played in the secondary, led the Panthers to a 7-4 overall record, tie for second place in the 5A-South Conference and to the Class 5A state playoffs.

“He’s a remarkable young man and I hate I had only one year to coach him,” said Mark King. “It’s a great day for Braelyn and all the years of hard work has paid off for him.”

According to King, Beasley was not only an all-conference and all-state performer, but was the league’s top quarterback and defensive back.

“He led the league with six interceptions,” said King.

The Magnolia athlete was one of four Panthers selected to play in the first-ever Fellowship of Christian Athletes (FCA) All-Star Game, which matches Arkansas vs. Texas athletes.

Also, Beasley was chosen to participate in the annual Arkansas High School All-Star Game in June.

“This is a very big honor, because only a select few get to play in this event. Braelyn will probably play defensive back and wide receiver in that game,” mentioned King.

The first-year coach called it an honor to have an athlete like Beasley and said he was a team leader for the Panthers.

“His hard work has paid off for a full athletic scholarship to Henderson State University. We couldn’t be more proud of him,” added the coach.

Magnolia athletic director Dyun Long said Beasley is one of several great student-athletes on the campus.

“It’s good to see kids like this have some success in life and that’s what we want for everyone,” said Long.

He praised Beasley for his efforts and added he’s looking forward to seeing him play college football.

Though Beasley will be missed, King said it’s time for others to step up and do the things he did.

“We have some good young kids, including an undefeated 9th grade bunch. We had many underclassmen who got a lot of playing time. So there are some players who ought to be ready to step in and fill the holes left by our seniors,” said King.

Looking ahead to football 2020

Magnolia has revamped its 2020 nonconference football schedule with a pair of powerhouse Class 5A schools and the return of a traditional winning Class 6A program.

King agreed that the Panthers have beefed up its nonconference schedule with some quality opponents to go along with an already tough 5A-South league.

“Our league is going to be a lot better next year because everyone was young. Our nonconference will be brutal and tough,” stated King.

The Panthers and Harrison Gobblins will open the season Aug. 28 in Little Rock.

The Gobblins lost by only seven points to Class 5A State Champion Pulaski Academy, who pounded Little Rock Christian in the finals and rolled over the Panthers in first round.

Little Rock Christian had beaten Pulaski Academy during the regular season, giving them their only loss.

On Sept. 4, MHS travels to Crossett, who reached the Class 4A semifinals a year ago. The Eagles had a commanding lead over the Panthers in the fourth quarter before Magnolia pulled off a miracle win.

On Sept. 11, the Panthers will play at Little Rock Christian, who won the 2018 crown.

“We renewed our rivalry with El Dorado and everyone knows what they are capable of doing,” said King.

The final nonconference game will be the home opener at Panther Stadium against a Wildcat team that lost in the first round of the Class 6A playoffs last season.

“No doubt it’s going to be a tough nonconference schedule. I am a firm believer that the better competition you play, the better your team is going to be,” explained King. “I don’t think you get much out of beating up on weaker teams and we wanted to strengthen that schedule and get ready for a tough, tough conference.”

The coach said the process now is for his athletes to hit the weight room, get bigger and stronger, and be ready for next year.

Homecoming will be earlier this year at Magnolia, with Arkansas High coming to town on Sept. 25.

Magnolia will have an open date on Oct. 23.