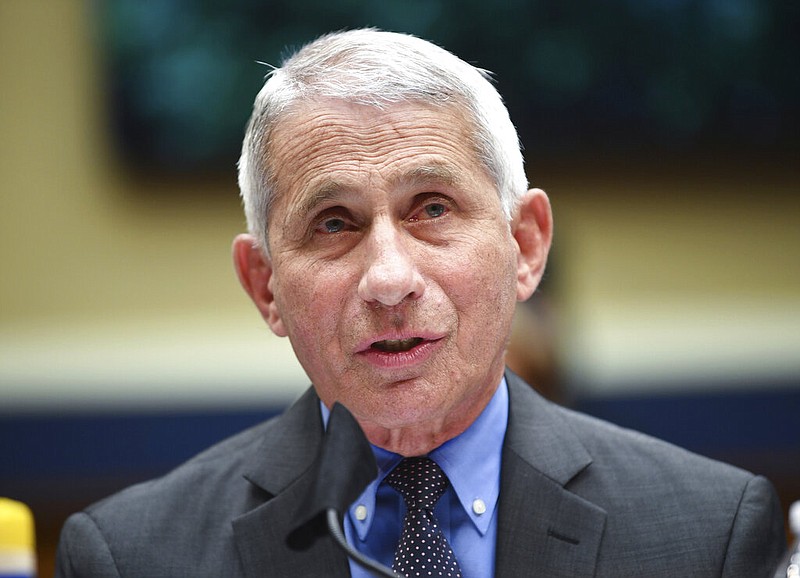 Dr. Anthony Fauci, director of the National Institute of Allergy and Infectious Diseases, testifies before a meeting of the House Committee on Energy and Commerce on Capitol Hill in Washington in this June 23, 2020, file photo. - Photo by AP / Kevin Dietsch

Dr. Anthony Fauci, the nation's top infectious-disease expert, warned Sunday that the significant number of Americans traveling over the holidays could mean new spikes in cases on top of the existing surge.

"We very well might see a post-seasonal -- in the sense of Christmas, New Year's -- surge," Fauci said on CNN's "State of the Union."

"We're really at a very critical point," he said. "If you put more pressure on the system by what might be a post-seasonal surge because of the traveling and the likely congregating of people for, you know, the good warm purposes of being together for the holidays, it's very tough for people to not do that."

Fauci also endorsed the decision of U.S. officials to require negative covid-19 tests before letting people enter the U.S. from Britain, saying that the variant strain first detected in the U.K. that has spread to other nations is something "to follow very carefully."

On "Fox News Sunday," Adm. Brett Giroir, the administration's testing coordinator, noted that Thanksgiving travel did not lead to an increase of cases in all places, which suggested that many people heeded recommendations to wear masks and limit the size of gatherings.

"It really depends on what the travelers do when they get where they're going," Giroir said. "We know the actual physical act of traveling in airplanes, for example, can be quite safe because of the air-purification systems. What we really worry about is the mingling of different bubbles once you get to your destination."

Still, U.S. case numbers are about as high as they have ever been. Total infections surpassed 19 million Saturday, meaning that at least 1 in 17 people have contracted the virus over the course of the pandemic. And the virus has killed more than 332,000 people -- 1 in every 1,000 in the country.

Two of the year's worst days for deaths have been during the past week. A number of states set death records Tuesday or Wednesday, including Alabama, Wisconsin, Arizona and West Virginia, according to The New York Times' data.

And hospitalizations are hovering at a pandemic high of about 120,000, according to the COVID Tracking Project.

Against that backdrop, millions of people in the United States have been traveling, though many fewer than usual.

About 3.8 million people passed through Transportation Safety Administration travel checkpoints between Wednesday and Saturday, compared with 9.5 million on those days last year. Only one-quarter of the number who flew on the day after Christmas last year did so Friday, and Christmas Eve travel was down by one-third from 2019.

AAA's forecast said more than 81 million Americans would travel by car for the holiday period, from Wednesday to Jan. 3, which would be about one-third fewer than last year.

For now, the U.S. is no longer seeing overall explosive growth, although California's worsening outbreak has canceled out progress in other parts of the country. The state has added more than 300,000 cases in the seven-day period ending Tuesday. And six Southern states have seen sustained case increases in the past week: Tennessee, Alabama, Georgia, South Carolina, Florida and Texas.

Holiday reporting anomalies may obscure any post-Christmas spike until the second week of January. Testing was expected to decrease around Christmas and New Year's, and many states said they would not report data on certain days.

The U.S. has not yet reported any cases of the British variant. But the the Centers for Disease Control and Prevention said Thursday that it will require all airline passengers arriving from Britain to test negative for the coronavirus within 72 hours of their departure. The rule will take effect today.

British officials are telling their U.S. colleagues it appears that the vaccines being rolled out will be strong enough to deal with the new variant but, Fauci said on "State of the Union," "we're going to be doing the studies ourselves."

The rapid spread of the variant led to the lockdown of London and southern England, prompted a temporary French blockade of the English Channel and resulted in countries around the world barring travelers coming from Britain. Because few countries have the level of genomic surveillance that Britain does, there is concern that the variant may have been traveling across the world undetected for weeks.

A recent study by British scientists found no evidence that the variant was more deadly than others but estimated that it was 56% more contagious.

The British variant has been diagnosed in seven people in Japan, the country's health ministry said. All had either recently traveled to Britain or were in contact with someone who had.

The discovery in Japan prompted the country to close its borders to all new entry by nonresident foreigners. The ban will go into effect at midnight today and last through the end of January, the public broadcaster NHK reported.

In Spain, the variant was found in the capital region, local authorities said Saturday. Antonio Zapatero, a regional health official, said four cases had been confirmed in Madrid, while another three were being treated as suspicious. At least two of the cases involve people who had recently been to Britain and then tested positive in Madrid, as well as some of their relatives.

In France, the first case of the new variant was identified Friday, according to the country's health ministry. Officials said the patient was a French citizen living in Britain who had traveled from London to Tours, a city in central France, on Dec. 19, a day before the British government imposed a lockdown because of the variant.

Officials in Sweden said Saturday that a case of the variant had been detected there after a traveler visited Sormland, near Stockholm, from Britain over Christmas, Reuters reported.

Health officials in Ontario, Canada, said Saturday that they had confirmed two cases of the variant in the province. The two cases included a couple from Durham, about 90 miles northwest of Toronto. The couple had no known travel history, exposure or high-risk contacts, the province's health ministry said.

And Sunday, the Institute of Public Health in Oslo reported that two travelers from Britain who had entered Norway this month had the new variant, according to Reuters.

Pascal Soriot, the chief executive of drugmaker AstraZeneca, which is developing a coronavirus vaccine widely expected to be approved by U.K. authorities this week, said researchers believe the shot will be effective against a the new variant of the virus.

Soriot also told the Sunday Times that researchers developing its vaccine have figured out a "winning formula" making the jab as effective as rival candidates.

Some have raised concern that the AstraZeneca vaccine, which is being developed with Oxford University, may not be as good as the one made by Pfizer already being distributed in the U.K. and other countries. Partial results suggest that the AstraZeneca shot is about 70% effective for preventing illness from coronavirus infection, compared with the 95% efficacy reported by Pfizer and its German partner BioNTech.

[Video not showing up above? Click here to watch » https://www.youtube.com/watch?v=zJIJXkRwve0]

"We think we have figured out the winning formula and how to get efficacy that, after two doses, is up there with everybody else," Soriot said. "I can't tell you more because we will publish at some point."

Britain's government says its medicines regulator is reviewing the final data from AstraZeneca's phase three clinical trials. The Times and others have reported that the green light could come by Thursday, and the vaccines can start to be rolled out for the U.K. public in the first week of January.

Asked about the vaccine's efficacy against the new variant of coronavirus spreading in the U.K., Soriot said: "So far, we think the vaccine should remain effective. But we can't be sure, so we're going to test that."

Information for this article was contributed by Lauren Wolfe, Andrea Kannapell, Ben Dooley, Raphael Minder, Marc Santora, Isabella Kwai and Norimitsu Onishi of The New York Times; and by Sylvia Hui and staff members of The Associated Press.