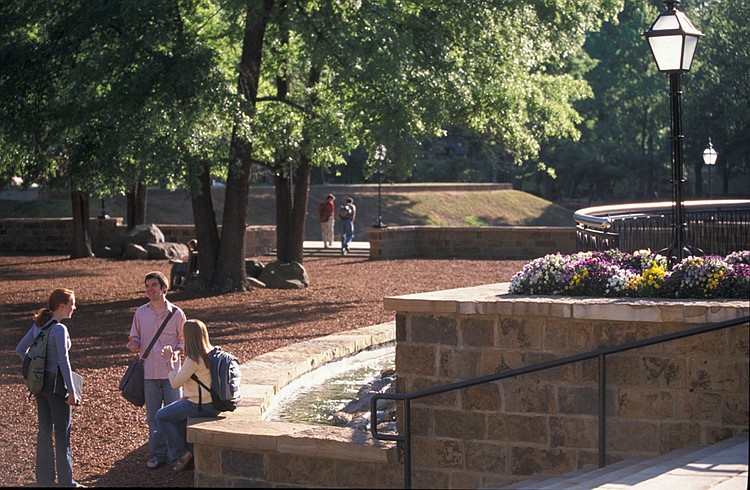 Jayson Crumpler handled the stress of the novel coronavirus pandemic mostly on his own until he went to college -- online.

Crumpler graduated from Cabot High School this spring, a part of what some have dubbed "The Class of Covid-19."

At first it was like a vacation. Then it wasn't. Prom was canceled. Graduation was canceled. Students had no homework but not much else to do, either.

Crumpler struggled but couldn't afford to pay for a therapist on his own. He'd sought help through his school but couldn't find anyone who could offer the kind of care he needed. That was partly why he started the Arkansas Students United for Mental Health before the pandemic. He and other co-founders wanted to see if schools could do even more to help their students.

In the meantime, he waited. He talked with friends about what was bothering him and otherwise resigned to "deal with it" himself.

"It just bottled up over the summer," he said.

Then Hendrix College, where he enrolled this August, said it could help him. He's been seeing Dr. Mary Anne Seibert, the college's director of counseling services, every week since via video call. Services are free at Hendrix and generally cheaper on college campuses.

Crumpler is one of thousands of Arkansas college students who have sought mental health care through their colleges this fall. The number of counseling visits is up at many campuses, which officials partly attribute to the pandemic's mood-burying heft and the toll it's taken on people's motivation to succeed.

"The financial stress of being a student these days seems like it just continues to get harder and harder," Seibert said.

Visits are down at other colleges, and officials point to free covid-19 crisis services offered by some Arkansas community mental health centers.


[Interactive tables not showing up above? Click here to see them: arkansasonline.com/schools]

The pandemic also has complicated mental health care in another way: Out-of-state students who have chosen to stay home may not be able to see their on-campus therapist via telemedicine because the therapist may not be licensed outside of Arkansas. Some students have been referred elsewhere, while others can see their therapists under temporary licenses issued to the therapists by the students' home states.

While visit clinic patterns this year have varied, student health centers and mental health clinics have played a growing role in students' lives.

In recent years, students' use of campus health centers and mental health services has increased at Arkansas universities, though university budgets and staffing for them largely has not.

The number of mental health clinic visits has increased by the hundreds and the number of clients by the dozens each year at some Arkansas universities, according to data obtained by the Arkansas Democrat-Gazette. More than 1,000 people sought mental health care at the University of Arkansas last academic year, up from 836 two years prior.

Wait times for mental health services, according to schools that track them, can be one to several days. In a crisis, however, schools say they'll see anyone on the spot.

At one point this fall, at the University of Arkansas at Little Rock, the mental health clinic had no openings for three weeks. Counselors took on more clients to make room for new clients and anyone needing services sooner.

Students are struggling, especially seniors, said Aresh Assadi, UALR's assistant director of counseling services. Seniors are worried about the economy and finding a job during a pandemic that has forced layoffs and furloughs on many young people.

Despite enrollment declines, UALR has expanded its counseling services in response to the increasing demand. That is because of support from administration, Assadi said. This year, the university added a counselor.

Counseling sessions have increased for years in part because of need and in part because of messaging. That includes social media campaigns, suicide prevention walks and self-care events -- things that "normalize treatment-seeking," Assadi said.

Plus, the traditional college age is a critical time for brain development. Most mental illnesses onset in a person's late teens and early 20s, Assadi said. Reducing the stigma of treatment-seeking brings in a demographic that on average needs care more than most.

"I'm glad to see this because untreated mental health causes all kinds of issues," he said.

Outreach has been key to checking in on people when they are farther away than they normally are, students and therapists said.

Some colleges check in with students via social media.

Posts from the University of Arkansas at Fort Smith's social media accounts ask students how they are feeling.

Sometimes they respond directly to the social media account and say they aren't doing well, university spokeswoman Rachel Putman said. Then the person monitoring the account refers the student to counseling, often offering to have counseling services call them.

Campus groups and resident assistance at Arkansas colleges have tried to do similar things, despite in-person programming, including events they thought they may be able to have, being canceled.

Having electronic chats with floormates can help people keep an eye on one another, said Maddie Johnson, a first-year student at the University of Arkansas, Fayetteville, who with Crumpler co-founded Arkansas Students United for Mental Health.

Students who talked to the newspaper emphasized communication and finding ways to connect with people as a key to feeling better.

They appreciated group chats and activities and professors who check in with them and are responsive; they felt frustrated in large lecture classes taken online because communication with instructors was harder.

Quality communication is especially important, said Finn Beruldsen, a senior biochemistry major at Hendrix. He's noticed virtual communication is more often inspired by necessity than in-person interaction. Only communicating when you need something can foster negative emotions, he said.

But some virtual means of connecting will stick around, some predict.

Telemedicine won't go away after the pandemic, Assadi said. Students prefer it, he said. It's more convenient.

Being able to provide therapy through video chat services -- that can be encrypted -- has improved the ease of access to care. Assadi said his office doesn't have as many cancellations as it normally does.

Therapists who spoke with the newspaper -- from UALR, UAFS and Hendrix College -- said they were doing almost exclusively telemedicine.

In emergency situations, they'll see someone in person. That could be indoors, wearing masks and six feet apart, or it could be walking outdoors.

In-person therapy has advantages telemedicine doesn't, they said, but telemedicine will stick around as a popular choice post-pandemic.

Similarly, conversations taking place now, inspired by covid-19, will have similar resonance beyond the pandemic. Therapists want people to go easy on themselves more often.

Seibert acknowledges that young people are often told college will be the best years of their lives. But "the academic, social and personal adjustment to college can take longer than they expect or anticipate, resulting in stress and anxiety."

The pandemic compounds that stress, loneliness and isolation, she said.

Seibert also urges people to not beat themselves up. If you're feeling unmotivated, she said, you're not alone.

"Among things we've been talking a lot about is self-compassion and the importance of being really kind of gentle with oneself," she said. "Think about the mind-set you have, and to not be so harsh with yourself."

Take walks, she said. Try to get more sleep. Get coffee outside with a friend.

Karen Martindale-Orite, a licensed professional counselor who works on the UAFS campus, wants people to appreciate their own resiliency -- their ability to rebound from isolation or job loss or a loss of independence or from everyday stressors, including what they can't control.

People can get overwhelmed from the relatively incessant adrenaline rush of modern society, she said, but terrible things can end.