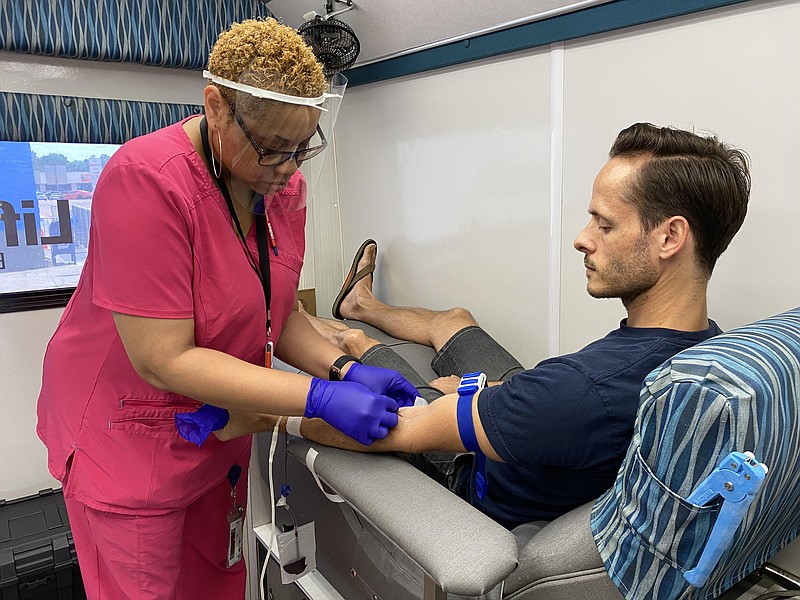 In this June 22, 2020 file photo, a LifeShare mobile blood center was accepting donations at the Magnolia Walmart. - Photo by Rhett Gentry

An emergency appeal to the public has been released by LifeShare, urging residents in the area to donate blood. According to a statement released by the nonprofit, LifeShare only collected 393 units of red blood cells since Thursday. That is 26% of the blood LifeShare needs to support treatments requiring a blood transfusion at local hospitals.

“For more than a week, LifeShare has been reaching out to other blood centers for help, but because of the nationwide blood shortage, only a few blood centers were able to provide minimal assistance,” read the statement from LifeShare.

The organization is currently operating on extended hours at all of its donor centers, with mobile centers coming to local areas throughout the week. LifeShare noted that although the emergency appeal was issued to everyone, they are trying to focus on young donors.

“This is a time of year when we would typically be in our high schools and colleges,” said LifeShare Regional Director Elizabeth Cunningham. “Because of COVID-19, many of these blood drives are canceled or are yielding far fewer donors than usual.”

Cunningham said that most people do not recognize that nearly one-quarter of the blood supply comes from teenagers, further stating that young people are the backbone of the local blood supply.

According to the statement, LifeShare has taken extra safety precautions during the COVID 19 outbreak. They state that there have been no reports of a LifeShare team member or a LifeShare donor contracting the virus from interacting with each other during the donation process.

At Magnolia Regional Medical Center (MRMC), Director of Laboratory Services Donna Schobey spoke to the Banner-News about the hospital’s blood supply. She stated that the red blood cell inventory is stocked but the hospital was having a hard time receiving platelets that are available.

LifeShare helps supply MRMC with blood, but blood supply outside of the local area can still affect the hospital.

“Even donations in Shreveport impact us,” stated Schobey. She said that the hospital was notified by LifeShare of the low supplies earlier in the week, but insisted that while there is a cause for concern, people should not panic.

“Physicians are aware and (we) have a plan to utilize the supply,” stated Schobey.

In its statement, LifeShare acknowledged that they do not use the word “emergency” often. The last emergency appeal from LifeShare was issued more than 15 months ago.