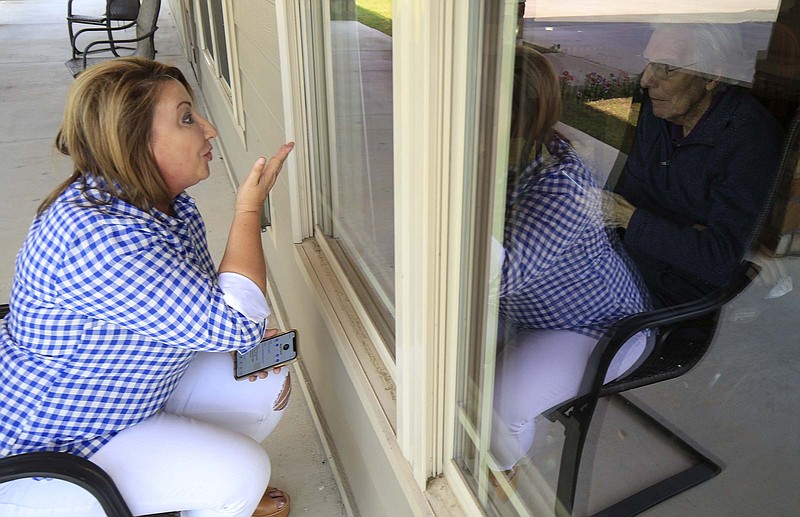 WASHINGTON -- Covid-19 cases in U.S. nursing homes jumped nearly 80% earlier this summer, driven by rampant spread across the South and much of the West, according to an industry report released Monday.

"The case numbers suggest the problem is far from solved," said Tamara Konetzka, a research professor at the University of Chicago, who specializes in long-term care. She was not involved with the study.

Long-term care facilities account for less than 1% of the U.S. population, but more than 40% of covid-19 deaths, according to the COVID Tracking Project.

The White House announced in late July the release of $5 billion for nursing homes, while launching a program to equip each of some 15,000 facilities with a fast-test machine to screen residents and staff for the coronavirus.

Monday's study from the American Health Care Association found there were 9,715 coronavirus cases in nursing homes the week starting July 26, a 77% increase from a low point the week of June 21. The group is the industry's main trade association.

The virus nationwide has been blamed for over 170,000 deaths and 5.4 million confirmed infections.

Nursing homes in Sun Belt states had more time to prepare than facilities in the Northeast that were hit in late winter and early spring. But Konetzka and other researchers have been warning that once a community anywhere experiences an outbreak, it's only a matter of time before the coronavirus enters its nursing homes. A leading theory is that staffers who don't yet know they're infected unwittingly bring the virus in. Inside, the coronavirus encounters an ideal environment in which to spread among frail older people living in close quarters.

"As the virus surges in Sun Belt states, there's no reason to think it won't affect nursing homes in the same way it did in states that surged earlier," said Konetzka. "We have learned some things about how to minimize the effect in nursing homes, but providers need the tools to implement those best practices. This is the critical role of federal policy that has not been fulfilled-- securing supply chains for [personal protective equipment] and rapid testing."

The industry analysis illustrates the march of the virus across the U.S.

As of the week of May 31, fewer than one-third of the weekly coronavirus cases were from nursing homes in Sun Belt states. But by the week starting July 26, that share was 78%.

Deaths followed a similar pattern. Nursing homes in states across the South and parts of the West accounted for 28% of deaths the week of May 31. That share was 69% by the week starting July 26.

President Donald Trump's administration says it's executing on its plan to provide fast-test machines to nursing homes and make sure that all facilities have the protective equipment they need. But Seema Verma, head of the Centers for Medicare and Medicaid Services, said states and nursing homes also have responsibility to safeguard residents. She called on nursing homes to step up their game.

"The reality is that [a] facility's infection control practices is the number one factor leading to the spread of COVID within these facilities," Verma said in a statement. Inspectors "have seen staff forgetting to wash their hands, congregating in break rooms, and wearing [protective equipment] improperly. All the testing in the world is for naught if staff don't adhere to the basic, longstanding infection control practices that the federal government has had in place for years."

On Monday, Texas surpassed 10,000 confirmed coronavirus deaths as the lingering toll of a surge of summer outbreaks continues, and health experts expressed concerns that recent encouraging trends could be fragile as schools begin reopening for 5 million students across the state.

Roughly four in every five of those deaths were reported after June 1. Texas embarked on one of the fastest reopenings in the country in May before an ensuing surge in cases led Republican Gov. Greg Abbott to backtrack and impose a statewide mask order. August has seen an improving outlook, although Texas officials are now concerned that not enough people are seeking tests.

The Texas Department of State Health Services reported 51 new deaths Monday, along with more than 2,700 new cases, Numbers are typically lower on Monday due to reporting lags over the weekends.

Texas joins New York, New Jersey and California as the other states to surpass 10,000 coronavirus deaths. Florida is also approaching the grim milestone.

Hundreds of new deaths have been reported daily in Texas over recent weeks, dampening otherwise positive signs that include hospitalizations falling off by the thousands since July and the rate of positive cases on the decline. Many of the most recent deaths reported actually occurred weeks ago since Texas doesn't add them to the state's tally until death certificates are filed.

School is underway for some Texas students although some districts have pushed back the first day of class until September. And even when school does return, Texas is giving schools the option of offering virtual instruction into November.

Abbott is now urging Texans not to grow complacent as the numbers improve and schools and universities reopen. Already elsewhere in the U.S., new virus clusters have sprung up at the start of the fall semester, some of them linked to off-campus parties and packed clubs.

As states around the country require visitors from areas with high rates of coronavirus infections to quarantine upon arrival, children taking end-of-summer vacations to hot spots are facing the possibility of being forced to skip the start of in-person learning at their schools.

More than a dozen states have such travel advisories, including many in the Northeast along with Alaska, Kentucky and Ohio.

More than 30 states are on the list issued by Connecticut, New York and New Jersey in an attempt to prevent another surge of covid-19 in the region, which was among the hardest hit early in the pandemic. As schools in the Northeast prepare to open early next month, officials are urging parents to be mindful of that guidance while planning any Labor Day getaways.

In Connecticut, where infection numbers are among the lowest in the country, more than half of schools are planning to open for in-person learning. Gov. Ned Lamont made it clear this month that neither students nor teachers would be exempt from quarantine if they visit a hot spot.

"Don't go to South Florida; don't go to Phoenix, Arizona, and skip El Paso, Texas, and I would stay away from Southern California for a while too," said Lamont, a Democrat. "I would stay close to home. I think there are some amazing places you can visit here and do it a lot safer."

'A CULTURE OF MASKS'

Countries that had seen a summer respite from coronavirus outbreaks tracked swiftly rising numbers of new confirmed cases Monday, prompting fears among government leaders and health officials that months of hard-won progress would be lost in just days as vacationers return home.

New restrictions on leisure activities accompanied the final weeks of summer break in Europe. Hourslong traffic jams formed at the Croatia-Slovenia border over the weekend as Austrians trying to beat a midnight quarantine deadline rushed home from a favored coastal vacation spot.

With one goal in mind, the Italian government closed discos, required masks from 6 p.m. to 6 a.m. anywhere people might gather and began testing all arriving travelers from Spain, Greece, Malta and Croatia.

"Our priority must be the reopening of schools in September in full safety," Italian Health Minister Roberto Speranza said. Italy's schools have been closed nationwide since early March.

France's two largest cities, Paris and Marseille, widened the areas where masks are required, and the French government sent riot police to the Marseille region to enforce the requirement.

The country's labor minister is planning negotiations today on making masks mandatory in all workplaces and other employee safety measures. French government studies indicated that at least a quarter of new virus clusters that emerged from May 9 to Aug. 11 were linked to workplaces.

"We need a culture of masks, a culture of protective measures. We failed to deliver this clear message in the first wave," Dr. Giles Pialoux, the head of infectious diseases at Tenon Hospital in Paris, told France Inter radio on Monday. "We need strong and coherent messages. I think the strategy of fear does not work."

In Greece, health officials attributed many new infections to wedding receptions and people ignoring social distancing and other public health protective measures while on vacation. Authorities began carrying out spot checks on ferry passengers returning to the mainland from the Greek islands amid growing concern of vacationers transporting the virus back to cities.

Despite the rise in cases, officials say schools will reopen as planned in Greece on Sept. 7.

Schools in northern regions of the Netherlands are reopening this week with most pupils expected back in classrooms by Wednesday without social distancing or masks. Students returning from vacations in high-risk areas must quarantine at home for 14 days.

In Lebanon, reported coronavirus cases have surged after the devastating blast at the Beirut port earlier this month, prompting medical officials Monday to call for a two-week lockdown. The blast overwhelmed the city's hospitals and badly damaged two playing a key role in treating covid-19 patients.

A new outbreak in New Zealand's largest city, Auckland, prompted Prime Minister Jacinda Ardern to delay the country's national election by four weeks. She said it would be the only postponement in the vote.

In South Korea, a conservative pastor who has been a bitter critic of the country's president tested positive for the coronavirus, health authorities said Monday, two days after he participated in an anti-government protest in Seoul that drew thousands.

In South Africa, which is five months into one of the world's longest and strictest lockdowns, those restrictions finally were bringing signs of progress.

With the number of new cases declining and other indicators showing that South Africa has passed its first peak, the country will resume sales of liquor and cigarettes today, and allow bars, restaurants, gyms, places of worship and other venues to reopen, all with distancing requirements. Schools are set to reopen gradually beginning next week.

South Africa has reported over 589,000 confirmed cases as of Monday accounting for more than half of the 1.1 million cases throughout Africa.

Information for this article was contributed by Pat Eaton-Robb, Mike Catalini, Paul J. Weber, Lori Hinnant and Andrew Meldrum of The Associated Press. 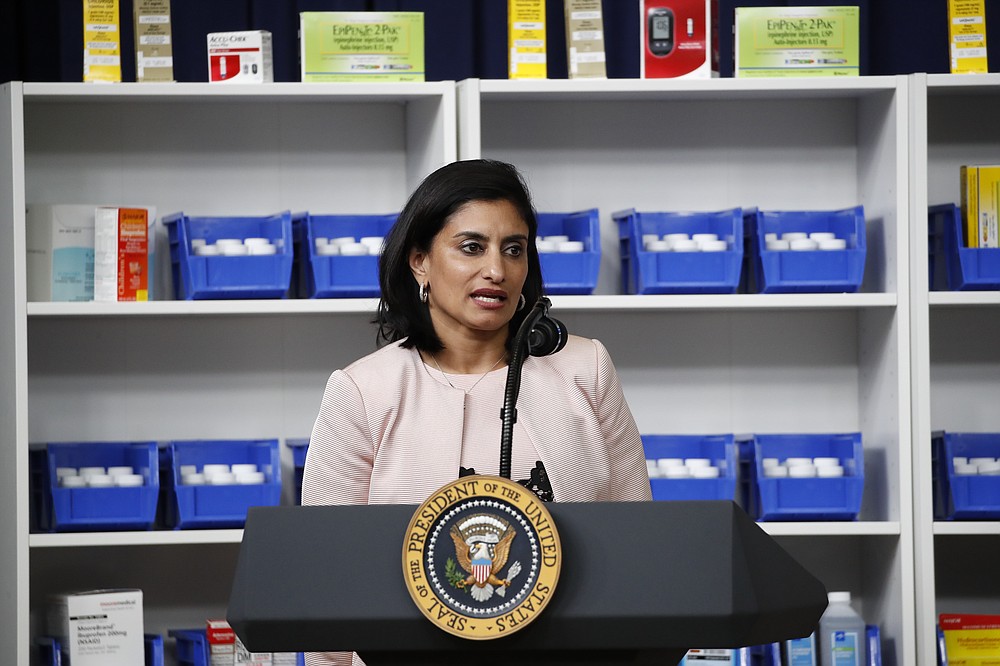 Administrator of the Centers for Medicare and Medicaid Services Seema Verma speaks during an event with President Donald Trump to sign executive orders on lowering drug prices, in the South Court Auditorium in the White House complex, Friday, July 24, 2020, in Washington. (AP Photo/Alex Brandon)