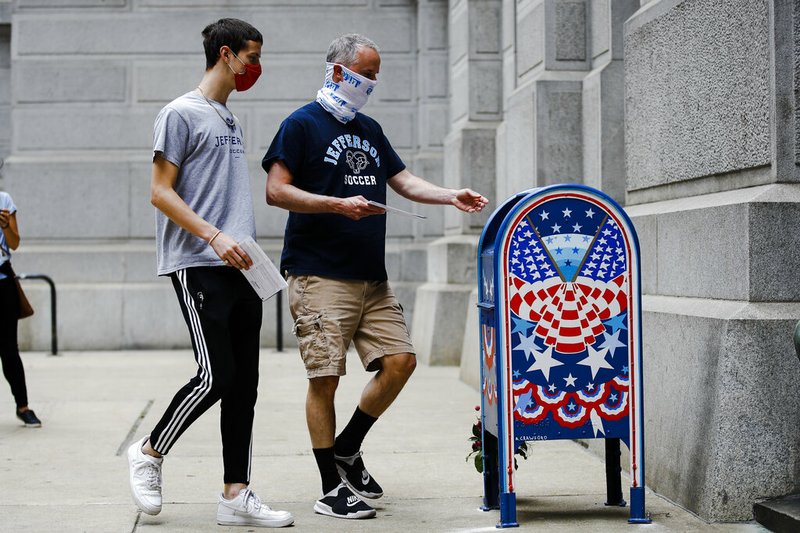 Benjamin Graff (right) and his son Jacob Graff, 19, drop off their mail-in ballots for the Pennsylvania primary in Philadelphia on Tuesday, June 2, 2020. - Photo by AP / Matt Rourke

There is a "significant risk" that the U.S. Postal Service will fail to deliver some Arkansas ballots in time to be counted this November even when they are returned promptly, an attorney for the agency is warning state election officials.

"This mismatch creates a risk that ballots requested near the deadline under state law will not be returned by mail in time to be counted under your laws as we understand them," Marshall added.

"Where voters will both receive and send a ballot by mail, voters should submit their ballot request early enough so that it is received by their election officials at least 15 days before Election Day at a minimum, and preferably long before that time," Marshall wrote.

"[I]f state law requires ballots to be returned by Election day, voters should mail their ballots no later than Tuesday, October 27," he wrote.

Asked why it had taken 16 days for the letter to make its way from Washington, D.C., to Little Rock, Niehaus said: "Good question, we have no idea."

"The one thing I will say is that we have been in fairly regular contact with USPS officials in Arkansas, and never once have they mentioned a concern about ballots being returned on time," Niehaus said.

"I am not aware of the letter. I will review and have a comment Monday," he said in a written statement.

"We have less than 3 months to get this right and we need to take the necessary steps to assure the election is conducted smoothly and timely," he said.

On the Postal Service's website, voting by mail is portrayed as an "efficient and effective means for citizens to participate in the voting process."

"The Postal Service will ensure the dependable and timely delivery of Election Mail and Political Mail," it pledges. "Customers can trust the Postal Service to deliver their mailed ballots in a timely manner."

Marshall's letter, on the other hand, says Americans should "allow for contingencies (e.g., weather issues or unforeseen events)."

In Arkansas, an absentee ballot can be obtained if the voter will be "unavoidably absent" from the polling site on Election Day or is "unable to attend the polls on Election Day because of illness or physical disability."

Given the circumstances, Thurston and Hutchinson have both embraced a broad interpretation of "unavoidable absence."

As Hutchinson's Aug. 7 executive order put it, Arkansas voters are unavoidably absent if they believe in-person voting "may be a risk to their health or the health of others due to the COVID-19 pandemic."

[DOCUMENT: Read the letter from the U.S. Postal Service » arkansasonline.com/817marshall/]

These ballots must arrive in the county clerk's office by 7:30 p.m. Nov. 3 in order to count.

It recommends that officials send ballots to voters via First-Class Mail, which is typically delivered within 2-5 days.

The Postal Service has sent similar warnings to election officials in 46 states and the District of Columbia, The Washington Post reported.

The warnings come as a new postmaster general, major Republican fundraiser Louis DeJoy, is making sweeping changes to the agency he leads.

The overhaul comes as the Postal Service is struggling with a pandemic and the business slowdown that accompanied it.

House Democrats included $25 billion in emergency funding for the Postal Service in a covid-19 aid package they passed in May. The Republican-controlled Senate began its summer recess last week without passing its own covid-19 relief bill.

In April, Trump criticized the agency for not charging more for deliveries, telling reporters, "The Postal Service is a joke."

At a news briefing last week, Trump said he opposed $25 billion for the Postal Service and $3.5 billion that Democrats had sought for election administration.

"They're not going to get the $3.5 billion. Therefore, they can't do the universal mail-in vote," he said.

On Sunday, Democratic Party of Arkansas Chairman Michael John Gray said warnings about mailing deadlines are appropriate "if they are cautioning people, in the regular course of business, that sometimes mail's delayed."

Efforts to disable the Postal Service, on the other hand, would be troubling, because "it's an institution that shouldn't be manipulated for political purposes," he said.

Chris Powell, another secretary of state's office spokesman, said officials are in regular contact with county clerks, the ones responsible for actually mailing out absentee ballots.