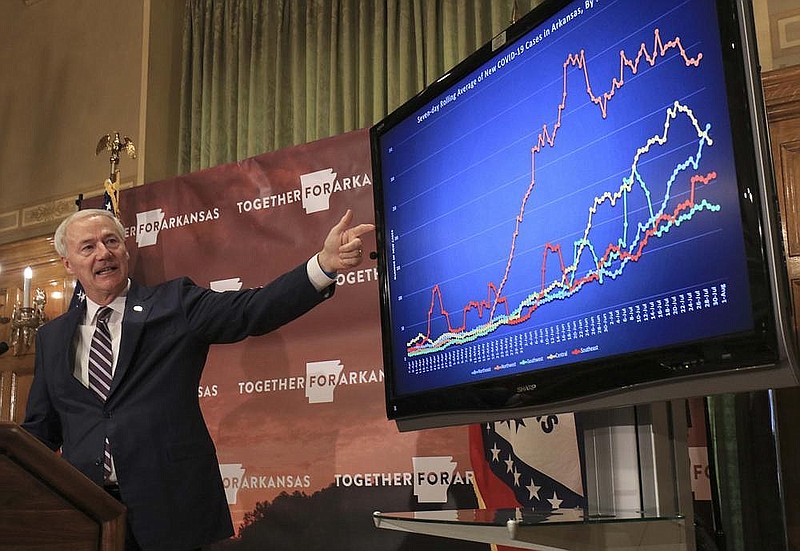 Gov. Asa Hutchinson, at his coronavirus briefing Monday in Little Rock. The Arkansas Department of Health on Monday reported 787 new cases of the virus, bringing the total to 44,597. Of those, 6,882 cases remain active. - Photo by Arkansas Democrat-Gazette/Staton Breidenthal

Gov. Asa Hutchinson warned Monday that no area of the state should be "relaxed" toward his administration's public health guidelines, as active cases of coronavirus remained near the state's high-water mark.

The Arkansas Department of Health on Monday reported 787 new cases of the virus, bringing the total to 44,597. Of those, 6,882 cases remain active.

Another 11 people died from covid-19 over the previous 24 hours, bringing the death toll to 475. Hospitalizations fell by two to 513.

Arkansas briefly hit a high of more than 7,000 active covid-19 cases in mid-July, according to data from the Health Department. Since then, numbers have dipped slightly in Northwest and central Arkansas, home to large population centers that have reported many of the state's cases.

On Monday, Hutchinson noted a troubling increase of cases in northeast Arkansas. Three of the 10 counties that reported the largest number of new cases are in that corner of the state.

"We have had a sense in Arkansas and some of the rural states that this is an urban problem," Hutchinson said. However, "There's not any area of Arkansas that someone should be relaxed and say, 'This is a covid-free area,' or, 'It's not going to touch us here.'"

When asked if he believed the statewide mask mandate implemented two weeks ago would help drive down new cases, Hutchinson said evidence points to that effect beginning after two weeks if compliance is widespread.

"It's certainly not 100% [compliance in Arkansas], but it has increased," the governor said. "If there is compliance, you'll start seeing a difference, and we hope to see that."

Data from the Health Department published Monday showed northeast Arkansas overtaking central Arkansas -- and the state's largest city, Little Rock -- for second place in the seven-day rolling average of new cases, with more than 150 new cases being reported a day.

Northwest Arkansas remained at the top of that list, with an average of more than 200 new cases being reported each day. Southwest Arkansas saw the fewest numbers of new cases.

Hutchinson said the increases in the northeast corner could be related to people commuting back and forth across the Mississippi River to western Tennessee, which has seen a similar spike.

Several employers in the region have also been tied to outbreaks, according to Health Department records.

The three counties in northeast Arkansas that had the most new cases Monday were Independence with 32, Crittenden with 28 and Mississippi County with 22.

Arkansas has received its first of two shipments of antigen testing systems from Becton, Dickson and Co., Hutchinson announced Monday, saying the machines will be deployed to local public health units, with K-12 education testing given priority.

The order, announced last week, includes enough kits to conduct 3,600 tests. The state is still awaiting delivery of those kits as well as the second shipment of machines, Hutchinson said. Each shipment has 100 machines.

"If there's a teacher, if there's a staff person, if there's a student that needs to have a quick test, then they can go there to a local health unit, get a quick turnaround on this equipment that we'll be deploying over the next three weeks," Hutchinson said.

Antigen tests have a quicker turnaround time than other lab-confirmed tests for the coronavirus; however, they are considered less accurate.

The Arkansas Department of Health does not include results from antigen tests in its case counts. Those who test positive on an antigen test are referred for further tests that are reported, said interim Health Secretary Jose Romero.

The state halted visitation to nursing homes and other long-term care facilities not long after the pandemic began in March. Visitation was allowed to resume July 1, but with conditions such as masks and social distancing to protect populations who are particularly vulnerable to the disease.

But new cases can temporarily stop the renewed visitation.

One example is Fox Ridge Luxury Senior Living, which has halted visitation at all three of its locations in central Arkansas because of positive covid-19 cases, Rodney Thomason, chief executive officer of Medical Assets Holding Co., said Monday.

"We are following state guidelines and shutting down the facilities for 28 days when we get a positive case," Thomason said.

He said a resident at the Chenal location tested positive Friday.

According to a Health Department report, the center's Bryant location has had two residents and one employee test positive, while the Chenal center has had one resident and three employees test positive since the pandemic began. The company's North Little Rock center is not showing any covid-19 cases.

There have been no covid-19 deaths at any of the three centers, according to the Health Department report.

"It's usually when a resident has gone out to a doctor's appointment or to the hospital that we've gotten a case," Thomason said. "We isolate them every time someone comes back to the facility after going out. We're strict about following policy and procedure for preventing an outbreak. We take the employees' temperatures and ask them the same questions every day."

Since the pandemic began in March, the long-term care industry has seen 1,320 nursing home and assisted-living facility residents, as well as 928 health care workers, test positive for covid-19, according to a Health Department report.

Of that number, 159 residents and one health care worker have died from the virus.

Romero also took the opportunity Monday to urge Arkansans to get their annual flu shots, which are made available around this time of year.

"We don't know what the confluence of influenza infection and covid will be," Romero said. "We know there is a press on our emergency rooms during influenza season, and one way to decompress that is to try to get people immunized."

Experts expect a record number of people to get immunized for flu this season, with manufacturers preparing as many as 198 million doses, according to the U.S. Centers for Disease Control and Prevention.