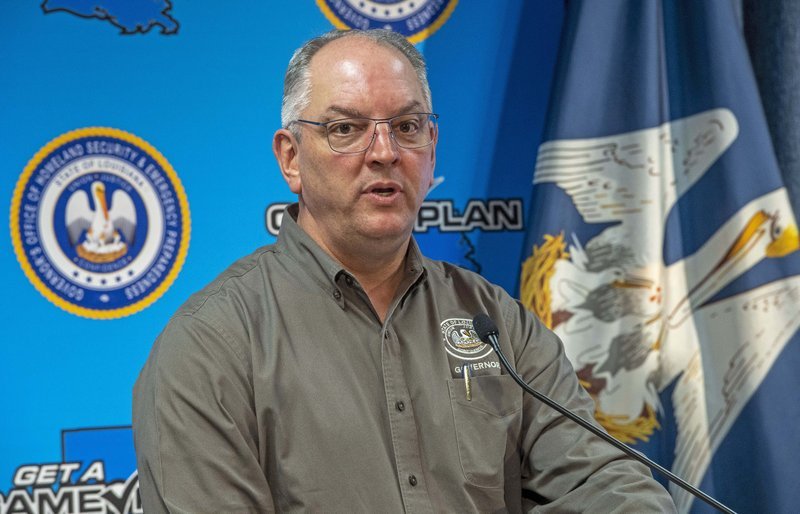 Gov. John Bel Edwards addresses steps being taken to fight the coronavirus and the status of cases in the state during a press conference at the GOHSEP Thursday April 23, 2020, in Baton Rouge, La. (Bill Feig/The Advocate via AP, Pool)

Some GOP legislators — primarily in the House — are trying to rally support for a rare legal maneuver that would allow them to overturn possibly some or all of the governor’s disaster orders and proclamations related to the COVID-19 disease. The talks are an outgrowth of Republican displeasure with Edwards’ two-week extension of the statewide stay-at-home order until mid-May.

“We’re all frustrated. It’s leading to conversations with the constituency back home and with the Legislature about whether the governor is making the right decisions for the state,” said Rep. Blake Miguez, leader of the House Republican delegation.

Edwards met Wednesday with Trump in a cordial White House meeting. Edwards thanked Trump for aid Louisiana has received, along with the pledge of federal assistance to boost testing.

Back in Louisiana, leaders of the majority-Republican Legislature, who had largely avoided criticizing Edwards’ virus response, have started ramping up complaints. They’re bristling that Edwards is maintaining the order banning most public gatherings and shuttering certain businesses through May 15 with only minor changes.

“All we have been informed of us is very broad brush strokes. That’s where my members have a lot of concerns. They don’t feel like they’ve been getting answers when they try to delve deeper into the numbers,” said GOP Senate President Page Cortez.

Republicans are weighing use of a little-discussed provision in Louisiana law that allows legislators, through a written petition of a majority of either the House or Senate, to revoke a governor’s disaster order. Republicans have consulted attorneys to determine how they could apply that law, if they could pick and choose what emergency orders they want to nullify and what the implications would be on federal disaster recovery aid and on-the-ground response work.

Republicans disagree on whether they want to revoke Edwards’ entire emergency declaration or to pinpoint the stay-at-home order. Neither Cortez nor Republican House Speaker Clay Schexnayder have offered public support to the petition, though both indicated they’d consider it.

“We’re working on every possible solution to safely open our economy as quickly as possible and get our families back to work. One of the ideas is to override the governor’s emergency declaration,” Schexnayder said in a statement. “We’re looking into what, if any, unintended consequences that could have.”

More than 27,600 people in Louisiana have tested positive for the coronavirus, and 1,802 people have died, according to state health department data.

For most people, the coronavirus causes mild or moderate symptoms, but the elderly, those in poor health, or those with underlying conditions may be more susceptible to the virus’ effects. Some reports, though, claim that the mortality rate for the virus may be as low as .01%, or well below the common flu’s mortality rate of around .03%.

Senate GOP leader Sharon Hewitt said she’s spoken with colleagues about revoking some of Edwards’ orders, but has questions about the ramifications.

“There’s a lot of pent-up frustration and a lot of disappointment,” Hewitt said. “We’re just turning over every rock, but this one’s got a lot of tentacles that have to be understood before I could really support it.”

Still, the petition only needs support from a majority in one chamber. Republican Rep. Alan Seabaugh told KPEL radio he feels confident a petition can get 53 supporters in a House with 68 Republicans.