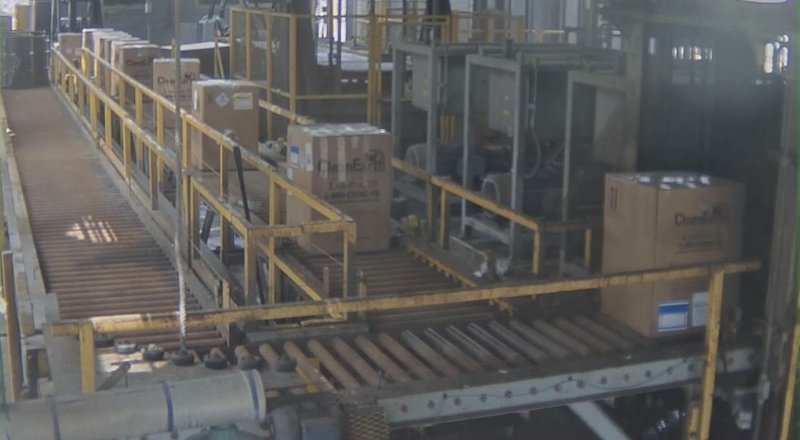 A facility photograph shows containers of covid-19 medical waste on a conveyor heading toward an incinerator inside the Clean Harbors hazardous waste plant in El Dorado. - Photo by Clean Harbors of El Dorado

A hazardous-waste facility in El Dorado is incinerating hundreds of containers full of infectious waste per week produced during the coronavirus testing and decontamination efforts taking place in the mid-Atlantic region and neighboring Southern states.

The facility, owned by the national environmental services company Clean Harbors, recently requested a temporary waiver from the Arkansas Division of Environmental Quality to expedite the incineration process for covid-19 waste during the outbreak. The agency granted the request April 14.

The temporary authorization is one of a number of requests submitted to the agency and the Arkansas Department of Energy and Environment in recent weeks seeking regulatory relief during the crisis.

Like federal environmental regulators, earlier this month the state agency issued provisional guidance relaxing testing, permitting and enforcement for regulated entities such as landfills, utility companies and manufacturing plants on a case-by-case basis if the operators of these facilities believe they cannot comply with regulations because of the outbreak.

In the case of the El Dorado facility, the pandemic has sent trailers carrying covid-19 waste to southern Arkansas for incineration.

Clean Harbors crews are in the field performing decontamination and disinfection work at grocery stores, big-box chains, schools and health care facilities around the country, a company official told the Arkansas Democrat-Gazette.

Retallick said the materials are treated as infectious waste and securely packaged, labeled and shipped by truck to one of five Clean Harbors incineration complexes in the United States. Because of its location, the El Dorado facility typically handles shipments from the eastern seaboard and nearby states like Tennessee and Kentucky, in addition to infectious waste produced within Arkansas, he said.

In a letter, the Clean Harbors El Dorado plant asked the environmental agency for temporary authorization to receive infectious waste at an area of the facility closer to the incinerator in order to protect employees and avoid high-traffic routes through the plant's warehouses.

A compliance manager with Clean Harbors submitted the request April 14. On the same day, David Witherow, a senior manager for regulated waste operations at the agency, approved the authorization for six months, according to agency records obtained by the Democrat-Gazette.

The Envirionmental Quality Division is familiar with the layout of the El Dorado facility, according to Retallick.

Containers of covid-19 medical waste on a conveyor head toward an incinerator inside the Clean Harbors El Dorado hazardous waste facility.

Containers of covid-19 medical waste on a conveyor head toward an incinerator inside the Clean Harbors El Dorado hazardous waste facility.

"They agreed that it made a lot of sense for us to minimize the movement of these containers within the facility and to expedite their incineration," he said.

Although the El Dorado site has "enormous" storage capacity for materials like the covid-19 containers, "in this particular case, our corporation has decided to prioritize it and dispose of it as soon as it is received," Retallick said. "And that's our goal," he said.

The facility most likely will continue to handle a "steady stream" of covid-19 waste, Retallick said, as waste from swabs accumulates at testing sites and protective wear is discarded from decontamination crews. A drive-thru testing site that processes 500 to 1,000 cars per day might produce several containers or drums full of testing waste, he said. The size of the approved containers can range from 5 to 55 gallons.

Testing for the virus nationwide is expected to continue to ramp up as state officials weigh a timeframe to end lockdowns and resume business activities during the coming weeks, albeit with testing and contact tracing of potentially infected individuals.

The coronavirus waste does not arrive on a reliable schedule, according to Retallick, with the volume changing depending on the activities happening in the field.

Shipments containing approximately 100 to 200 containers of the waste arrive in El Dorado once or twice a week, he said. A system at the El Dorado plant drops the sealed containers from a chute directly into the incinerator to avoid opening the containers and risking exposure.

A member of the El Dorado City Council, Willie McGhee, expressed concern earlier this month during a committee meeting about the covid-19 waste incineration expected to take place at the Clean Harbors plant, according to the El Dorado News-Times. McGhee did not return an email and phone call from the Democrat-Gazette on Tuesday requesting comment.

At the time, the plant's general manager, Dan Roblee, sought to dispel rumors about aplant shutdown scheduled for April 6-14, the News-Times reported. Roblee said the shutdown was for routine maintenance and, contrary to rumors on social media, the company was relying on mostly local contractors, not 500 workers from south Louisiana.

Retallick said the plastics and paper that often make up medical waste are combustible and the incinerator, which reaches temperatures between 1,850 and 2,000 degrees Fahrenheit, destroys nearly everything.

"It's a highly effective technology for destroying medical waste," he said.