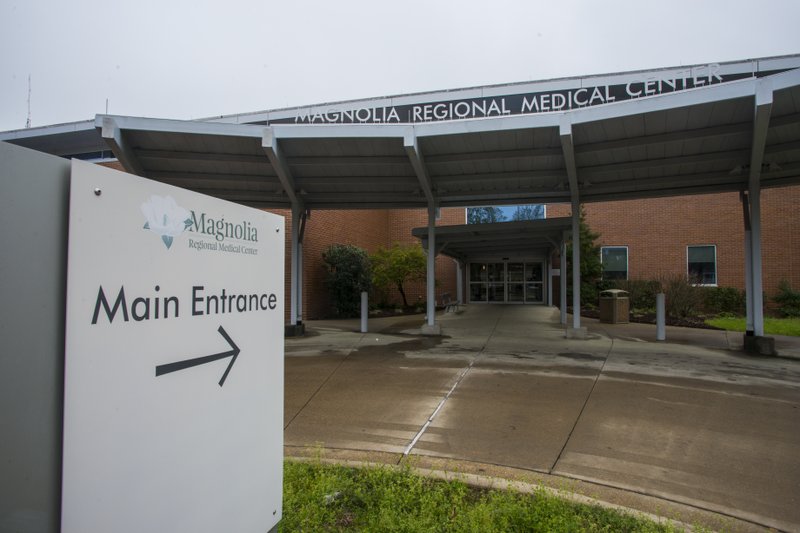 The main entrance to MRMC (pictured) is one of the only public access points to the local hospital. Visitors will be screened as they enter the doors.

Magnolia Regional Medical Center has furloughed a number of “non-critical” staff members for at least two months, according to Rex Jones, the hospital’s chief executive officer. The move took effect on April 3 after a brief MRMC Board of Commissioners teleconference.

Included in the furlough were upwards of a dozen workers, with most of the cuts hitting the administrative and clerical staff ranks the hardest. The temporary layoffs coincided with relocating all hospital entries solely through the Emergency Room entrance, which also took effect Friday.

By furloughing the employees, the hospital workers will remain on the MRMC roster and will maintain their insurance benefits, according to Jones.

“Most everyone was furloughed and not terminated,” he said. “The hope is that we will be able to bring them all back in eight weeks.”

Jones noted Monday, though, that an evaluation will be made at the end of the two-month period in hopes of reactivating the workers, but some jobs could possibly stay suspended longer.

The furloughed employees now have the option of using any accrued paid time off, if they so wish. The hospital also has the option to reactivate some of the staffers should they be needed prior to the eight weeks.

The temporary layoffs come amid a wild and uncertain financial future for many small and large businesses and services as much of the country is under lockdown due to fears of spreading the coronavirus. In Arkansas, no official “stay-at-home” orders have been put in place by the governor, but the state has banned all gatherings over 10 persons, most public events, closed schools for the remainder of the academic year, and barred all sit-down dining and closed all salons, tattoo parlors, and barbershops. Many workplaces have also ordered or at least given the option of staffers to work from home.

The orders combined with public fears have shaken communities. What used to be routine outings to most public places and businesses have now been forgone for staying inside. These trends have greatly affected outpatient services not only for Magnolia Regional Medical Center but for many clinics around the county and state.

“People aren’t having any elective testing or going to the doctor for any wellness visits,” said Jones. “We’ve advised people to wait, and they’re listening to us.”

The CEO noted that outpatient revenue’s at MRMC and its accompanying clinics are “way, way down.” The inpatient numbers have not suffered quite as much, but procedures that individuals normally would not hesitate to visit a clinic for, have now been significantly affected.

The situation with the virus has also put the hospital and many medical facilities in a catch-22. They need to be open and stay prepared for any virus threats or patients, but they also require revenues -- just like any business -- to keep the doors open to provide those services.

“[The coronavirus situation] majorly impacts us,” said Jones. “A lot of the rural hospitals are extremely concerned -- the smaller ones especially.”

Help is possibly on the way, though. The Small Business Association (SBA) is currently offering loans and that could provide a much-needed influx of funds and paycheck protections to many small or rural hospitals. MRMC on Monday applied for SBA loans. But since the hospital is still technically a city-owned facility, the SBA measures may not be attainable at the moment. MRMC is currently in the process of reforming as a non-profit 501(c)(3) corporation that would no longer be a government entity, but the conversion has not yet been finalized.

Jones stated Monday that he has reached out to U.S. Senators Tom Cotton and John Boozman, U.S. Rep. Bruce Westerman, and Arkansas Sen. Bruce Maloch for help in the matter, hoping that the federal and state legislators can help remedy the situation and bring extra funds to the hospital in a time of need. Jones stated that the federal and state legislators believe this to be an oversight by the SBA not allowing city-associated facilities to qualify for funds.

“The hope is that [upcoming legislation] will have something modified that can help those that were kind of overlooked,” said the CEO.

SBA funds for current qualifiers are expected to begin flowing within the next week or so. The SBA Paycheck Protection Program includes provisions stating that if no workers are laid off after the funds are received, the loan amount could possibly be forgiven down the road, according to Jones.

“The [legislators] are working hard,” he said. “They are going to do what they can, and I’m not worried that they are not aware of our situation. They’ve been very responsive.”

The virus situation may, in the end, provide more help to some facilities by shining and even bigger light on the plight and need for rural hospitals across the country. Aid and measures have ramped up slightly over the past year, but now they have come to the forefront of many discussions among lawmakers.

“There’s been a lot of focus on the number of rural hospitals that have closed, but I think now the light has been turned up a little bit,” said Jones.

MRMC was involved with County agencies and many other local medical facilities in the March 26 mass coronavirus screening held at the Columbia County Fairgrounds. The results, according to Jones, all came back negative. In all, 113 people showing cold or flu-like symptoms or who were thought to have been in contact with a virus carrier were tested. According to the New York Times, as of Tuesday morning, Columbia County only has three confirmed cases of the virus. The newspaper’s data was sourced from state health agencies and the CDC.