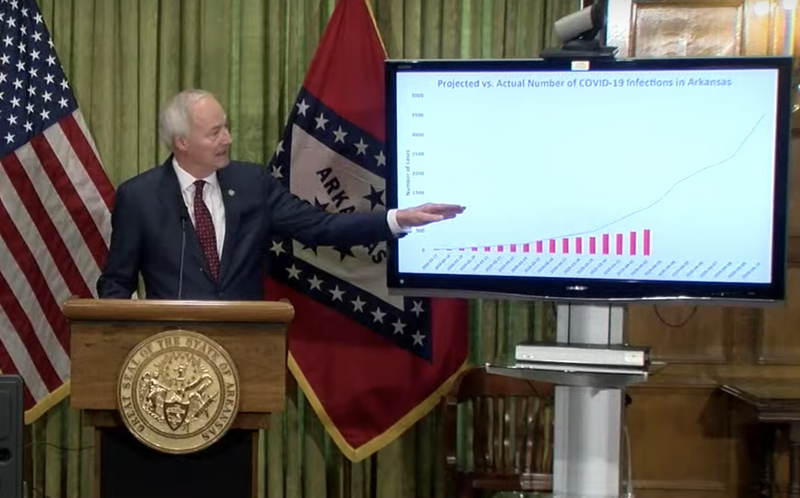 In a screenshot from a video, Gov. Asa Hutchinson shows a graphic about coronavirus projections in Arkansas at a news conference Thursday.

Gov. Asa Hutchinson doubled down Thursday on his decision that a stay-at-home order is not needed in Arkansas even as a majority of other states have implemented some form of the measure.

He pointed to data showing the number of covid-19 cases in Arkansas rising slower than initially projected. The total Thursday rose to 643 cases, much lower than the 1,000 or so cases previously expected by this time, according to a graph shown at the press conference.

Two more patients died of the virus as of Thursday, Hutchinson said, bringing the total deaths so far to 12. One was a resident of Briarwood Nursing and Rehabilitation over the age 65, Health Secretary Nate Smith said. The other was an adult under 65 who died in Central Arkansas.

He said both of the deceased patients had underlying health conditions.

Hutchinson said a stay-at-home order would be only a little different from what the state is doing now, with numerous businesses and public places including beauty parlors, dining rooms at restaurants and gyms already closed.

Even under an order like most other states have, Hutchinson said, 700,000 Arkansans would continue to go to work each day because they’re employed in jobs most states' orders have deemed essential services.

He also said a stay-at-home order would put an additional 100,000 or more Arkansans out of work, including many in the retail industry. He said companies including Dillard’s are able to continue employing at least some staff to meet the needs of the limited customers they’re seeing.

Under a stay-at-home order, Hutchinson said these people would likely become unemployed.

Smith said he agreed with the governor on the lack of need for a stay-at-home order and said current measures seem to be accomplishing their goal of “flattening the curve” so a large number of cases doesn’t overwhelm state hospitals.

Smith said 66 patients are hospitalized, including 23 on ventilators.

So far 47 patients have recovered from the virus.