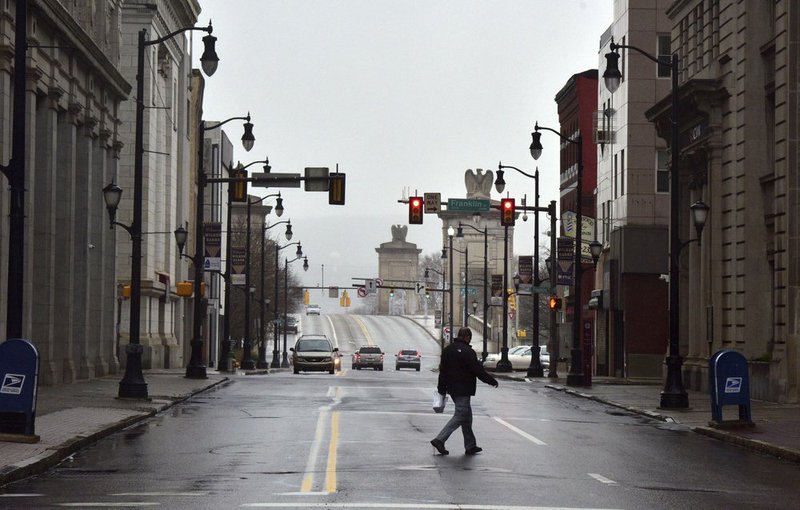 The following are developments on Tuesday related to the global economy, the work place and the spread of the virus:

BOTTOMS UP: One way Americans are coping with the new coronavirus? Booze.

Kosmal said data for the week ending March 28 will be a better indicator of ongoing demand.

Dow, which typically does not produce hand sanitizer, is doing so because the raw materials are readily available to the chemical maker. The majority of the sanitizer will be donated to health systems and government agencies.

The company began making sanitizer at its plant in Stade, Germany. Those operations are being expanded at facilities in Michigan, West Virginia, Belgium and Brazil. The Auburn site has the capacity to produce approximately 15,000 pounds of sanitizer a week, or nearly 30,000 eight-ounce bottles.

Ford is repurposing a parts factory west of Detroit to make simple ventilators starting the week of April 20.

Brooks Brothers is converting three U.S. factories to produce up to a total of 150,000 masks per day. It will also begin production on protective gowns. Japanese electronics maker Sharp Corp. converted its liquid crystal display factory and sent out its first shipment of medical masks Tuesday. The Japanese plant will make 150,000 masks a day, with production being ramped up later to 500,000 masks a day.

AIRLINES: Nine U.S. senators are demanding that airlines make cash refunds to customers whose flights were canceled during the coronavirus outbreak.

The lawmakers said Tuesday that because Congress gave airlines an “unprecedented bailout” in the economic-relief bill, they have a moral responsibility to provide cash refunds to customers whose flights were canceled and help bring back Americans who are stranded abroad.

Some travelers have complained that airlines offered them only travel vouchers, not cash refunds. Airlines have operated flights, including some chartered by the State Department, to return stranded Americans.

The letters went to the CEOs of 11 U.S. airlines, including all the majors, from Bernie Sanders, a Vermont independent seeking the Democratic presidential nomination, and eight Democrats including former presidential candidates Elizabeth Warren of Massachusetts, Amy Klobuchar of Minnesota and Kamala Harris of California.

A trade group for the airlines did not immediately return a message for comment. American Airlines said if it cancels a flight, customers can get a full refund in the form of their original payment.

Meanwhile, pilots whose medical clearance expires will be allowed to keep flying because going to the doctor for the required exam isn’t an emergency and could spread the new coronavirus. The Federal Aviation Administration’s decision to let pilots fly with expired medical certificates took effect Tuesday and will run through at least June 30. Airline pilots need an exam every six or 12 months depending on age, and other types of pilots need them less often.

STAY PUT: Travel has almost come to a complete standstill. Airports are empty and Manhattan avenues typically choked with taxis are almost vacant.

The Transportation Security Administration screened 154,080 people Monday, the fewest yet and a drop of more than 93% from last year, when more than 2.3 million people passed through airport checkpoints.

Visa is reporting a rapid slide in travel-related spending by cardholders. It’s also noticed a decline in spending on restaurants, entertainment and fuel, according to a regulatory filing. U.S. payments volume is down 4% for the month to date, with credit volume off 7%. Cross-border volume tumbled 19% for the period, on a constant dollar basis.

U.S. gasoline prices have dropped to their lowest levels in four years, and they are almost sure to fall further. Price-tracking services put the national average this week at around $2 a gallon. Some stations were charging under a dollar.

Cruise line operator Carnival says it will lose money this year and on Tuesday it suspended dividend payments to conserve cash, according to a regulatory filing. The cruise operator has taken the unprecedented step of a complete shutdown of operations.

It said that there are about 6,000 passengers on board ships still at sea that are expected to disembark their passengers by the end of April. Some of its crew is unable to return home, and Carnival will be providing them with food and housing, the company said.

MARKETS: Wall Street stocks fell Tuesday in relatively trading. The surge of coronavirus cases around the world has sent markets to breathtaking drops since mid-February, and the quarter looks to be the worst performance since the 2008 financial crisis.

ENDING PURSUIT: Xerox says it is withdrawing its bid to purchase computer and printer maker HP due to the global economic turmoil caused by the COVID-19 pandemic.

Xerox said in February that it planned to offer nearly $35 billion for HP after a lower bid was rejected as undervalued.

The companies have struggled as the demand for printed documents and ink have waned, and both had been cutting costs even before the global pandemic.

HOME-COOKED IS KING: British supermarkets just had their busiest month in recorded history.

New figures released Tuesday by market research firm Kantar show that British grocery sales jumped by 20.6% in March compared with a year earlier, making it the fastest rate of growth on record. Grocery sales totaled 10.8 billion pounds ($13.3 billion) over the past four weeks, surpassing the level seen during the busy Christmas season. The average household bought the equivalent of five extra days of groceries.

Conagra is reporting “significantly elevated demand,” with shipments up approximately 50% in the current quarter.

INDUSTRY: Less than a week after saying it planned to reopen five North American assembly plants, Ford has decided that those facilities will remain closed indefinitely. The announcement to reopen got a cool reception from the United Auto Workers union.

The spread of the virus has begun to hit Michigan hard. The TCF Center in downtown Detroit soon will be turned into a 900-bed field hospital for COVID-19 patients.