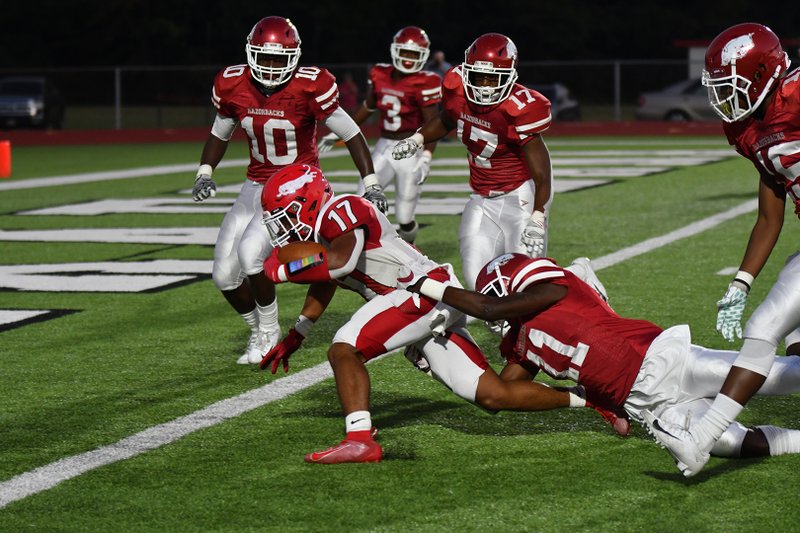 Magnolia running back Amir Cooper (17) breaks free from Arkansas High defensive back Tavree Green (11) and scrambles across the goal line after a 12-yard run to give the Panthers the early lead against Arkansas High, 7-0, on Friday at Razorback Stadium. (Photo by Kevin Sutton

With 10 seconds left on the clock in the final quarter, the Panthers, trailing by 8, kicked the ball onside and recovered it at the 50-yard line.

Magnolia quarterback Braelyn Beasley threw up a prayer that was intercepted by the Razorbacks to end the game.

Arkansas High made some key adjustments at the half to change the momentum of the game in the Hogs' favor and hold back the explosive Magnolia offense, led by Javorrea Murphey, who had 13 totes for 121 yards.

"They did a really good job with their offense," Razorback head coach Barry Norton said. "We didn't handle it as well early, but we did create some turnovers, which gave us a chance to get some points on the board."

Murphey took the lead from the Hogs at the beginning of the second half with a 1-yard run to make it 14-9 Magnolia.

The Panthers' celebration was silenced on the kickoff when Louis Blackwell returned the ball 90 yards for a touchdown, giving the hosts a 16-14 lead.

Braylon Bishop widen the gap for the Hogs with a QB keeper in the fourth, and with under three minutes to play, Keandre Wood added a 17-yard TD run to put Arkansas High on top, 30-14.

Magnolia's final touchdown came in the final minute when Khalil Collins ran the ball in from the 8-yard line.

"We settled in with it a little bit," Norton said. "The key is the first-down play. What they did is they were able to get about 4 or 5 on the first-down play, and they milked the clock. They ran the clock as much as they could to shorten the game."

The Panthers broke the ice on their opening drive when Amir Cooper dashed 12 yards into the end zone to put Magnolia up 7-0.

The Razorbacks got on the board early in the second frame with a safety off a faulty snap.

Magnolia trotted down the field on two big runs — a 45-yard bolt by Murphey and a 26-yard dash by James'Darius Smith — only to be robbed at the 1-yard line by Arkansas High, which picked up an untimely fumble.

Fumbles played a critical role in the momentum of the first half. Arkansas High had three fumbles and recovered all of them, while the Panthers had five fumbles and lost four.

Keandre Woods gave the Razorbacks the lead in the final minutes of the opening half with a 12-yard run after Arkansas recovered Magnolia's fumble.