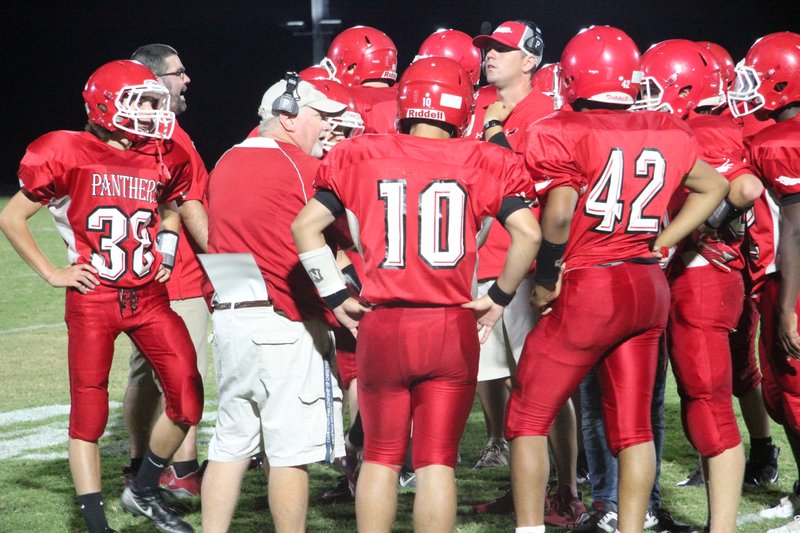 Magnolia Junior High head coach John Rich (top) talks to his team during a timeout. The freshmen Cubs are unbeaten so far this season with a 3-0 record. Some key players on the team are (from left Hunter Buford, Garrion Curry, Jacob Hebert and Keerian Smith. - Photo by Chris Gilliam

Head coach John Rich and his staff has the team clicking on all cylinders.

Opponents have been unable to stop Magnolia’s running game.

The 9th grade offense is averaging an impressive 47.0 points per game and the defense is giving up an average of 18.3 points.

After the 8th graders had a poor showing in their 28-0 season-opening loss to El Dorado, they’ve turned things around and won their last two outings by defeating Nashville 14-6 and blowing out Hope 36-14.

The freshman and 8th grade Cubs will have tough opponents Thursday when they host Texarkana.

The 8th grade contest starts at 5:30 p.m., followed by the freshmen battle around 7 p.m.

The 8th graders (2-1) got their second consecutive win, handling the Bobkittens 36-14.

Curry, who touched the ball only eight times during the game, also had a touchdown brought back following a 55-yard punt return. Classmates Kerrian Smith had touchdown runs of 46 and 71 yards, while Jacob Hebert scored from 50 yards out.

A penalty also wiped out a 45-yard touchdown run by Hebert as the freshmen racked up more than 450 yards on the ground in the game.

Magnolia failed on all but one two-point attempts and Blake Barker hit a pair of PATs.

Curry took the game’s first offensive snap and raced 72 yards for the opening score. A few minutes later, he broke loose for 23 yards and gave the freshmen a 12-0 first-quarter lead.

In the second quarter after Hebert’s TD run was brought back, Curry hit the sidelines for a 55-yard score to make it 18-0. Midway through the quarter, Hope scored on an 18-yard run but Curry responded with a 51-yard burst to make it 24-6.

On the final play of the first half and following a 30-yard run by Chase Carter, Curry crossed the end zone from the 18 to make it 32-6.

After Hope’s quarterback ran for 56 yards late in the third period, Magnolia’s final score came on a 50-yard run in the final period by Hebert to make it 52-14.

For the 8th graders, a 2-yard run by Amare Roach put the Cubs up 6-0 late in the first quarter. Lemuel Martin had a 38-yard run to start the second period and later scored from the 5 with under six minutes to play. Baker Allhands’ two-point pass to Roach doubled the score to 14-0.

Late in the third, Roach had a 75-yard run to the Hope 6. Two plays later in the fourth quarter, Allhands kept for a 3-yard TD to make the final mark 36-14.