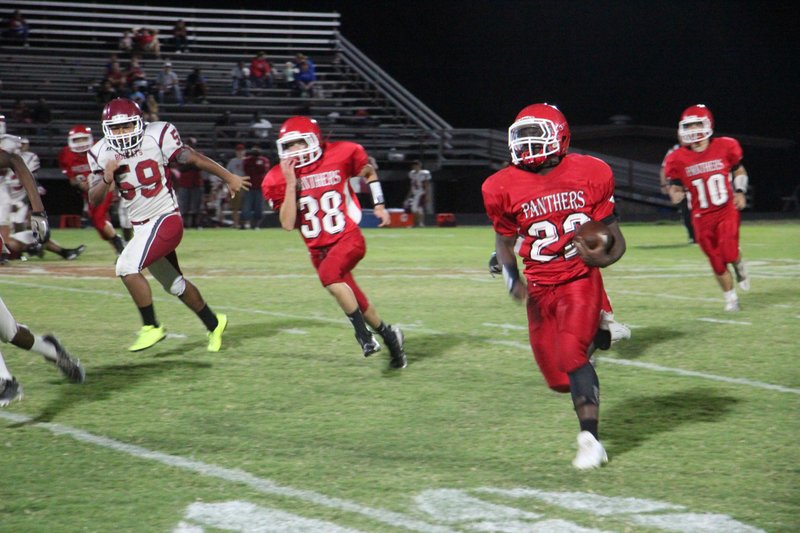 Magnolia freshman Garrion Curry races for one of his five touchdowns against Hope. - Photo by Chris Gilliam

Curry, who touched the ball only eight times during the game, also had a touchdown brought back following a 55-yard punt return. Classmates Kerrian Smith had touchdown runs of 46 and 71 yards, while Jacob Hebert scored from 50 yards out. A penalty also wiped out a 45-yard touchdown run by Hebert as the freshmen racked up more than 450 yards on the ground in the game. Magnolia failed on all but one two-point attempts and Blake Barker hit a pair of PATs.

Curry took the game’s first offensive snap and raced 72 yards for the opening score. A few minutes later, he broke loose for 23 yards and gave the freshmen a 12-0 first-quarter lead.

In the second quarter after Hebert’s TD run was brought back, Curry hit the sidelines for a 55-yard score to make it 18-0. Midway through the quarter, Hope scored on an 18-yard run but Curry responded with a 51-yard burst to make it 24-6.

On the final play of the first half and following a 30-yard run by Chase Carter, Curry crossed the end zone from the 18 to make it 32-6.

After Hope’s quarterback ran for 56 yards late in the third period, Magnolia’s final score came on a 50-yard run in the final period by Hebert to make it 52-14.

For the 8th graders, a 2-yard run by Amare Roach put the Cubs up 6-0 late in the first quarter. Lemuel Martin had a 38-yard run to start the second period and later scored from the 5 with under six minutes to play. Baker Allhands’ two-point pass to Roach doubled the score to 14-0.

Late in the third, Roach had a 75-yard run to the Hope 6. Two plays later in the fourth quarter, Allhands kept for a 3-yard TD to make the final mark 36-14.

The Cubs will play at home again Thursday, Sept. 26, against Texarkana.