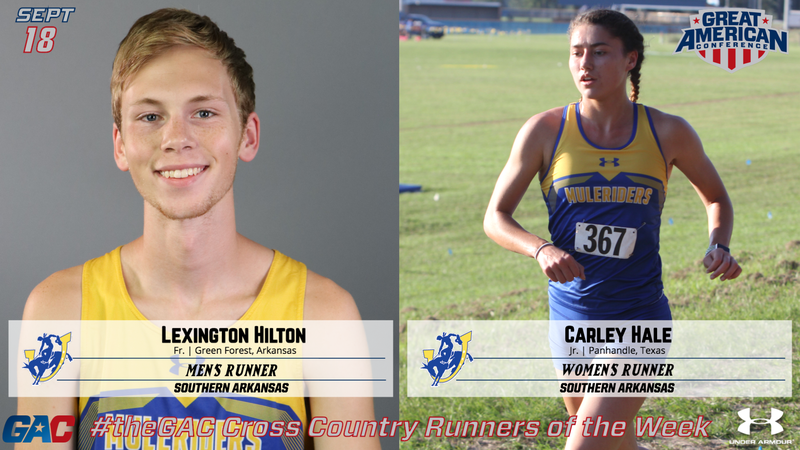 The freshman Hilton, from Green Forest, AR, received the honor for the first time in his career. He has started his collegiate career off with two top 10 finishes, which include coming in eighth at the UCA Cross Country Challenge and placing sixth last week at the Bob Gravett Invitational at Ouachita Baptist in Arkadelphia.

Hilton’s time of 26:26.7 this past weekend at the Bob Gravett Invitational saw him pace his team, as seven Mulerider runners clocked finishes in the top 16 places.

Hale, a junior from Panhandle, Texas, earned the award for the first time in her career. Entering this season, she had recorded three top-10 finishes in her career, including twice in the two meets this season.

Hale finished third this past weekend at the Bob Gravett Invitational hosted by Ouachita Baptist. Her third-place finish came at a time of 19:51.4, the fifth-fastest mark of her career.

With Hale and Hilton winning the GAC Female and Male Runners of the Week Awards, it marked the first time since Oct. 21, 2015 that SAU swept the honors and the fourth time overall as members of the GAC.

The Muleriders and Lady Muleriders, along with Hale and Hilton, will return to action Saturday at the Southern Stampede in Joplin, MO.