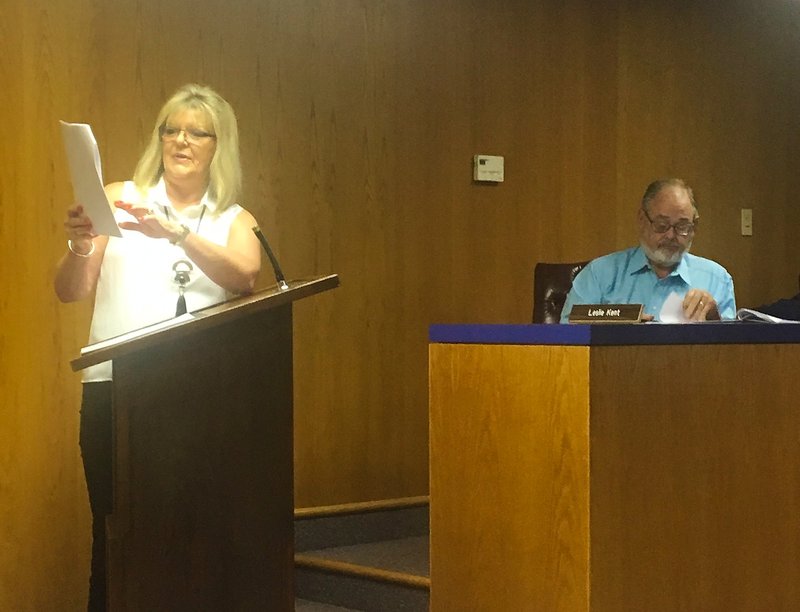 Amy Staten McNeil (left) of the South Arkansas Heritage Museum presents her case for a parking variance Monday to the Magnolia Planning Commission. Her request for fewer parking spaces than city code requires at the historic Henry Alvan Longino house in downtown Magnolia was ultimately granted after nearly an hour of talks. Also pictured is Commissioner Leslie Kent. - Photo by Becky Bell

After about an hour of discussion Monday night, the Magnolia Planning Commission granted a variance for South Arkansas Heritage Museum to open with fewer parking spots than is required by ordinance.

The commission approved the museum could open with a total of 19 parking spots — 15 in the back yard that will have to be paved with SB 2 gravel, and four more that already exist in the driveway. These parking spaces will be required for the museum’s opening that is not expected until Christmas or more likely sometime at the first of 2020.

“We are pleased to know the city council granted us a variance for the reduction of the number of the parking spaces required for the museum,” said Amy Staten McNeil, chairman of the South Arkansas Heritage Museum following the meeting. “We do want to be compliant and legal and work well with the city and be a vibrant part of downtown.”

The South Arkansas Heritage Museum is located at 317 West Main Street in Magnolia and is a 501 (c)(3) non-profit and has been operated in Magnolia and Columbia County since March 2017. It will soon serve as a public display space for local and regional historical artifacts as well as play host to events and classes for the Magnolia-based nonprofit.

“This is the largest artifact we have ever received as a donation at 3,800 square feet and at close to $300,000, and we believe it does need our protection,” McNeil said.

The Longino House was built in 1910 by Dr. Henry Alvan Longino as a family residence and was also used for his medical office, according to a packet McNeil gave the commissioners. Old maps of the area indicate the history of area parking included parking for mule or horse-drawn wagon that hitched at the curb in front of the building.

Before the commissioners made their final decision Monday, City Inspector David Nelson told them that parking in front of the museum could not be looked at the same as parking in front of the square because both areas are zoned differently. Magnolia’s downtown square is designated as a C1 (commercial) zone, but that zoning ends and changes to C2 at Madison Street. This means that, although people park in front of the museum on the street, these parking spots cannot be counted in the official spaces required for the structure.

Before Monday’s meeting, Nelson had told the museum that, based on city code, the museum would require 28 parking spaces to open.

Although McNeil told commissioners it would be extremely unlikely that many people would be at the museum at one time due to it being open for only a few hours, three days per week, Joe Pieratt, commission chairman, said he could see the place drawing attention if people thought there was going to be food there.

“If you buy a cooker and say free lunch they are going to show up,” he said.

McNeil told him the commission had nothing to worry about in terms of the museum serving food or serving liquor for that matter.

Commissioner Leslie Kent made the motion for the variance to be granted but had many questions prior to doing so. He told McNeil he was concerned about the gravel in the backyard and it taking away from the aesthetics of the property, but couldn’t see another way for the property to have the parking it needed.

Commissioner Nate Caldwell told McNeil that the reason the commissioners had to be so careful about granting permission to the museum is that they might not be the only group that asks.

“This is great, but at the same time our position has to be that if we do this we open the door for everybody else,” he said.