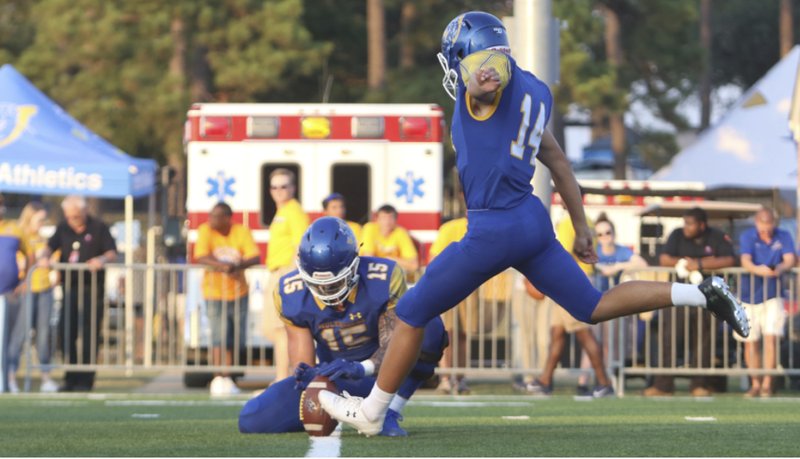 MAGNOLIA – Most of the 5,437 fans in attendance for Saturday evening's Great American Conference matchup between (RV) Southern Arkansas and Oklahoma Baptist have little recollection of many of the previous 199 wins inside Wilkins Stadium at Rip Powell Field. But the chances are that most won't forget the 200th victory at the venue. With four seconds to play in regulation and after the SAU offense drove 56 yards in a mere 28 seconds, sophomore place kicker Austin Wilkerson rewarded the Mulerider faithful by sneaking in a career-long 48-yard field goal attempt into a slight south wind as time expired to give the Muleriders a thrilling 30-28 victory over the Bison. The win pushes Southern Arkansas' Division II-best home winning streak to 17 games.

Leading 20-14 heading into the fourth quarter of play, the Muleriders (2-0, 2-0 GAC) capped an impressive 14-play drive that took 6:19 and covered 92 yards with a two-yard rushing plunge by redshirt freshman Kor'Davion Washington; the first touchdown of his collegiate career. The Wilkerson extra point with 10:36 to play in the game put SAU out front 27-14, but Oklahoma Baptist responded twice down the stretch which would lead to the last-second heroics.

On that scoring drive, junior quarterback Hayden Mallory went 4-for-5 passing for 66 yards, including a pair of tosses to redshirt sophomore Micah Small which totaled 34 yards and a 25-yard completion to redshirt senior Michael Ingram on 3rd-and-8 which moved the Muleriders to a goal-to-go opportunity.

Following unsuccessful drives from both offenses, the Bison used an eight-play, 45-yard drive (2:05) and a five-play, 52-yard drive (1:10) which sandwiched a turnover-on-downs by the Muleriders with 2:44 to play. Both scoring drives for Oklahoma Baptist ended with signal caller Preston Haire finding Joshua Cornell for scoring strikes of 23 and 24 yards, respectively.

Now trailing for the second time in the game (Oklahoma Baptist opened scoring with 9:50 to play in the first quarter), Southern Arkansas' potential game winning drive started with 1:34 remaining and all three timeouts from their own 35-yard line. After three consecutive completions from Mallory totaling 25 yards, an interception on 1st and 10 from the Bison 40-yard line appeared to all but end it for the Muleriders.

However, the Southern Arkansas defense rose to the challenge and forced a three-and-out, while using all three timeouts to preserve what amounted to 31 seconds when the final drive began. Redshirt junior linebacker DeMarcus Pegue, the team's leading tackler with nine stops in the victory, recorded two tackles on that final drive to help give the Muleriders a fighting chance.

After an illegal block on the punt return, Southern Arkansas started from their own 13. Mallory went to work as he connected with redshirt sophomore Dennis Daniels for 20 yards on the first play and after clocking it, he connected with freshman OB Jones for 15 yards up to the SAU 48. However, on the play, the Bison were called for a face mask penalty which put the ball at the 37-yard line of Oklahoma Baptist with under 10 seconds to play. Needing one play to give Wilkerson a shot, Mallory found redshirt senior running back SirCharles Perkins underneath for an important six yards. Perkins would get out of bounds which would lead to the aforementioned fireworks from the left hash following a timeout by the Bison in an attempt to ice the try.

The game winner from the Dallas, Texas, native was his third of the night and fifth of the season as he connected from 19-yards (2nd | 5:33) and 26-yards (3rd | 5:49) earlier in the contest. The length of the field goal is tied for the sixth-longest in program history and it is the furthest made attempt since a 48-yard make from Austin Shoemake in 2013 (at Southeastern Oklahoma). Additionally, it's the first three field goal game by an SAU kicker since Brad Grems was successful with three makes against Ouachita in 2016.

Defensively, the Muleriders held the Bison to just 129 yards on the ground and under 400 yards total as the visiting offense ran 79 total plays with 119 of those total yards coming in the fourth quarter comeback effort. SAU recorded 8.5 tackles for loss and was led in that category by all-conference defensive tackle Antonio Washington who finished with 3.5 tackles for loss totaling 13 yards. The Marshall, Texas, native added eight tackles, three quarterback hurries and two pass breakups as he posed as an unsolved problem to the Bison front throughout the night.

Sophomore Brock Floyd added seven tackles and senior Lorenzo Watkins followed with six stops. True freshman Shakey Robinson picked off his first career pass as he stepped in front of an attempt by Haire with under three minutes to play in the first half.

Career-highs in completions (22), attempts (33), yards (350), and touchdowns (2) from Mallory played a huge role in the Mulerider offense's success in the win as did his protection which did not allow a single sack. His top target was redshirt senior Jared Lancaster who hauled in seven passes for 131 yards including a 64-yard touchdown pass. Small added four receptions for 83 yards, both career-highs, and a touchdown. Nine players caught a pass from Mallory.

Southern Arkansas finished with 534 total yards of offense on 73 plays at 7.3 yards per play. A week after rushing for over 320 yards, it was the aerial attack that was the highlight of the night. Notable for the offense was a 9-of-16 success rate on third down as well as a 15.9 yards per completion clip.

Washington finished with a team-high 80 yards on 12 carries which included a career-long rush of 51 yards on a third-quarter scoring drive that ended with Wilkerson' second field goal of the game.

Saturday night's walk-off winner was the first via kick for the Muleriders since the 2014 home opener when Dylan Nowak pushed through an extra point attempt following a Si Blackshire to Aaron Johnson touchdown connection in the back corner of the south end zone with no time remaining. The successful extra point was the difference in SAU's 30-29 win over Southeastern Oklahoma State.

Southern Arkansas moves to 8-3 in home openers under 11th-year head coach Bill Keopple. The Muleriders have won eight-straight home openers dating back to 2012.

The Muleriders return to Wilkins Stadium at Rip Powell Field for a Family Day clash with nationally-ranked Harding. Southern Arkansas topped the No. 7 Bisons 28-23 last season in Searcy. It is the highest ranked opponent defeated by the Muleriders in program history and it was the program's first win in Searcy since the 2003 season. HU enters Week 3 at 1-1 after a season-opening loss at defending Great American Conference Champion Ouachita and a 24-0 win over Arkansas-Monticello on Saturday. Kickoff from Magnolia is scheduled for 6 p.m. and live coverage links will be made available at www.MuleriderAthletics.com.